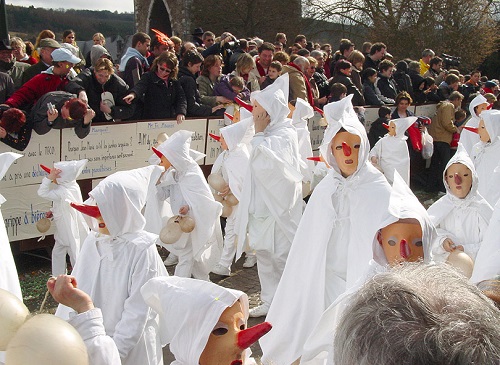 Belgium is a little country that packs a lot of punch when it comes to the world of festivals and events. With an impressive array of options ranging from film to food, from music to the downright quirky (dragon slaying or a bathtub regatta, anyone?), there truly is something for everyone.

As well as having a good time, attending these kinds of events is a great opportunity to immerse yourself in Belgian culture, get to know the character of different regions and explore new parts of the country.So, if you haven’t already filled up your year with plans, pull out your diaries and get ready to block out your weekends with fun, frivolity and perhaps a touch of madness.

A quieter month in the land of festivities – recovery from Christmas and New Year is on the cards, as is keeping warm at indoor events and exhibitions in your local area.

Carnaval de Binche
One of the ways in which you can celebrate carnival in Belgium. Step back in time, get out your cameras, and prepare for the highlight – a procession of more than 1000 costumed Gilles on Shrove Tuesday. Be ready to catch (or duck) flying oranges.
26 – 28 February | Binche | www.canavaldebinche.be

Anima Festival
A film festival dedicated entirely to animation! Films for people of all ages and so much on that you can happily watch cartoons until you get square eyes.
24 Feb – 5 March | Brussels | www.animafestival.be

Carnival of the Bears
This carnival celebrates Charles ‘The Hammer’ Martel, once a Duke and Prince of the Franks, who – as the legend goes – killed a large bear at the age of 9, saving the town of Andenne from terror. The celebrations end by the king and queen of the carnival ceremonially throwing teddy bears from a balcony out to the crowd.
26 March | Adenne

Carnival du Laetare, Stavelot
For the 515th time, Stavelot will stage this mid-Lent carnival filled with white-clad characters with long red noses known as the Blancs-Moussis. Allegedly, these disguises date back to the 16th century when local monks were forbidden from taking part in the festivities. Processions of floats with throwing of confetti and the chance to get bopped with a pig bladder make this an event you won’t forget!
25 – 27 March | Stavelot | www.laetare-stavelot.be

Zythos Bierfestival
The place to beer this April! A beer market, beer tours, tasting sessions and brewery visits will keep you busy as you put in your best effort to try some (or many!) of the 500 plus different Belgian beers on offer.
22 – 23 April | Brabanthal Leuven | www.zbf.be

Procession of the Holy Blood
Every year on Ascension Day, since at least 1303, the city of Bruges takes to the streets with a four-part religious pageant featuring the portrayal of stories from the Old and New testaments, focusing on the Passion of Christ. Legend has it that after the second crusade, a relic of the Holy Blood of Jesus was brought back from Jerusalem – forming the basis of this event.
25 May | Bruges | www.visitbruges.be

Brussels Jazz Marathon
With last year’s program featuring 250 free concerts and 700 artists spread across indoor and outdoor stages and venues, the 2017 lineup is sure to impress.
26 – 28 May | Brussels | www.brusselsjazzmarathon.be

La Ducasse
It’s a dragon slaying festival that has been listed by UNESCO as a Masterpiece of the Oral and Intangible Heritage of Humanity. On Trinity Sunday each year, the town of Mons stages a reenactment at the Grand Palace of the Lumeçon, a legendary battle between St George and a giant wickerwork dragon. Known locally as ‘La Doudou’.
June 11 | Mons | www.ducassedemons.be

Battle of Waterloo Reenactments
Reenacting the decisive Battle of Waterloo on June 18, 1815, when Napoleon’s French army was defeated. The loss of the battle ended Napoleon’s hundred days of restored power in France and brought a new era of European peace after decades of war.
17 – 18 June | Waterloo

Rock Werchter
If you want to see big names such as the Foo Fighters, Radiohead, Arcade Fire, Kings of Leon, Blink-182, Linkin Park and Lorde all in the one weekend, you better grab your tickets early!
29 June – 2 July | Wechter | www.rockwerchter.be

Gentse Feesten
There’s music, there’s theatre, and it lasts a whole ten days. The Ghent Festival has its origins back in 1843 and is one of the biggest city festivals in Europe. If you can handle crowds, there are plenty of free events to make the most of.
17 – 27 July | Ghent | www.gentsefeesten.be

Ommegang Pageant
Brussels’ oldest historical pageant takes place in early July at the Grand Palace. The Ommegang’s historical parade brings together more than 1400 performers to transport you back in time with a spectacular show.
5 & 7 July | Brussels | www.ommegang.be

Cactus Festival
Celebrating world music in a relaxed and casual style, Cactus Festival is a long running event that is a favourite among many. Aiming for artistic quality rather that commercial success, this festival brings together a broad range of musical acts with just the one stage – so you’ll never miss out.
7 – 9 July | Bruges | www.cactusfestival.be

Tomorrowland
Enthusiastically described by some as ‘without doubt the biggest and most important dance music festival on the planet’, Tomorrowland is set to take over the town of Boom for not one but two weekends in 2017. In a nutshell, if doof doof is your jam, it’s kind of a big deal.
21-23 July & 28-30 July | Boom | www.tomorrowland.com

Bathtub Regatta
One of the world’s most entertaining boat races, with over 250 participants in a flotilla of homemade vessels – that must include at least one bathtub – racing down the river Meuse.
15 August | Dinant

Festival Outremeuse
With the instructions ‘dress in black and bring celery’, one must be curious… Old customs are brought back to life with puppetry, games, dancing, sermons in Walloon dialect and indulgence in local gin. A ludicrous burial and mourning ceremony accompanied by brass bands wraps it all up.
15 August | Outremeuse

Ducasse of Ath
A folkloric procession of giants and floats that dates back to the 15th century, culminating in a hot air balloon festival on Sunday.
26 – 27 August | Ath | www.ath.be

Brussels Beer Weekend
Entrance is free and beer prices are reasonable! This will be the 19th Belgian Beer Weekend, with many small, medium and large Belgian breweries presenting their best selection of beers.
1 – 3 September | Brussels | www.weekenddelabiere.be

La Nocturne des Coteaux
See Liege softly lit up by over 22,000 candles and other lights. Music and theatrical events take place throughout the evening and an atmosphere of magic and intrigue keep the crowds wandering throughout the night.
7 October | Liege | www.lanocturnedescoteaux.eu

Hasseltse Jeneverfeesten
One for the gin lovers. The self-proclaimed past capital of gin celebrates in style with music, dance street theatre, food, flea markets, and for a brief moment in time – re-plumbing the town’s Borrelmanneke (barrel-carrying man) fountain to flow with gin.
14 – 15 October | Hasselt | www.jeneverfeesten.be

Christmas Markets
Starting in November and lasting throughout the festive season, no Christmas in Belgium would be complete without a visit. Rug up and head out to drink mulled wine and salivate over all the festive goodies on offer. There’s bound to be a market near you – and if there’s not, it’s worth a trip!

St Nicholas Eve
A special time for children. St Nicholas eve, or Sinterklass, is when the little ones put their shoes or small baskets into position and wait for gifts to be delivered overnight. The Belgian postal service on hand to assist – children who write to St Nicholas will receive a note and a surprise by December the 6th if the letter is received by December 1st. Look out for the special post boxes!
5 December | Nationwide

Christmas
This religious occasion is a national public holiday that Belgians spend attending services and celebrating with family.
25 December | Nationwide

With so much on offer, it’s almost hard to choose. What’s on your list for 2017?