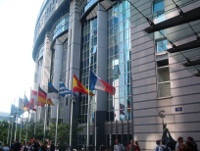 Expats in the city of Brussels enjoy a good quality of life in an attractive, trendy and cosmopolitan city. Those moving to the city can access the help of numerous organizations in finding accommodation and employment. In recent years, particularly with the rise of the EU, the capital of Belgium has become a popular choice for expats as it offers a high standard of living, mild climate and is easily accessible from other parts of Europe.

With a number of business conferences hosted in the capital of the European Union and the capital city boasting headquarters for many European companies, it has become a top choice for working professionals, particularly in fields such as public affairs, IT and social policy. Due to its setting as the base for the European Parliament and its geographical location, it has attracted a number of top manufacturing companies such as Toyota and the headquarters of NATO.When job-hunting as an expat, there is a huge advantage for applicants who can speak a number of languages, which opens up far more employment opportunities. French and Dutch are the two national languages spoken in the country, although most people are able to speak English fluently. Nationals of the European Union have the right to live and work in Belgium. When a job is secured, they are asked to register for a resident permit, which is a simple process.

Next to London, it is the second best place for the highest work wages and benefits. Having said this, workers in the country are heavily taxed, with money being ploughed back into the local economy and into services such as their excellent healthcare and education. A good quality of life comes at a price!

There are numerous universities in Brussels with the two main ones being the University Libre de Bruxelles (French speaking) and the Vrije Universiteit Brussel (Flemish (Dutch) speaking). In terms of school/college, there are a number of British education centres for expat families.

Brussels (and Belgium as a whole) is renowned for its top class healthcare service. The system is divided into state and private but fees are payable in both. Individuals need adequate cover through state or private insurance and many people receive health benefits through their employment packages.

Brussels has a lively social scene, with first class restaurants and a good range of shops. In fact, Brussels is well known for its dining culture and range of excellent restaurant facilities and varied cuisine. Of an evening, locals and tourists enjoy the wide variety of beers and excellent gastronomy.

Brussels offers a wealth of history and culture and is often nicknamed ‘The European Village.’ People living in Brussels have a varied style of architecture from different influences over the decades. Art is alive in Brussels with over 80 museums/galleries and the love of the comic strip is celebrated. The population of Brussels is younger than the rest of Belgium and the culture is a mix between old and new. The city (and Belgium as a whole) is environmentally friendly.

Brussels does not lack the pleasant scenery and benefits from some well-maintained and stunning parks, including the Park of Brussels, Jubilee Park and The Botanic Gardens.

It is easy to get about in Brussels thanks to well established public transport (including the Metro and bus and tram services). It is an easy enough city to navigate around with a car or using the public transport, as the city is small enough to have a familiar and friendly feel to it. The main reason for Brussels growth in popularity and appeal with the world of business and European politics is its location within the heart of Western Europe. It is easily accessible to all parts of the European Union and a convenient place to live for business people who commute or for a base for top International industry.

People living in Belgium can expect weather conditions similar to many parts of Europe, which include mild winters and moderate summers, with light to medium rainfall throughout the year and cloudy/humid conditions. The chances are you will usually need an umbrella to hand and good footwear but it escapes the extreme weather conditions of some other world expat hotspots.

Despite a relatively high cost of living in Brussels, it is a welcoming, compact city and there are definite perks to residing there, not to mention it being the home of Belgian chocolates!