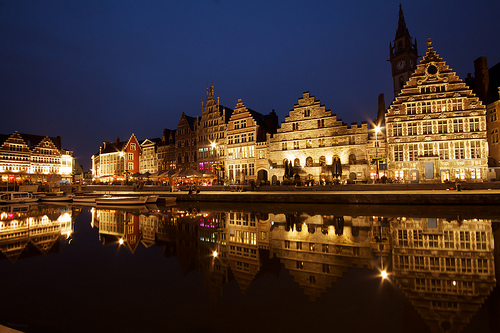 Living in a new country presents many opportunities for change; career, lifestyle, housing and finances being some of the main aspects people overhaul when moving abroad. But as well as the more prosaic aspects of life, moving also provides a chance to find new hobbies and recreational activities.

We asked Françoise Haffreingue from Visit Belgium which activities she would recommend for people who have recently moved to the country.“One of the best ways for an expat to immerse themselves in Belgian culture is to participate as much as possible. In Belgium there is always a festival or a concert going on somewhere; being more than a bystander at these events will help anyone to immerse themselves in the culture.

Sipping a beer “en plein air”, and having some frites or a waffle while you walk are must-do activities for anyone in Belgium, not just expats.”

Once you’ve filled up on frites and waffles, what should you do to continue your explorations? Here are some of our suggestions.

Watch a football match
Football is probably the most popular sport in Belgium (soccer, that is, not American football). The Belgian national football team is colloquially known as The Red Devils, and they frequently play home matches at King Baudouin Stadium in Brussels. Even if you don’t manage to catch one of their matches, there are hundreds of local teams, and finding a football match to watch is therefore very easy.

Drink some proper Belgian beer
For many beer lovers, Belgium is practically the promised land. The country has a long and vibrant tradition of brewing, with hundreds of styles of beer, including the famous Lambic: a dry, complex, often sour beer; the equally famous Trappist ales: rich, complex beers brewed in limited quantities in a handful of monsteries; and of course the white wheat beers, which have recently grown in popularity around the world.

Gorge on chocolate
In terms of food and drink, beer and chocolate are probably the two things Belgium is most famous for. While you’re in Belgium, it would be criminal to not savour all the chocolate you can get your hands on. Apart from the quality of the chocolate, the prices are also unbeatable.

Watch a classical music performance
Belgium has a vibrant classical music scene, so it’s a great place to catch a performance or two. The Bozar Theatre in Brussels is particularly well known for its classical performances (as well as theatre, dance, art, and film), and is even the setting for one of the most prestigious and challenging competitions in classical music, the Queen Elizabeth Music Competition.

Go cycling
When it comes to winning the Tour de France, Belgium is second only to France. Without dismissing the athletes’ hard work, one reason for this is probably the landscape – the northern parts of the country are mostly flat land that is wonderful for cycling. Of course, you don’t need to be practising for a competition to cycle here – simply hop on a bike and enjoy the weather, the Belgian landscape, and the fresh air.

Visit a kermesse
A kermesse is a local fair or festival in Belgium and some of the surrounding regions. In spite of their unpleasant origins – they were originally started to mark the Brussels massacre in 1370 – htoday’s kermesses are cheerful, welcoming celebrations, and a great way to soak up the local culture.

Spend the day at Brussels Park
This 200-year-old park in the centre of Brussels is the city’s largest public park, and is a great place to spend a lazy spring day. In the summer it gets quite busy, with free public parties and other cultural activities. Outside the park are the Parliament building and the Royal Palace, and inside the park you can find several sculptures, fountains, and monuments.

Visit a museum
Museums feature prominently in many European cities, but there are several very unique ones in Belgium. For example, the Megaliths Museum in Weris allows visitors to learn about these strange ancient stone monuments – the most famous of which is of course Stonehenge – and the people who built them. (The museum also has its own exclusive abbey ale which you might want to try.)

There’s also the Bois-du-Luc Ecomuseum, a 19th-century mining site that has been preserved, where you can revisit the Industrial Era and the accompanying changes in technology, society, culture, and the environment; Le Petit Chapitre Museum, dedicated to exquisitely made and dressed miniature dolls; and the Malgré-Tout Museum of prehistory with life-size reconstructions. If you’ve particularly enjoyed your beer in Belgium, there are even several museums dedicated to beer and all things alcohol-related.

Visit Belgian castles
The entire country is full of old castles, so no matter where you are, there’s probably one not too far away. However, if you have the time, it’s worth taking a trip to Wallonia, which reportedly has more castles per square kilometre than any other region in the world.

Go on a walking tour
Belgian cities tend to be full of beautiful old streets, buildings, and monuments. With the moderate weather, a walking tour is a great way to really get to know your city.

What are your favourite activities and local places of interest in Belgium? Let us know in the comments.