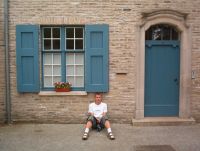 Today Brussels is best known as being the seat of the European Union and the North Atlantic Treaty Organization, as well as being one of the more notable polyglot cities within Europe (both large French-speaking and Flemish-speaking communities are resident there.) It is unfair, though, to see Brussels as simply being reserved for the affairs of the EU management. The city has over a millennium of history having little or nothing to do with this modern venture, and has undergone numerous transfers of power and innumerable changes to its basic character.

It is one of the most influential cities in the world to be officially bilingual, and even though knowing what language to be fluent in at what time may be a challenge for newcomers, the city still has many attractive features distinct to itself. Whether one wants to be treated regularly to authentic Belgian delicacies (e.g. waffles, chocolates, and Lambic beer), or to be in the company of architecture from nearly every era of human endeavor, there is much more to recommend Brussels as a place of residency than its position in the EU technocracy.Brussels communes

Brussels is divided into 19 different communes (which is closer to the English ‘neighborhood’ or ‘municipality’ than the ‘collective farm’ definition of ‘commune’ that may come to mind), with Bruxelles Ville / Stad Brussel or the City of Brussels being the most populous of these. Referring to a sector of the city as the “city” itself poses another bit of semantic confusion for North American visitors and residents, though this is a European convention and the distinction is more easily made when communicating this in either French or Flemish. This district assimilated a number of other districts into it earlier in the 20th century, though it does not claim the city’s highest population density (that honor falls upon Saint-Jesse-ten-Noode, which is paradoxically the smallest commune of Brussels.)

If “most expensive” is equivalent to “most desirable” for you, then the outlying municipality of Woluwe-Saint-Pierre / Sint-Pieters-Woluwe is by far the best choice of residence. The average cost of house ownership here is close to €400,000 (compare this to the national average of less than €150,000.) The neighborhood’s visual anchors are the picturesque and majestic Avenue de Tervueren, with its fountain pool at one end, and the Stoclet Palace, a statement piece of the Viennese Secession artists. These triumphs of architecture and landscaping make the neighborhood an ideal place for a variety of festivals, flea markets and the like, and it is by no means cordoned off from the rest of the city, as a major tram route connects the Avenue de Tervueren to Montgomery Station on the Brussels metro. Woluwe Park, meanwhile, is populated by several types of old-growth forestry and a number of exotic animals, should you desire something other than human company while in Brussels.

The municipality of Ukkel is another particularly nice residential area, also with a good distribution of urban greenery (e.g. the Verrewinkel Woods) and housing costs that generally limit it to accomplished professionals. The cost of living in Ukkel is not as prohibitive as that of Woluwe-Saint-Pierre, but can come quite close – an average of about €335,000 for home ownership. This neighborhood is or was called home by some quite well-known Belgian celebrities, including cyclist Axel Merckx and influential comics artist Hergé (he of Adventures of Tintin fame, whose creations are often referred to as the essence of Belgium itself.)

The Saint-Gilles municipality, meanwhile, may be more suitable for those wishing to live in an area with a distinctly multicultural character and a hybrid of classical and futurist urban features, while also being close to the aforementioned neighborhood of Ukkel. Fans of both Gothic and Art Nouveau architecture will find much to be charmed by in this neighborhood: its more artistic profile, courtesy of a steady population of young students, makes for a comfortable transition from the more elite character of that neighborhood (you will be greeted here by street art ranging from the sublime to the goofy.) Literally colorful and ultra-modernist boutique hotels such as the Pantone also guarantee that the neighborhood will see its share of tourists, though there are certainly far more tacky and over-hyped tourist areas in which to live – Saint-Gilles in full tourist season is hardly Miami Beach during Spring Break.

For those especially interested in the intellectual life, both the Jette and Ixelles / Elsene municipalities host campuses of the Vrije Universiteit Brussel (the Free University of Brussels), whose research papers are more heavily cited than those of any other Belgian academic institution. Some old-style pubs and breweries also exist here to slake the thirst of busy researchers.