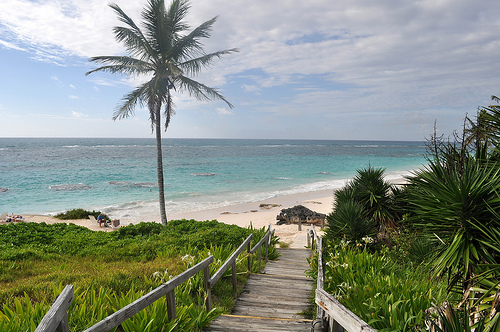 Bermuda is a British Overseas Territory off the east coast of the United States, with one of the largest expat communities in the world, in terms of percentage of the total population. Since the island is extremely small – 53.2 square kilometers, with a population of around 64,000 – the expat community is very close-knit. As a result, it’s difficult to go for too long without bumping into someone you know, or at least meeting someone who knows a friend of yours.Bermuda is also extremely vibrant, socially and culturally, so there’s no lack of things to do here. There’s always someone to meet, somewhere to go, something to see or do. However, here are the five specific things we recommend trying out before you leave.

Public transport in Bermuda is great – buses are frequent and connectivity is good, the ferry services are useful to get to certain locations, and there are plenty of taxis too (even if they run on ‘Bermuda time’, which you will eventually get used to). You can even own a car now, although there are restrictions on car usage. However, it would be a pity if you spent your entire time in Bermuda without riding the ubiquitous scooters. Many locals own their own scooters and use them regularly, but even if you don’t want to do this, we recommend that you hire one occasionally. They’re cheap, fun, and extremely convenient. They’re admittedly a bit risky, and the tourists in particular tend to ride rashly; however, with the almost painfully low speed limits in Bermuda, there’s no major danger as long as you’re not reckless.

Sure, it’s a rather touristy thing to do, and you’re not a tourist, you’re an expat. However, the tours run by the Bermuda Train Company really are charming, fun, and informative. They’re also very reasonably priced, and they’re not very long – the Hamilton tour lasts for an hour, and the Dockyard tour lasts for an hour and a half. All in all, it’s a great way to explore your new home, and you might find yourself going back for more. Especially if you have children, this is something you shouldn’t miss.

Explore the street fairs in summer

Summertime in Bermuda is great fun. The weather is perfect, and the street fairs begin, where you can enjoy the outdoors and a sense of community while soaking in the local culture. There’s live music, street food, and shopping to be done, and there are usually different themes and specialties in different parts of Bermuda on different days of the week.

Explore Bermuda on foot (or bike)

There are parts of Bermuda that you will never see unless you explore the Bermuda Railway Trail. Almost any other part of Bermuda that you encounter in your daily life will be fairly bustling. The Trail, on the other hand, is quiet and peaceful, and meanders through beaches, cliffs, woods, fields, and farms for around 30 kilometers, with some breathtaking views along the way. Bermuda’s train service ran for under 20 years, and was permanently shut down in 1948. Finally, in 1984, the land on which the railway once ran was opened to the public as a walking and cycling trail, and in the following years parts of it were improved in terms of access, safety, and beauty. (Just so you know what to expect, it’s worth mentioning that most of the trail is unpaved and uneven ground, and there are several points at which it cuts through the busier parts of Bermuda.)

You can of course watch musicals back in your home country, and in many other parts of the world too, but they usually won’t be as integral a part of the local cultural scene as they are here. Considering how small Bermuda is, it’s remarkable how regular and well attended these performances are. Most are put on by the Bermuda Musical & Dramatic Society and the Gilbert & Sullivan Society of Bermuda, but there are other theatre and dance groups as well. If nothing else, you should at least try the big annual musical at City Hall or, if you have children, the Christmas pantomime.

Those are our five must-see tips for your time in Bermuda. Do you have any other recommendations? Let us know in the comments.