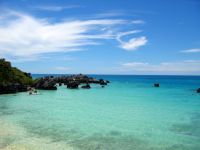 Situated about 640 miles east of North Carolina, the islands of Bermuda enjoy a subtropical climate and were, throughout the 20th century, a perennial contender in the “world’s highest GDP” contest. The island’s positioning in the ominously named “hurricane belt,” and in the legendary Bermuda Triangle, has not provided enough of a deterrent for a steady stream of new arrivals to the island. For British nationals in particular, the islands have a special attraction. Developed nations featuring an expatriate community of Brits may now be the rule rather than the exception, but not all such nations offer that rarest of commodities in “Old Blighty” itself: regular sunshine with tropical breezes.

Another reason for its attraction to British citizens is the cultural familiarity that comes from the islands’ history as a British settlement from the early 17th century, during the reign of King James I. A distinctly English character lives on in many aspects of island life: English is the official language here, and, unlike in Jamaica, there is a surprising absence of local creoles or ‘pidgin’ English (the other major European languages remain a minority language to keep the tourist industry smoothly functioning). Rest assured, the English language spoken is not of the North American variety either: for example, government officials’ names are generally prefaced with “the Honorable…”, and they are referred to as MPs rather than as congressmen.Bermudian banknotes also bear the image of the Queen upon them, even though the local currency’s fortunes rise and fall in accordance with those of the U.S. dollar rather than the British pound.

English influence upon Bermuda was confirmed when key events such as the English Civil War spread all the way to the colonies there. British residents can also be proud of the colonizers’ being ahead of the “green” trend by about 400 years, as some of the first wildlife conservation laws in history were enacted to protect the natural assets of the islands.

Bermuda has a starring role in the informal archipelago of islands that comprise the world’s offshore tax havens, and companies as prominent as Google have transferred billions in revenue to the country in order to avoid tax liabilities (a move severely frowned upon by the Tax Research group in London). Much like other island nations that have come to be known as offshore banking centers, taxation on Bermuda is largely done through a rigid import tax, than via personal or corporate income tax (and, unlike the Cayman Islands, there has been no recent talk here about supplementing the import duties with the glorified income tax known as a “community enhancement fee”).

Now that we know a little about its reputation, we won’t do ourselves any favors by pretending that the average price of Bermuda housing is modest. Local realtors and other parties with a definite ‘angle’ may downplay these costs, but impartial reports have shown average housing costs ranging from $900,000 to $1.5 million. Some parcels of land, meanwhile, are still available for those willing to make a $40 million wager on 450 meters’ worth of beachfront.

Much of the current pricing is intimately tied in with the population density on the islands – it is, in fact, 9th in world rankings for population density as of 2010 census results, with the Caribbean island of Saint Martin following closely behind. Of course, this is something of a given when considering the country is also 230th among 249 world nations in terms of total land area. However, population density here is no more synonymous with squalor than it is in affluent regions like Monaco or Singapore, and overpopulation-related problems like homelessness are nearly nonexistent within Bermuda (the 2000 census counted fewer than 40 of these unfortunate souls).

More so than the costs of housing, the price of keeping an automobile fueled up can be significantly higher than what they would be in the U.K., and thrice what they would be in the United States. Bermudan residents, whatever their level of income, will be wise to plan on walking and cycling to as many destinations in the country as they feasibly can. The costs of automobile insurance can be prohibitive, as well.

Though the island is able to closely replicate many aspects of English social life, there are a few features that are missing. For example, the university life that adds character to so many English and American cities is conspicuously absent in Bermuda (the only institution of higher education within Bermuda is a community college conferring two-year associates’ degrees). Fans of the National Health Service will also find no direct equivalent within Bermuda, and the country follows an American pattern of charging for health care despite its many other salient British features.