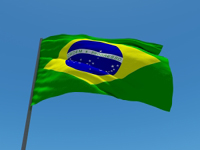 Brazil is one of the world’s fastest growing economies, an emerging global power, and a major tourist destination because of its rich cultural history, its buzzing cities, and its varied landscape, from the dense, exotic jungles to the long coastline with fantastic beaches. It’s no surprise that the country is one of the major expat locations in the world.

In many ways, Brazil is an easy country for expats to settle into. The population is multicultural, and is rather friendly and welcoming to outsiders. However, learning a local language is always a great idea. It is possible to get along by associating mostly with expats who speak your language, but it’s not easy. Every now and then, you are bound to find yourself in a situation where knowing at least a bit of the local language will help. Moreover, you’ll have a much richer experience if you interact with the locals – for which, in Brazil, you need to know Portuguese.Brazil is not only the largest country in South America, but the largest Portuguese-speaking country in the world. The majority of the population speaks Brazilian Portuguese, which is also the country’s official language.
If you’re looking at a long-term stay in Brazil, you would do well to formally learn the language and attain some fluency in it. However, if you don’t expect to be there for long, you might prefer to simply pick up bits of Portuguese as you go along. Either way, here are a few important phrases that you should probably commit to memory.

• Você fala inglês? (Do you speak English?)
If you know no Portuguese at all, this phrase will be particularly useful in the first few months. It will at least help you to find someone who speaks English (or whatever language you need), and it will serve you in most situations – on public transport, in government offices, in shops, and on the street. If you’re outside the cities, you may not have much luck finding English speakers, but in most urban areas, it’s not too difficult to find someone who speaks at least rudimentary English.
• Eu não entendo. (I don’t understand.)
Another useful phrase for the first few months when you can neither speak nor understand Portuguese. It won’t necessarily help the conversation along, but it least you will be able to make it clear that you don’t understand what is being said.
• Por favor fale mais lentamente. (Please speak more slowly.)
As you pick up bits of Portuguese, you may have more of a problem with the speed at which people speak, rather than the actual words that they are saying. This is a polite way to ask them to slow down and speak at a pace that you can manage.
• Você pode me ajudar? (Can you help me?)
This is a phrase that’s useful in all kinds of situations. You may need to have the rest of the conversation through signs and gestures, but at least you now have a polite way of getting people’s attention.
• Pois não? (Can I help you?)
You may not end up using it much yourself, but you’ll hear this one a lot – from shop staff, from waiters in restaurants, and in plenty of other situations. Literally translated, it means “Because no?”, but the speaker is essentially asking if you need help with something.
• Quanto custa? (How much?)
Probably the most important phrase when you go shopping.
• Onde está…? (Where is…?)
Sooner or later, you’ll find yourself in a situation where you need directions. The phrase may not always be grammatically perfect, because Portuguese verbs change according to the number of objects in the sentence and their respective genders, but it’ll still work.
• Desculpe-me. (I’m sorry.)
Most people will probably understand the English word “sorry”, but saying it in Portuguese will definitely come across as more sincere.
• Obrigado/ Obrigada. (Thank you.)
Again, most people are likely to understand “thank you”, but being able to say it in Portuguese shows respect and a desire to fit in to the local culture.
• Não há de quê. (You’re welcome.)
It’s also a good idea to know what to say when you’re the one being thanked. (In more casual situations, the preferred phrase is “De nada”.)