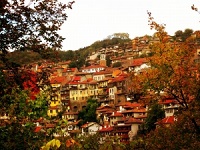 Bulgaria’s rolling mountain ranges, spectacular beaches and historic towns attract a steady stream of visitors and expats. Bulgaria is a unique country with many benefits. Its proximity to many other countries allows for convenient travel. Bulgarian cuisine is delicious and healthy, and the people are often warm and generous. The country is often regarded as a photographer’s paradise because of the many interesting places to see and things to do. For those who want to explore Bulgaria, here are 5 things you should do.

Bulgaria’s renowned winter sports resort, Bansko, is just as fun in the summer months too. The town of Bansko lies in southwest Bulgaria and sits at the foot of the Pirin Mountain.It is about 160km from the city of Sofia. The rich cultural history of the mountain resort has earned it a spot on the list of World Heritage Sites. The town’s architecture dates back to the Bulgarian revival period and some of the magnificent sites to visit include St. Trinity Church and the village of Banya, about 5km from Bansko, which has open-air mineral pools that are known to have healing properties. The resort offers great conditions for skiing and snowboarding and there are also some good restaurants serving traditional cuisine.

When in Bulgaria, a visit to the Blue Rock Nature Park in the city of Silven is a must. The park forms the backdrop for the city and at the nature reserves; you can hitch a ride on a chair lift and experience the brilliant beauty of the landscape. You can also choose to walk up the hill. This is about a one and a half hour journey. Also a popular site in Sliven is the Karandila, which stands 1050m above sea level. There’s an interesting rock formation to see here, called Hulkata. The rocky overhang features a hollow space in the center and one of the more interesting folk legends surrounding this site is that those who pass through the middle would emerge a different gender!

The Yagodina Cave in the Buynovo Gorge is the longest cave in the country and the longest in the Rhodope Mountains. It is mainly composed of marble and has many levels. You can enter and exit through two openings that have been artificially created for visitors. The entrance leads to corridors and galleries on the cave’s lowest level. Those feeling a bit more adventurous can also explore the winding corridors on the other levels.

Take a cycling tour through the Balkan Mountains if you’re in the mood for some energizing activity and fresh air. The tour will cover the north and central regions of the Balkan Mountains. You will be rewarded with views of the lush green valleys and breathtaking cliffs and hills. A cycle tour usually begins in Goliam Izvor and ends in the town of Veliko Tarnovo. Along the bike ride, you will also encounter some charming Bulgarian monasteries, old churches, traditional homes and scenic countryside views.

This is another of those favorite Bulgarian destinations that are steeped in folklore. Legend has it that these lakes were created from the tears of a female giant weeping for her beloved. These glacial lakes are situated up high in the Rila Mountains. The lakes are frozen during winter and so the best to visit them would be during the summer months. They sit one above the other in a valley and have a network of waterfalls and streams connecting them. The lakes have interesting names; Tear Lake is named after its crystal-clear water, next is Eye Lake, Kidney Lake, the Twins (which turn into two smaller lakes during dry periods), Three-leafed Lake and Fish Lake.

One thing you shouldn’t do when living in Bulgaria is to put off learning some Cyrillic. It may take a while to get the hang of it, but it’s worth it because you can connect more easily with the locals. Plus, depending on translators can be time consuming and expensive. You will also be forced to rely on their interpretation of what is being said, something that can prevent you from having an enriching experience.