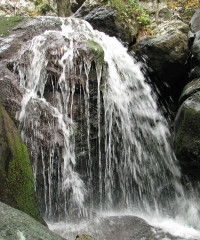 So what is the pull towards rural Bulgaria for expats? Well, there are a variety of reasons, and probably the biggest is the ability to romance with the idea of running your own business in a beautiful rural idyllic spot, miles from the clamour and din of city life. When you have been used to a routine of 9-5 with hours of travel or mixed shifts where your body is unsure it ever really functions properly then the idea of working for yourself and running your own guest house, so being able to work from home, becomes a more reachable goal and not just a distant glimmer on the horizon.

The spas of Momin Prohod were used in Roman times. It is said that the hot mineral water which is some 65 degrees C, heals bones and has a profound effect on the joints, peripheral nervous system and respiratory system, if they are ailing.

The village of Kostenets has its very own mini waterfall, of the Stara River, at the base of the Rila Mountains. It has an open air swimming pool which is filled in summer with the curative mineral water. There are mineral baths, where for 1 lev you can bathe your aching limbs in the crystal clear hot mineral water. There are many walks which lead up the Rila Mountain and into the Rila National Park. There are backpackers hostels or huts along the way too. With such a wonderful combination of healing mineral water, beautiful mountainous scenery and fresh air, is it any wonder we picked Kostenets to be our new home. So far there are not too many expats here, however in Dolna Bania close-by they are developing a new Golf Course which will contain a complex of secure new villas. There is a flying school nearby which has a private landing strip. This area is gearing itself to move up into the world of eco-holidays.

In the winter time the change from autumn to winter is a very dramatic one and the climate plummets in what almost seems like overnight. Then the magic of winter takes over, blankets of snow which are ideal for all winter sports enthusiasts, especially with Borovets only 20 minutes away. Borovets is being developed at the moment into what is going to be known as Super Borovets, so many small villages will be engulfed along the way. Kostenets village has the right environment for its own winter resort, should it be developed and it is very central especially as the railway line runs through Kostenets Town.

The most striking thing about Bulgaria for me is its almost internal mixture of history through the ages of people almost in the same street. When walking through the village you can see the older generation, still dressing more traditionally, tending their animals and crops. The daily ritual of taking the cow and 2 goats for a walk is quite a spectacle, especially as in the same street the trendy teenagers walk together talking on their mobile phones and listening to their MP3 players.

A lot of the middle generation have been lured to the city as daily commuters, for work. Most gardens have their own vegetable plots and the tatties are planted in late March after the ground is ploughed by the horse or oxen. Our neighbour has a beautiful horse and cart and he goes about his business in the same way he probably has for over 60 years. Yet at the end of the street when he turns into the road he is met with the modern day speeding car. Both seem to blend in harmony as they are part of everyday life, yet to us expats we stop and wonder at them for a few moments.

This is an emerging country which appears to want to step right up into the 21st century, whereas I feel I am keener to look back over my shoulder.