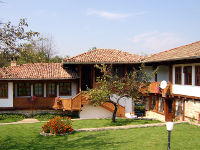 Bulgaria is increasingly becoming a popular destination for permanent living, as seen by the statistics of the British Embassy in the country, which states that there are now approximately 3000 British expats residing in Bulgaria. More than 20 percent of these have taken up permanent residence in Veliko Tarnovo and Gabrovo. These regions draw expats from across Europe, as well as vacationers. Bulgaria’s appeal lies in the fact that living here is relatively cheap as compared to other European countries.

The region of Veliko Tarnovo in north central Bulgaria has become home to many expats because it is known to be excellent for living, working or even simply retiring.It offers pleasant summer weather and a comfortable pace of life, along with high-quality medical facilities. It lies equidistant to the international airports of the capital Sofia, Varna, Plovdiv and Burgas. Overlooking the Yantra River, Veliko Tarnovo is equipped with all the facilities of a modern town. It is also a place steeped in history, having been the historical capital of the second Bulgarian Empire between 1185 and 1396. You will find remnants of its rich history all over the region in the form of ancient monuments, churches and monasteries. Today, it stands proud as a contender for European Capital of Culture in 2019 because of its art galleries, museums and theatres. Expats can also avail of several leisure and sports facilities, shopping malls, restaurants and nightclubs. The locals in Veliko Tarnovo are friendly and the quality of life is good due to its clean air, safe streets and excellent weather.

To the north of Veliko Tarnovo lies a flatter region that is less picturesque, but where the property prices are the lowest. Pavlikeni, Polski and Trambesh are popular destinations here, where one can buy excellent accommodation for a very economic price.

The mountainous area to the south of Veliko Tarnovo offers magnificent scenery, and the property prices are likely to be higher here, although it may be possible for expats to avail of some bargains, especially in the municipality of Dryanovo.

The rural town of Elena also has a considerable expat population. It lies to the south of Veliko Tarnovo, in the central Balkan mountain range. Here you will find plenty of small rivers and brooks surrounded by forests that serve as home to many indigenous animals. Elena is a popular mountain resort and is popular for its local cuisine. The town has retained many architectural ensembles that date all the way back to the Bulgarian National Revival, which began around the middle of the 18th century.

The Bulgarian town of Tryavna is in central Bulgaria, and is located on the Tryavna river valley, near Gabrovo, on the northern slopes of the Balkan range. It is a striking town with remarkable renaissance architecture from after the Ottoman invasion. You will find here beautifully constructed houses, schools and churches, decorated with murals and wooden carvings.

Bulgaria’s capital Sofia is also a popular choice for expats from all around the world. Diplomats, businessmen, consultants and other professionals of various nationalities live in neighborhoods such as Sofia Business Park, Tsarigradsko Shose Boulevard, Mladost 4, Monastery Lawns quarter and Istok quarter. This is the economic center of the country, and it houses many native and global companies. Expats usually reside here for professional reasons, in rented accommodation, and move to other places after a few years.

This is a spa city with roughly 30,000 inhabitants. Bankya is situated on the western outskirts of Sofia and attracts many expats, especially from Greece and Italy, and some from the United Kingdom. However, certain areas in Bankya are prone to land subsidence. There are also strict regulations laid down by the municipal authorities, and there could be consequences if these are flouted.

Expats have taken up permanent residence in many other cities of Bulgaria too, as well as in villages and even remote rural areas. Their motivations are varied, ranging from a love for the region to business concerns. In 2008, a year after Bulgaria became a member of the European Union, the property market in the country peaked. There has been a considerable fall in prices ever since, and they reached their lowest in 2012. Today, property prices being as stable as they are, property provides excellent value for money for any expat.