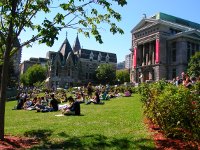 Public education in Canada is free of charge for all citizens, though “free” should not be taken to mean – as it often can – a product or service of poor quality. In 2010, the OECD [Organization for Economic Co-operation and Development] ranked Canada favorably among the rest of the industrialized world, with several Canadian provinces lagging only behind the Shanghai province for global reading proficiency. The nation as a whole placed 6th in the world – well ahead of the U.S. or U.K. – after data from the OECD’s International Student Assessment was collected (notably, it achieved this while spending far less money per pupil than either of those nations.) To put it simply, even state education in the country is nothing to scoff at, and some provincial initiatives – such as having a maximum number of students allowed per classroom teacher – aim at maintaining this standard through resolute measures.Strengths of Canadian Education

More impressive is the fact that public school systems in areas with a significant expatriate population – particularly Ontario – continue to achieve at a high level despite potential language and cultural barriers. The Conference Board of Canada, while outlining an ambitious program to overcome rival Finland in global education rankings, identifies several other strengths of Canadian pre-university schooling: one of these is the nation’s placing its most intense focus upon the turbulent high school or secondary school years and minimizing the dropout rate during this period. Relative to other industrialized nations, Canadian education excels at its high school graduation rate, which itself feeds into a rate of 4-year college completion that outpaces its ‘rival’ countries.

You may begin enrolling your child in school when they are either (depending on the Canadian province of enrollment) four or five years old. The provinces of Quebec and Ontario offer a junior kindergarten or pre-school that allows for public schooling to begin at four years of age.

Pre-university education in Canada is broken down into grade level groupings that differ by province, and only (in the case of Alberta) follow the United States convention (i.e. the elementary level being comprised of kindergarten through fifth grade, with junior high school comprising the next three levels, and senior high school comprising the final four.) In no case, though, does pre-university education extend beyond a 13th year of schooling, unless individual students’ poor performance requires them to repeat a failed grade level.

The situation regarding private schooling in Canada (up until the secondary level) is an interesting one: as in the U.S., it is a path taken by a minority of Canadian parents (only about 5%), yet the Conference Board of Canada still notes that “traditional” (read: “public”) schooling is on the decline. Traditionally, private schooling and home schooling have been sought out by parents who are skeptical of a “one size fits all” state education, but before deciding to go the more costly private schooling route, it’s worth understanding that public schools in expat destinations like Ontario are fairly “decentralized” in terms of the decisions school heads make regarding their curriculum. In other words, school principals can decide on class materials from a list of private providers, and have similar freedom when it comes to hiring teachers and staff. With this in mind, parents may wish to first consult with the heads of individual public schools to see if their curricula are in line with their own ideals before going down the ‘private’ route.

There are, of course, points of contention that expats have habitually raised in regards to Canadian schooling. Some have complained, for example, that too much time is spent deviating from the core curriculum in order to educate students on social and ethical issues that could be learned from participation in other social organizations (or, indeed, from parents themselves.) Transplants from the United States, in particular, have commented on how a socialization-centered schooling sometimes causes a lag of a full grade level when it comes to fundamental areas like grammatical knowledge and arithmetic skills. Again, though, parents should not be discouraged until they have made personal efforts to determine what the curriculum is like at the different schools in their province.

Expatriate parents should be careful to not lump all Canadian provinces together in terms of their cultural norms, since those of Francophone Quebec, in particular, differ from those of Anglophone provinces like Ontario or Manitoba. French language schooling is mandatory in Quebec since the local passage of the Charter of the French Language bill in 1977. While these rules do not apply to foreign-born residents of the province, and publicly funded English-language schooling is available throughout the province, the status of French as an official language here is still a salient fact that should be taken into account when considering the socialization of one’s child here.