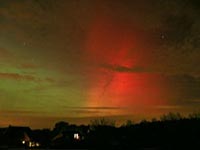 Canada is a country of great natural beauty and it offers much variety to those who wish to explore the land. Here are five uniquely Canadian experiences that every expat must have.

The Aurora Borealis is nature’s very own light show in the sky. It is a natural phenomenon that occurs when charged solar particles interact with atoms in the earth’s upper atmosphere. The result is a spectacular rainbow of colors that is highly visible during the period from January to March in the Northwest Territories. To catch a glimpse of this otherworldly occurrence, you can visit the Aurora village in Yellowknife, which also has heated outdoor tepees for guests. Other activities here include dogsled rides along frozen lakes, ice fishing, snowmobiling and snowshoeing. Remember to keep a keen watch for the elusive lights as they move quickly across the sky.Take a fossil safari

Head to Alberta’s Dinosaur Provincial Park, which has the highest concentration of dinosaur bones in the world, and let it sink that about 75 million years ago, giant beasts walked the very ground you are standing on.

The many coulees and riverbeds in the park are home to numerous fossils. When you first see them, you’ll probably think they are part of the sandstone. But when you look closer, you will be able to see the several textured vertebrae that stick to the hand when wet. The park is also a great place to get really close to nature. You can book a comfort camping suite with a riverfront view, which has all the essential amenities such as an electric heater, fan, cooking utensils, refrigerator, and even a barbecue grill. You can have the best of both worlds here – being out in the wild, but without the worry of running into a creature of the wild.

Your suite will even protect you from pesky mosquitoes with its net draped queen-sized bed. The park is also a place of cultural heritage as many sites representative of the native culture have been found. More than 500 Native American tipi rings are even visible above the badlands.

This next experience is one that golf enthusiasts will surely enjoy. The 18-hole rock and sand Yellowknife golf course plays host to a unique tournament called the Canadian North Midnight Classic, played every June 21st weekend on the longest days of the year. The tournament begins at exactly 11.59pm on Friday night and continues through the twilight hours until the sun begins to come up at around 2am. The tournament has continued through the years since 1962 and draws golfers from across the country and around the world. The golf club underwent major expansion and renovation in 1999 and modern artificial turf technology was used to develop ten new holes. The clubhouse also offers food and bar services for its visitors.

The Citadelle in Quebec is the largest fort in North America, covering an area of 2.3 sq. meters. The French began constructing it in 1750 and it was later completed in 1850 by the British to protect against a possible American invasion. Since 1920 it has been the home station of Canada’s Royal 22s. A one-hour guided tour will take you through the regimental museum and many historical sites. You can also catch a glimpse of Rachel, a very powerful nine-ton cannon with a three-kilometer range. In the summer, the changing of the guard ceremony is held every morning at 10am and the beating of the retreat happens when the shift ends at 7pm on Fridays, Saturdays and Sundays.

In Churchill, you can have the opportunity of observing polar bears in the wild. Every fall, crowds of visitors gather here for a chance to get close to these beautiful animals. Churchill in Manitoba is considered to be the polar bear capital of the world. The best viewing times are in October and November. The local tundra vehicles are the perfect way to see the bears as they can move smoothly over the snow while keeping passengers protected from curious bears. The wilderness lodge provides comfortable accommodation during your time here and it is located along the bears’ migration route.