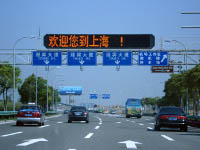 Driving in Shanghai can be tricky if you’re not used to it. The traffic is chaotic on city streets, drivers do not always stop at red lights or yield to pedestrians and common driving practices include tailgating, switching lanes without glancing into the rear-view mirror and signaling a turn only once the vehicle starts to turn. As daunting as it all sounds, it is still possible to drive safely in Shanghai if you follow a few simple rules.

• The busiest time on the city streets is early morning when people are making their way to work. This is the time when a steady stream of buses, taxis, cars and trucks snake around each other, determine to get ahead in any way they can.There are also two-wheelers crossing the streets and surging forward and around you at random. At first, it may appear impossible to hold on your own in such chaos, but once you’re used to the Shanghai streets, you will probably start using some of the same techniques. The best way to deal with the situation is to be as cautious as possible, especially before you shift lanes. Also, always wear a seat belt.

• Using your GPS is helpful for finding your way around the big city. Instead of inputting a street name or number into the system, it may be more efficient to feed in a crossroad junction. In many cases, GPS systems do not provide accurate real-time information under the city’s many elevated highways, so its better to memorize the details of where you need to go before you drive under these highways.

• Parking may be difficult in Shanghai due to the scarcity of space. To avoid getting fined for illegal parking, pay a fee to park on a guarded street. This fee is sometimes negotiable. You can even park in the public parking lots outside many of the skyscrapers. Remember to look into your rearview mirror before opening your door if you have parked roadside because there may be bicycles and other vehicles coming up from behind and many times, they drive extremely close to the parked cars.

• Gas stations can be found all over the city. In case, you’re in a new location and can’t find one, use your GPS system to take you to the nearest station. In China, gas stations are full service and you can inform an attendant how much you want to pay and they will fill your tank accordingly.

• Two thirds of collisions are known to occur on expressways due to rear-end collisions, speeding and not keeping a safe distance between vehicles. The traffic police often issues advisories urging both drivers and passengers to avoid speeding and driving under fatigue; to check the condition of their vehicles before driving, and also weather information and roadmaps.

• Driving a scooter is very common in Shanghai. If you decide to try driving one, remember that scooters in China have thin wheels and the tires are not always of good quality. This makes it slightly dangerous to drive in the rains. You can exercise caution by slowing down when making sharp turns on slippery roads. Also avoid braking too hard, as it can cause the scooter to wobble and the wheels may even slip out from under you as a result. A scooter is a convenient way to get around the city, but make sure you always wear a helmet and pay attention to the traffic around you.

• Nanjing Lu and Huaihai are famous shopping streets in Shanghai and almost always packed with tourists. Driving is tricky here because taxis stop without warning. Be patient if you’re making your way through these streets and keep a quick foot on the brakes. If you want to switch lanes, do so slowly and with caution. However, avoid hesitating or waiting around too much. Driving in Shanghai has improved in recent years but it is still rare for drivers to yield in order to let you in.

• Lastly, cars rule the roads in Shanghai mostly ignoring the throngs of pedestrians that are trying to cross. The city is also highly populated and pedestrians still jaywalk, even though it is illegal. Therefore keep a lookout for people while driving, irrespective on whether there is a crosswalk or not.