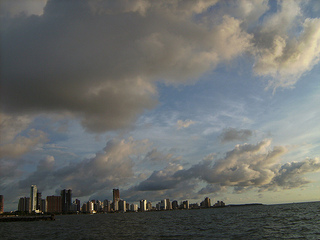 There’s plenty to love about Colombia – the diversity and beauty of both its geography and culture, and the promising and already growing economy are the major factors that draw people to it. In the last several years, the country has started to become increasingly popular among expats as a result of the numerous improvements it has managed to effect, especially the overall decrease in crime and violent conflict.

However, this is not to say that all the problems have been solved.It’s true that it is now possible to live your day-to-day life in Colombia without encountering any more crime and violence than you would in most other major cities of the world; however, this is only possible by consciously making it a point to stay away from certain places and situations, and even then, the chances that your safe bubble will suddenly be pierced are fairly high.

Colombia has been a country in turmoil for decades. The peak was probably the 1990s, when there were almost daily reports of kidnappings, murders, terrorist attacks, and other incidents of conflict between state forces and a variety of armed groups including drug traffickers and leftist guerrillas, with atrocities on both sides. However, in the last decade or so, the violence has decreased, especially in the urban areas. There are still violent clashes on a frequent basis, but these are mostly in the countryside, and only occasionally does the violence enter the cities.

Most expats tend to live in the cities, and therefore don’t need to worry too much. If you’re travelling between cities, find out about whether the countryside you will be travelling through is safe. It’s often wiser to fly rather than to travel by road. Within your city too, find about which areas are safe and which aren’t, and stick to the safe areas.

Today, the kind of turmoil you are most likely to encounter within the cities is a political protest. These are usually non-violent and safe, but there are instances when they do turn violent. It’s therefore best to stay away from protests and demonstrations as far as possible. If you find yourself inadvertently in an area where a protest is under way, leave as soon as you can, even if it seems peaceful. For those who are politically inclined and feel strongly enough about a particular issue to participate in a related protest, it is important to be fully informed about the topic, the aims of the protest and the kinds of activity you can expect there, and the people you are going with. Consider the risks before you actually decide to go.

The greatest risk in Colombia today is petty crime in urban areas. Muggings, ATM and credit card fraud, street scams, pickpockets, burglaries, and car theft are common. Some the techniques used are unfamiliar to outsiders – criminals are known to impersonate police officers and “confiscate” the victim’s cash, claiming that the notes are counterfeit; others are known to offer drugged food and/or drink to a victim in a bar or restaurant (or spike the victim’s drink), and then rob the unconscious victim. Another trick involves cab drivers – the driver turns into a deserted lane, where his accomplices rob the passenger.

It’s important to be cautious and alert at all times, and avoid taking unnecessary risks such as accepting food or drink from strangers, leaving a drink unattended, and using ATMs when they are either too secluded or have too many people around. If you need to use cabs, use a booking app or a specific cab service rather than hailing a cab in the street.

You should also ensure that you always have the numbers of your embassy and of the local police, just in case you need them. It is also advisable to get some self-defense training or brush up on your skills. As always with self-defense training, remember that the point is not to be a hero or teach criminals a lesson, but to carry yourself with more confidence so that you’re less inviting as a target, and to know how to get out of a dangerous situation in case you find yourself in one.