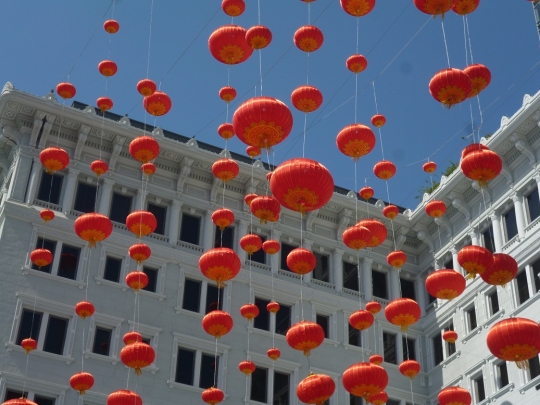 One of the problems of living in Hong Kong, though not everybody would see it as such, is that barely four weeks after one’s Christmas bells have fully jingled along comes Chinese New Year and another sizeable dollop of festive gluttony. So this can literally prove a heavy time of year in which great discipline is required if body weight be maintained and the year of the pig greeted in a less than piggish manner!Thus with Christmas decorations neatly packed away the traditional red and gold trimmings are retrieved from the attic in preparation for the Chinese New Year, celebrations of which entail lanterns, good-fortune couplets, gatherings and yet more good food. You’ll appreciate therefore that this is not a good time to embark on that half-promised post-Christmas diet regardless of any well-intentioned New Year dedications.

Indeed, hot on the heels of that Christmas turkey, pudding and mince pie onslaught come provident fish, coconut milk deserts and turnip cakes galore so you can appreciate the difficulty in which Hong Kongers may find themselves. We gladly passed on much of the Christmas fare but did enjoy a scrumptious lunch at the Grand Buffet restaurant located high on the 62th floor of the Hopewell Centre in Wanchai. This is certainly a room with a view made all the more interesting by the hourly revolution of the restaurant itself thus offering an intriguingly different aspect with each replenished plateful of goodies; however, trying to find one’s table each time could prove a little tricky as it never quite seemed where you’d left it – and that was without any alcohol!

The food was delicious especially the Indian curries which Hong Kong buffets do exceedingly well, admittedly not quite in keeping with Chinese New Year but never mind, more of South Asian tiffin you might say; a novel festive touch nonetheless came in the form of little piggy-shaped cheesecake deserts which everybody loved. This lunch, to mark the first day back at work after the three-day Chinese New Year break, was organised by my old company who kindly invited us along. Considered an auspicious event, most firms do this to ensure a favourable year ahead; regardless of any luck heading our way I reckon a marathon lunch is an ideal way to spend ones first day back. 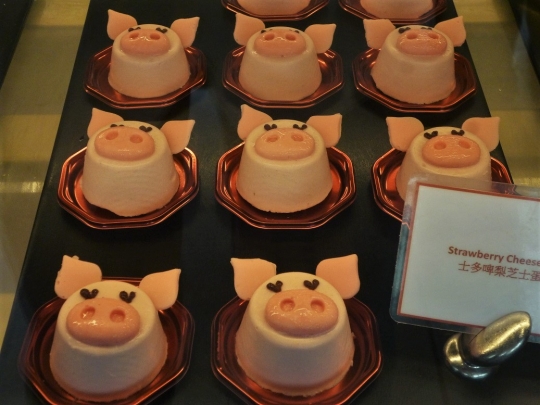 Incidentally, they hold a similar celebration in Japan for the Gregorian New Year though in true Japanese style this tends to be more a serious booze-up at the office which, although a bit early in the day even for me, I regard as yet another agreeable method of celebrating the day. So Hoi Gung Daai Gat (literally: start work, big luck) is a familiar refrain amongst staff here in Hong Kong and the distribution of little red Lai See packets containing a token cash gift is handed out by those generous employers keen to follow tradition. My old company were certainly generous as even we qualified for the honour and I left fifteen years ago – how wonderful is that?

Not only did the restaurant provide a vertiginous outlook over myriad high-risers stood matchstick-like below, it also provided a poignant reminder of how the city has developed over the past three or four decades. When completed in 1980, the Hopewell Centre, distinctive for its circular plan shape, was at 216 metres the tallest building in Hong Kong and the second tallest in Asia. It remained so in Hong Kong at least until 1989 when the nearby Bank of China Building emerged; today, Hopewell Centre is only Hong Kong’s 20th tallest – how’s that’s for some lofty development!

Meanwhile back in the village where we live celebrations weren’t quite as raucous as in previous years. Before, it wouldn’t be unusual if a series of loud firecracker blasts had you jumping right out of your skin, they really did – heart attack material. It’s not so much the loudness but the suddenness which catches you unaware, never quite knowing when peace will be shattered next. These detonations accompanied by a smoky gunpowder-whiffing residue are of course intended to frighten away any evil spirits that might be slinking around those shaded nooks and crannies.

This year however, I fear the evil spirits may well have gained the upper hand which may not bode too well for the villagers’ health, wealth and happiness. You see, on several occasions what should have been a robust ear-shattering report of about fifteen seconds duration turned out instead to be a lonely and quite pathetic little phut; and then nothing, silence. Almost palpable would be the perpetrator’s disappointment; as if emitting an unworthy puff of flatulence when you’d be happier expressing a good deal more!

Well, should any major bad-luck issues affect our lives this year then we’ll know to blame the person who signed off on this dodgy consignment. Perhaps a damp cracker problem we wondered though apparently issues can also arise if the explosive innards are not tightly packed.

Our village seniors had not only wasted a stash on this ill-considered purchase but risked arrest and prosecution too; fire crackers being illegal here since the 1967 riots when the last thing government wanted on the streets was a readily available explosive material, nowadays it might be regarded as more of a health and safety issue. Here in the lawless New Territories however, it would be a brave copper who intervenes in our centuries-steeped rural affairs where blind eyes are turned in deference to the powerful village clansmen, they who gleefully stick two fingers up to authority.

On the whole, we enjoy the atmosphere and thrill of the moment but are equally pleased when peace returns. But, as mentioned, this year saw minimal disruption and I’d doubt if anybody important even heard, which is a shame, I mean if you’re going to do something illegal you might as well try and get it right.

Back to the time of year and not many people realise Chinese New Year is also known out here as the Spring Festival, thus heralding the start of our favourite season in which the weather starts warming, interesting creatures reappear and, appropriately, the bright orange firecracker vines bloom across the territory; a magnificent display this year, even they seemed louder, if only in hue, to those manmade boomers!

And so this is the year of the pig and what will it mean for us? According to our learned feng shui masters it won’t be too wonderful for those born in the year of the pig which surprises me as I thought they’d at least score a good’un. I’m a rooster and we’ve been told it’ll be fine for study or work issues but mightn’t be too good for financial or health matters – I’ll have to be careful!

Even Hong Kong is in for a cautious but steady year while across the border a well-targeted Peppa Pig campaign brings home the Chinese bacon, not surprisingly, for the character’s British originators. Do you know which animal of the Chinese zodiac you were born under? Why not find out and see what piggy’s year has in store for you? But now I’m off shopping, the festivals of Ching Ming and Easter are suddenly on the horizon, party food will be required and, needless to say, the larder’s terribly bare…