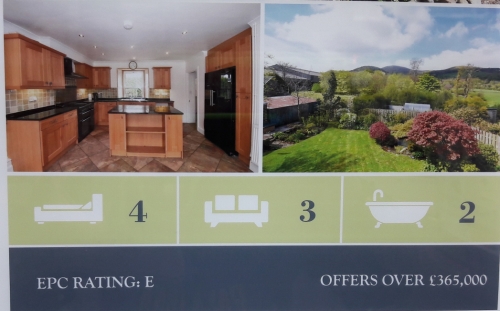 “We want to buy a house,” we told the solicitor.

We’d arrived in Edinburgh the day before, and had wandered into this particular real estate office, because it was next door to the coffee shop where we’d just had our lunch.The solicitor was a kind-faced man in his late fifties, with an intelligent expression and a breathtaking knowledge of Scottish real estate history that he was eager to share. He seemed to love his job, and to believe with his entire heart that all things were possible through the magic of real estate law.

“It needs to be in the catchment area of the school where we registered our children this morning, and we need to move in no later than eight weeks from today.”

At this point, the solicitor blinked.

We had arrived at the beginning of June, two months before the start of the Edinburgh Fringe Festival, an internationally renowned, month-long, citywide arts and music extravaganza. Our two-month rental would be ending just as the festival kicked off, and there would be no accommodation available anywhere in, or even near, the city. Our children would lose the school places that we had taken such pains to arrange, and the dog and cat would arrive from California with nowhere to go.

When we bought, and later sold, our house in California, the process had seemed straightforward. Buyers and sellers engage their respective agents. Agents arrange viewings, buyers choose a property, and negotiations ensue. Sometimes there’s a bidding war. Paperwork threatens to drown both parties. Then, finally, buyer and seller reach an agreement, and money and keys change hands, with or without a mortgage. Then people move in.

We were lucky. Our California house had sold the month before we arrived in Edinburgh, so we arrived with cash in hand, and with no need to attempt to acquire a mortgage without a credit history in our new country. There were plenty of houses available in our price range, and they seemed to stay on the market for quite a bit longer than similar properties in Los Angeles.

Should have been simple, right? Walk into the solicitor’s office, arrange some viewings, then point to our favorite and say, I’ll have that one.

But that’s not how it works here.

Scotland—and from what I’ve seen, it looks like it’s only Scotland—has a system called “offers over.” How it came to be, or why it persists, I can’t imagine. It appears to benefit no one, save for a seller who isn’t in any hurry to unload their property. It works like this:

1) The seller advertises that they will be entertaining offers “over,” or “in excess of” the listing price.

2) Interested buyers instruct their solicitors to send a “note of interest” to the seller’s solicitor. This lets the seller know that the potential buyer is interested in making an offer. The note of interest is not legally binding.

3) When the seller’s solicitor has collected enough notes of interest—“enough” being an arbitrary number determined by the seller–the seller declares a closing date. From what I understand, this, too, is completely at the seller’s discretion. It can be a week, a month, several months, or even longer.

4) After the closing date has been declared, the seller’s solicitor informs the solicitors representing interested buyers, who then inform their clients.

5) The buyers who are still interested then instruct their solicitors to submit offers in excess of the listing price. These offers are legally binding. No one sees the offers at this time.

6) On the closing date, the seller opens the offers like so many birthday presents, and then chooses the one they like the best—not necessarily the highest bid, but the one that tickles their fancy for whatever reason.

People in Scotland are exceedingly kind, considerate, and polite. A Californian in our solicitor’s position—advising a customer who wanted an unreasonably fast move-in–would have laughed loud and long. Our solicitor merely cocked his head and frowned thoughtfully.

“Well,” he said, “you could start by arranging some viewings.”

The viewing process, too, is quite different from the process in California. When we bought our Los Angeles house, we engaged a buyer’s agent recommended to us by a friend. The agent interviewed us about our needs and preferences, and then took us out every Sunday to open houses and viewings, until we found the right property for us.

“She took you out?” our Scottish solicitor asked, as if he hadn’t heard correctly.

“Every Sunday,” we replied. “Drove us around from house to house, in a late-model Jaguar with leather seats and air conditioning.”

I wasn’t sure which part was causing him to squint like that—the driving around of customers, the realtor’s fancy car—Scottish real estate solicitors work for a very modest flat fee, rather than for a comparatively immodest percentage of the sale price–or the idea that somewhere the climate might require air conditioning inside an automobile. His heart audibly stopped when he calculated how much our seller’s agent had made from the sale of our California home.

“She also gave us snacks,” I added sheepishly.

In Scotland, solicitors for the buyer and seller work primarily behind the scenes. It’s up to buyers to scout out properties that might fit their bill, and to contact the sellers’ solicitors for viewings. The property owners themselves conduct the viewings and open houses—something that our California sellers’ agent had strictly forbidden us to do.

Our assignment was now clear: find potential properties and then set up viewings. We retreated to our rental to do some research.

The UK has numerous helpful websites for people seeking properties. Prior to our arrival, we had been looking at RightMove. Our solicitor also recommended ESPC, as ESPC allows users to search for properties within specific school catchment areas, and also to access the all-important Home Report.

The Home Report gives buyers information about the age and condition of the property, including any problems or issues. Problems are rated by severity, with “1” being cosmetic or trivial, and “3” being a substantial, and likely expensive problem that must be resolved before move-in. The report also details any work or alterations that might have been done, the council taxes (like property taxes) that the homeowner would be expected to assume, the property’s energy efficiency rating, and, most importantly, the property’s estimated market value.

The market value, one would think, would give a buyer at least a tiny bit of guidance about how much over listing price they should offer.

We only visited the first house because it seemed like a steal. With seven bedrooms and five baths—something that would normally be laughably out of our price range—it seemed too good to be true. The owner, a self-satisfied fellow, was confidently expecting an imminent flood of offers starting around 30% above asking. How could we not check it out?

What nobody mentioned was that the house itself measured only around 1,500 square feet. You can imagine how difficult it would be to cram seven bedrooms and five bathrooms into that. Unlike in the United States, property listings here rarely provide information about the dimensions of the property. Occasionally they might reveal the measurements of individual rooms, from which one might painstakingly calculate total square footage, but more often than not, this information is simply not available. One more caveat for the emptor.

We arrived to find that House #1 had been amateurishly subdivided into rooms small enough to provoke in each one, a separate attack of a claustrophobia I hadn’t known I’d possessed. The bathrooms were similarly sized. When we came to the squat-toilet in one of them, I thanked the owner for his hospitality and fled.

The owner of the second property we viewed made certain we knew she was in no hurry to sell. She would have no problem, she said, sitting around, happily collecting notes of interest for a year or more. The house was gorgeous, in perfect condition, and a short walk from our children’s school. It was ideal, but we didn’t have a year to wait for her to decide first on a closing date, and then on what she considered a desirable offer. Nor did we have the money to make an immediate offer the owner couldn’t refuse. We submitted a note of interest, but never followed up.

The third house was a heartbreaker. I’d been stalking it for months on RightMove. The square footage was listed—and it was generous. The house sat on a hilltop overlooking a charming section of town, and was a good, brisk walk from the school. Moreover, it had a separate “granny flat,” which I had fantasized about renting out as an AirBnB. The wrap-around grounds were somewhat decrepit, but in an interesting, children’s-ghost-story kind of way, and there was a narrow, covered stone staircase that led down to the street. I was ready to buy before we saw the house. I’d been ready since before we’d arrived in Edinburgh.

What I hadn’t been ready for was the mold and water damage. These were mentioned in the home report as issues that would need remediation, but wouldn’t necessarily prevent move-in. I disagreed. Just as I hadn’t known I was claustrophobic, nor had I been aware of any environmental allergies. Unfortunately, my eyes, nose and throat began to burn the minute I stepped inside, and continued for quite a while after we left.

The place had great bones, but I couldn’t live in a house I was allergic to.

There were a few days of despondency after that. Wondering if we’d have to start all over again with the school-search. Hoping we wouldn’t have to kennel our pets for a month or more, while we searched for a house from God-only-knew-where during the Festival. Terrified we’d have to buy the allergy-house out of desperation.

And then we found it.

The interior decoration wouldn’t have been my first choice, but it was tasteful and newly done. The location was less than ideal for my husband’s commute. But the house was unarguably beautiful, in good repair, and located in an excellent neighborhood within the boundaries of the school catchment area.

Most importantly, the owners were ready to make a deal.

They’d had one offer—just one–with contingencies. We made one without. An hour later, our solicitor called to inform us that the owners had accepted.

We moved in six weeks later.

Scotland is a country of breathtaking natural beauty, where opportunities for adventure abound. But the real adventure is in real estate.