It’s easier to adapt to a new life overseas when you move with a spouse or partner. You can laugh (or cry) together at the inevitable trying times that arise. It’s more of a challenge to move abroad on your own, and it can be even more intimidating for single women than it is for single men.

Some retirement destinations are far more suitable for single women moving abroad than others. One place that could be a good fit for many women is Álamos, Mexico.Álamos is a small colonial town of fewer than 25,000 nestled in an inland valley surrounded on all sides by endless mountains and beautiful, wild countryside. Located in the Mexican state of Sonora, it’s one of the best places to find well-preserved Spanish colonial architecture in the Americas.

Álamos was founded in the late 17th century, after silver was discovered in the area. The huge wealth generated by the mines allowed the residents of Álamos to build dozens of colonial mansions and hundreds of colonial homes throughout the downtown.

The silver eventually ran out, and the silver barons and their crews moved on. Álamos began to decline after Mexican independence from Spain, and when the city was invaded during the Mexican revolution in the 1920s, its population was decimated. Most of the old mansions, hotels and beautiful municipal buildings fell into ruin.

In 1948, Álamos was discovered by William Levant Alcorn, a farmer from Pennsylvania. Alcorn saw the potential and began restoring Álamos one building at a time. Paying just $50 to $100 for many of the mansions, he made a fortune promoting Álamos and selling real estate. His daughter continues to sell real estate here today.

Álamos was declared a national monument in 2000 by President Zedillo, and was named a Pueblo Mágico in 2005. The latter is a designation reserved for towns that offer a “magical” experience, thanks to their beauty, historical significance and cultural riches. Álamos has recovered and retained its original 17th-century charm, with stately colonial mansions, cobblestone streets, narrow alleys and passageways, a magnificent church and a beautiful town square. 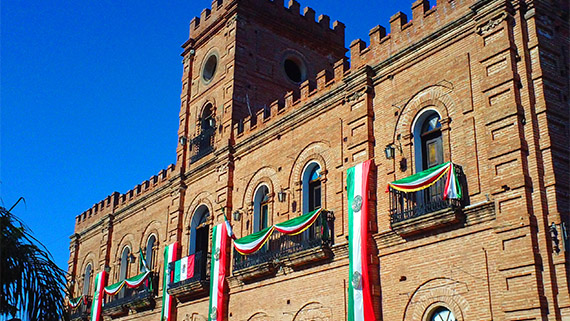 This retirement haven is also particularly suited to single women. After dozens of discussions with women considering moving abroad, I’ve noticed common concerns. Granted, some of these are important to men, too. Here’s why Álamos is a particularly good fit for women:

Walkability. Álamos is a very walkable town. We had a car when we visited, but we only used it to travel to another city. Otherwise, all of the cafes, restaurants, markets, shops and events were within easy walking distance.

One caveat: Walkable as it may be, the town is hilly. So, if you have difficulty walking, I’d stick to the level parts of the historic center. If you don’t mind some mild exercise, you’ll find some great views from the colonial neighborhoods that surround the historic center.

An active social life. Álamos has maybe two places that qualify as fine dining, one of which has an active and fun bar on the premises. Otherwise, there are a dozen or so down-home restaurants and cafes offering standard Mexican fare at affordable prices. If you’re after lots of fine-dining choices and a hot nightlife scene, then Álamos won’t be for you.

But there’s plenty of less formal social activity in Álamos, and more than is typical in most overseas venues of interest to foreign retirees. Walking tours of the downtown take place every Saturday. Each week the group visits three different historic homes. There are film nights, book clubs, a history association and festivals are staged regularly in the town square. All this is in addition to lots of dinners held in people’s homes, afternoon and evening cocktail hours and girls’ nights out.

Personal safety. Álamos isn’t completely crime-free. Nowhere is. However, this is a very safe place for a woman to walk the streets alone, day and night.

A rich cultural experience. While the resident expats add financial support to many local efforts and engage in the community, they don’t dominate the culture. Álamos is unquestionably a Mexican town, from the piñata store to the coffee roaster to the local mariachis and especially the tortilla man, who brings warm, fresh-baked tortillas to the neighborhood on his motorbike every morning at 7 a.m.

Opportunities for volunteering. If you’d like to give something to the community, you have plenty of options. There are frequent fund-raisers supporting the local community, especially the education of local young people, and opportunities to become involved with the library, theater, clinic and beyond.

Women are the leaders of the expat community in Álamos. They stay in touch with each other, hang out together and support one another when they need it.

Men are welcome in Álamos, too, of course. And the women in Álamos are not all necessarily unmarried or unattached, though many are. Some women who live part-time in Álamos leave their husbands at home for the winter season, while others come as a couple. Some live here full time, while others come for the North American winter. There are a handful of people in their 30s and 40s, but most female expats here are between 50 and 90. Some of the most active community participants are over 80.

I’ve spent time in dozens of expat venues that are suitable for women on their own. But Álamos is more than suitable. Here, women can thrive and truly belong. In Álamos, single women don’t have to worry about “fitting in.” They’re at the core of the community.