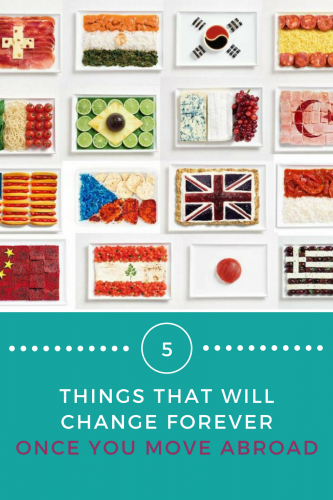 Moving abroad is not easy. You face new challenges, you get to know parts of you you didn’t know existed, you’re amazed at yourself and at the world. And with this change of scenery, there are some things that will forever change for you as an expat.

I’m talking about little habits you took for granted no longer applying; strengths you didn’t realize were strengths until you visited home again; even the words you use every day changing their meaning.Having changed my own zip code several times (Russia, Israel, US and now France), I’ve gathered the 8 things that will just never be the same as an expat…

Fear is No Longer a Bad or Foreign Thing
When living abroad, especially in a country with completely different culture and language you cannot even begin to grasp (hello #triptojapan), everything from catching a cab, to renting an apartment, to navigating a city is unfamiliar, scary, and holds a high risk for failure. At first you think you might die from the stress alone – “And I don’t even know how to call an ambulance around here if I do drop from a heart attack!”

But you don’t drop dead, and eventually, this adrenaline becomes a part of who you are. You recognize it immediately. You know how to deal with it. You become vividly aware of how you work under pressure and how you can work better. You learn more about yourself than you’d ever expected to learn, and when this experience is gone, while you might not miss the uncertainty, you certainly miss the rush.

“Home” and Its Value Change in Meaning
Home was a very specific thing for you back… well back home. Seriously in your native country – home might be a house with a yard; or a tiny apartment in a big city; it could be a place within quick driving distance to your family or the town you grew up at – and now only go to see your family all nostalgic on the holidays. The things is you used to know what home means, and now you don’t.

How can you have a “home” if you can’t see your best friend every weekend? Or no longer have your “regular” coffee place. As an expat, you realized quickly that what you thought of “home” was inaccurate – because you can make home anywhere. You start to understand what really is crucial to your life and what really makes a “home” for you – cutting out what everyone expected you to need. Home is where you feel at home, welcomed, embraced, relaxed and love. Cheesy as it might sound – home is really where you heart is.

Words Aren’t Taken for Granted Anymore
Whether you learn the local language or just talk to foreigners who speak your native tongue fluently, you start examining your own language as more than just fact. Nothing makes you stop and think quite like a local asking you what “cinch” means, and why it defines as both “easy” and “to tighten something”. You took it for granted before, but yeah – why does it mean that? What’s the story behind it? Since phrases are built off of culture and history, what might make perfect sense to you might not translate across to someone who doesn’t know what’s so important about “the ninth cloud.” You become so much more aware of every sound and the reasoning behind it, like why are there six ways to express exactly the same sound (hello my frustrating French lessons… #itjustdoesn’tmakesense)

Fear of Looking Like an Idiot Fades Away
Stepping into a new country and culture is much like being a newborn baby – you have a steep learning curve. The nice part? As soon as the locals realize you’re not from around here, they “get it” and are willing to help you take your first steps (for the most part that is.. sometimes you’re just left hanging wishing for a quick death instead). As a new expat, you’re expected to make mistakes. Why would you know the bus route? Why would you know how to fill out paperwork in an unfamiliar language? Why would you know it’s rude to cut your food that way? At home, there’s a certain level of expectancy, but abroad, a new level of acceptance and understanding quickly takes “feeling like an idiot” out of the equation – and makes you more understanding of others as well.

“Normal” Loses Its Meaning Altogether
When you first arrived in a new city, you gawked for hours at the amazing architecture, spend far longer than was socially acceptable savoring the weird food, and inspected the locals’ “strange habits” with a fascination comparable to a National Geographic narrator. Yet after a few weeks in your new environment, your mind had two options – roll with the punches or implode from the awesomeness of it. You realized that nothing is “normal,” because everything is normal – it’s just new to you. A weird show, a funny conversation, a bizarre behavior or a funny ad, a beautiful work of art and stunning landscape are still worth appreciating, but they’re not strange anymore, and assimilation becomes less of an action and more of a second nature.