I have a new Expat Focus editor, and before I embark on my monthly effusion I’d like to thank her predecessor Carole Hill for our happy collaboration. Enjoy your retirement, Carole.

The season of Christmas markets, concerts and Réveillon blowouts is upon us. I shan’t mention any of them this December, because my regulars have read it all before, and newcomers have only to click on . Instead I’d like to tell you what John and I have been up to lately.Here is my previous column about Christmas in the Morvan, from December 2014. 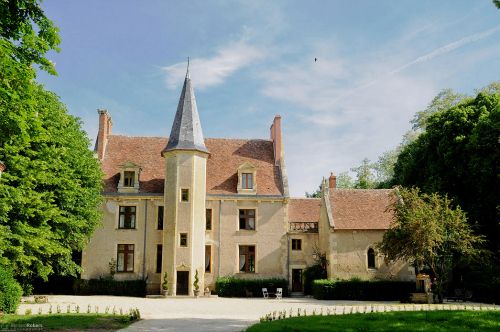 I enjoy cooking, and when I received an email from the Château le Sallay near Nevers offering bed and breakfast and cookery lessons with their chef de cuisine, I booked a two night stay in this former summer residence of the Dukes of Nevers and asked for choux pastry, French macaroons and tuiles, none of which I could tackle with any confidence. 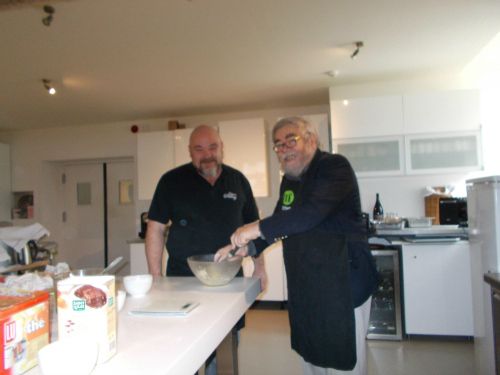 It was a privilege to work in their beautiful modern kitchen; even more so to see the ingredients of the evening meal – écrevisses on the first day, joue de boeuf on the second – while studying under the tutelage of chef Olivier. John, who had never done any cooking since Cook’s Badge in the Scouts, revealed an unsuspected talent for piping macaroons.

The euphoria evaporated when we came home to an email from Paul and Anna, who rent our house in Suffolk, complaining about matters of maintenance. I was reminded of the piece I wrote in May 2014 about the difficulties of becoming an absentee landlord.

We decided to keep The Limes, our old farmhouse in Eyke, Suffolk, at least temporarily. Firstly, we wanted to be able to return to Blighty if our move to the Morvan turned out to be a huge mistake. Then there was our affection for the house itself and for the village where we had lived since 1978, raised a family and played an active role in local life. In Suffolk, where so many communities have lost their shops and pubs, Eyke was and is exceptional: a storybook village with a thriving shop, a primary school serving several villages and feeding the local high school, a vibrant church, a convivial pub, a village hall and a playing field. Agatha Christie could have set a whodunnit there, and Joanna Trollope would find ample inspiration for an Aga saga.

I just hope he [the agent] finds a family who will appreciate our house and our village.

Well, he did, bless him: Paul, Anna, Alfie, doing well at the village school which did our own son proud long ago, three dogs, and now baby Charles Frederick. 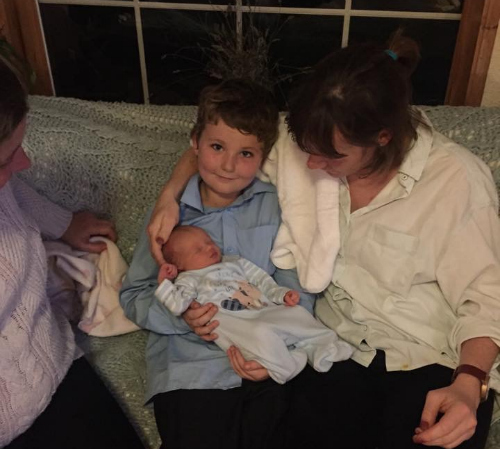 So far, so idyllic. Now, however, there were Maintenance Issues, starting with a blocked drain so noisome that the neighbours were complaining. The agent had not resolved the problems and Paul emailed me in evident frustration. A flurry of phone calls and emails followed, and I hope everything will be sorted very soon.

At times like this I wonder how other expats cope, and I hope some will share their experiences with me. Even the most conscientious and efficient agent is to some extent at the mercy of tradesmen who let clients down, which is what seems to have happened in this case. In my glory days I kept a list of reliable tradesmen who were sure of prompt payment for good service and who therefore provided same. Can all letting agents say the same? Suggestions, please.

And now for my annual Christmas story, Passing Off.

The leading character in Calendar Girls wins Best in Show with a cake from Marks and Spencer. A lawyer might describe this form of misrepresentation as passing off. That episode inspired the final section of this true story. 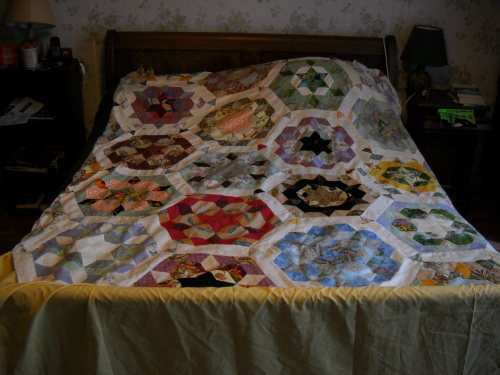 At Maré le Bas in 2011 Rosy Rabson embarked upon an ambitious patchwork project.There would be hexagonal blocks, each composed of diamond shapes formed into stars and boxes, linked with elongated rectangles and tiny triangles. As always, she would stitch by hand.

‘In 1955,’ she would say, ‘I was faced with an electric sewing machine in what was then known as Domestic Science. It ran away with me, I stitched my thumb, and ever since then I have preferred to sew by hand.’

And so Rosy took out a pair of diamond-shaped templates. With the smaller template she cut out hundreds of diamond shapes from scrap paper. Then it was time to choose the fabric. She selected plain white cotton for the rectangles which would link the blocks together. For the rest, she would plan each block individually. She chose a colour scheme for the first block, assembled her chosen fabrics and with the larger template cut out diamond shapes. Each fabric diamond had to be tacked to a paper diamond. To make a star, six diamonds were stitched together. A box required three diamonds.

Her fabric collection was impressive. Some had been donated by friends who did dressmaking. There were remnants spotted in jumble sales in Suffolk. And Rosy was not averse to cannibalising garments and bed linen of her own. Since arriving in France, she had picked up treasures from vide-greniers and swapped swatches and anecdotes with like-minded friends.

When the work was almost completed Rosy bought a yellow cotton sheet, still in its wrapping, at a vide-grenier, to back her patchwork. Her husband, John, took photographs.

Digression: You can read all about vide-greniers in Rosy’s piece here.

Then their friends Bob and Susan Brown came from England and stayed in Charity Cottage. One thing led to another and Rosy entrusted Susan with her patchwork and the yellow sheet. Susan would back it and bring it back to Maré on their next visit.

Shortly after arriving home, Susan had a sort-out and Bob obligingly ferried several boxes of oddments to the local charity shop. It was not until Rosy asked how the backing of her patchwork was progressing that Susan realised…it had gone to the charity shop along with the books and bedlinen, china and cutlery. Rosy accepted the loss philosophically. ‘This is not a major tragedy in the terms of the history of the world,’ she said. ‘Let’s hope someone bought my patchwork, finished backing it and enjoyed it.’

Hilary Hancock, pillar of the Women’s Institute and accomplished needlewoman, was browsing in her local charity shop (‘Every penny goes to the Hospice’) when a helper unpacked a box of oddments that had just been brought in. A few minutes later Hilary paid £5 for Rosy’s patchwork and took it home, her heart singing. She backed it and pressed it, and was about to spread it out in her guest bedroom when a thought struck her. Well, it did not so much strike her as whisper seductively in her ear. ‘WI County Show,’ it cooed. Hilary examined the quilt again. It had star quality. She pictured herself clutching the Jubilation Salver for Best in Show.

Anyone who has seen Calendar Girls will be able to picture the WI marquee at the County Show. The needlework section was a feast of colour. In pride of place was the patchwork quilt entered by Hilary Hancock. Pinned to it was a card: First Prize, and a typewritten report from the adjudicators. who praised the overall design, the choice of colour and above all the tiny stitches.

Hilary’s picture appeared in the local newspaper. The quilt was pinned to the wall behind her. Hilary, radiant and triumphant, held the Jubilation Salver. One of the national newspapers picked up the story. Hilary featured in their weekend supplement in full colour.

It was then that things started to come – er – unstitched. Kath and Walter Gill had visited the Rabsons when Rosy was planning her patchwork. Now Kath was leafing idly through the weekend supplement She saw the article praising Hilary’s patchwork and stopped short in astonishment.

While Walter Gill and John Rabson were exploring a defunct narrow-gauge railway, Rosy and Kath roughed out one of the blocks together. Kath’s choice incorporated scraps of John’s old red shirt, a Sanderson curtain and a pillow case from Trois Suisses. How had Hilary Hancock got hold of those?

Kath scanned the article and emailed it to Rosy, who laughed uproariously. She telephoned Kath and congratulated her on her discovery.

‘The wretched woman deserves to be exposed as a fraud,’ said Kath. ‘What are you going to do? The newspaper article says where she lives, and I expect you can get the full address online.’

‘There are so many interesting possibilities,’ said Rosy. ‘I could write to the newspaper with a picture of my patchwork and invite them to write a follow-up story. I could spill the beans to the National Federation of Women’s Institutes. Or maybe I’ll write to her and invite her to stay in Charity Cottage and donate to Combat Stress. She’ll get the message if I use John’s picture of the patchwork as my letterhead. Meanwhile I must call Susan and tell her the news.’