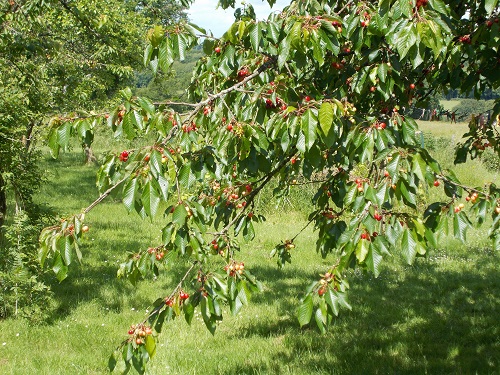 I am typing this on 30 May. Yesterday the checkout girl at Aldi (our favourite supermarket in Corbigny, where the staff are old friends) was too polite to comment on the three bottles of cognac in my basket. Not a drop passed our lips, however: I filled six big kilner jars with brandied cherries. Last year a late frost killed all the blossom. Now our big cherry tree is bent like a weeping willow and the Rabsons, their friends and neighbours compete with the birds for the succulent fruit.The Lakeland website, home of kitchen gadgetry, offers a recipe. Bizarrely, four packets of cinnamon sticks at Atac in Corbigny (Aldi don’t sell them) cost more than a bottle of brandy. Aldi has crème de cassis, Burgundy’s own alcoholic Ribena, at 4 euros a bottle. I might try botttling some cherries in crème de cassis before I get out my jam pan: the other cherry tree is laden too, and the fruit will be ripe in a week or so.

Kilner jars? Thereby hangs a tale. Georges Delcros spent his boyhood holidays in what is now Charity Cottage, and when he retired he and his wife Carmela bought the land and built their dream home. When they downsized and moved south, they left us their collection of kilner jars along with many other useful things. All I needed was new rubber seals for the jars and I was in business.

Yes, summer is coming into our garden, where I do my needlework and enjoy the birdsong and butterflies. The red squirrels are rearing their young and the birds sing all day. At dusk the bats come out from behind the shutters and flit about. It all brings to mind the song which was a big hit around 1260: Sumer is icumen in.

As part of my French degree course in the 1960s I dabbled in palaeography – handy in later years for deciphering handwriting – and fell in love with the oldest English song in existence. It was only a copy: the original is in the British Library. The Latin lyrics are banal, and frankly Keats could have done more with the subject material than starting bullocks and farting bucks, but the tune is catchy.

In the original Middle English manuscript,

the þ stands for th.

If you already knew that, congratulations. Meanwhile you can read all about it and listen to the music on Classic FM.

Rambling on the Farm 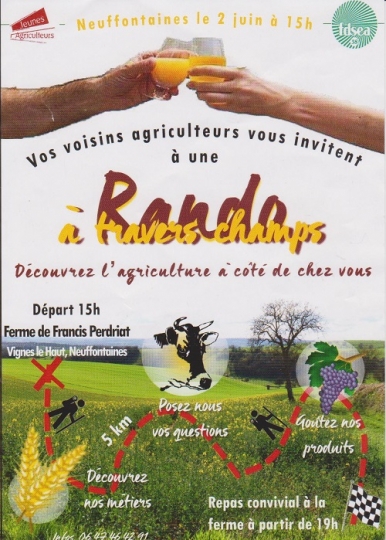 Une rando (short for randonnée) is a ramble, as opposed to a serious walk. June 2 is an important date for anyone interested in agriculture here in the Morvan. If I accept this invitation for a 5 km ramble through the fields, meeting the people and tasting the produce, I shall miss my deadline for this piece. I have spoken with Muriel, who is organising the event, and John and I have signed up for the 10 euro repas convivial in the evening.

Visitors always exclaim over the beautiful white Charolais cows and their calves in the field behind our house. Many local farmers shun AI, believing the bull does a better job himself. Our visitors also admire the orchards and vineyards and the crops in the fields. It is a pity Charity Cottage is unoccupied at present, as a visit to Francis Perdiat’s farm at Vignes le Haut would be as enthralling and educational as any tourist site. Well, we are expecting two honeymoon couples in July, one from Canada and the other from Wales. Both enjoy walking: maybe Muriel will invite them for a ramble.

For American Mothers’ Day the postman brought a gift from California: a large cardboard box containing chocolates, Yves Rocher toiletries and 20 roses. Our son had ordered through Interflora, who despatched my gift via a local florist. Sadly all the roses were fully open and several were already rotting. I sent an email to the address on the gift card, quoting the order number and attaching a picture of the roses.

Now for the frustration. ‘Edgar’ (such people never divulge their surnames) sent a form email asking for the order number, which I had already supplied. I obliged, adding my telephone number and a scan of the label on the box for good measure. No reply. I wrote again, with a picture of the roses which by then were in an even worse state. Still no response.

John emailed from his PC. Still no response. Eventually, after we had mentioned to our son how lovely the gift was apart from the dodgy roses, he received a grovelling apology from Interflora in French, and a promise of a refund. Nothing was copied to me or to John. Meanwhile I treated myself to a 3 euro 95 bouquet of roses from good old Aldi.

In my glory days when Angela Clark and I co-wrote a Pocket Lawyer title on consumer rights, (see here) I was able to resolve almost all my issues with a telephone call. John used to say, ‘Rosy is so relentlessly nice that she loves everyone into submission’. Usually I asked for a bouquet of flowers as a goodwill gesture, and almost everyone obliged. Happy days! Now, especially in France, contact with a human being is rare. Readers with a high boredom threshold may like to reread my February effusion.

I have said it before, and I’ll say it again, French consumer law stinks. Also the emphaisis on email does not help consumers to obtain satisfaction.