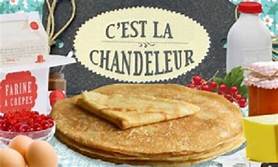 Around the middle of January our local shops are full of pancake paraphernalia: crêpe pans, electric crêpe makers and free crêpe recipes appearing in the supermarkets. A little early for Pancake Tuesday, surely? Well, yes: they are in fact gearing up for La Chandeleur, February 2.

Digression: I can never resist an excuse for a spot of research. In my student days research involved hours in the library paper-chasing through dog-eared index cards. It is a joy to be able to sit in my warm study and type ‘Crêpes history’ and sift through the dozens of references while playing online scrabble with my buddy Beardie in Yorkshire.Candlemas commemorates the purification of the Virgin Mary and the presentation of baby Jesus 40 days after His birth. Like Christmas, this is a pagan festival which was sanitised and adopted by the Christian church.

Lupercalia was a festival in honour of the god of fertility and shepherds – Pan to the Greeks, Lupercus to the Romans – with torchlight processions and streaking through the streets. Lupercalia was celebrated in mid-February and is also thought by many to have been the origin of St Valentine’s Day. Plutarch wrote:

"At this time many noble youths and magistrates run up and down through the city naked, for sport and laughter striking those they meet with shaggy thongs. And many women of rank also purposely get in their way, and like children at school present their hands to be struck, believing that the pregnant will thus be helped in delivery, and the barren to pregnancy."

It sounded such good fun, especially the nude magistrates, that I am not surprised that in 472 AD Pope Gelasius I moved Lupercalia to 2 February and renamed it the Purification of Mary. Later the flaming torches were replaced by church candles. Spoilsport!

Where do the pancakes come in? According to the france.fr website – and surely they should know – at the beginning of February, crêpes were distributed to pilgrims arriving in Rome. It was at this time of the year that the winter sowing season began. The extra flour was used to make crêpes, a symbol of prosperity for the year to come.

Tradition has it that you hold a gold coin in the hand that you write with and flip the pan with the other. If you catch the crêpe you are guaranteed prosperity in the coming year. Unlike some dodgy MPs, flipping is not my forte, but the thought of a prosperous year was a great incentive. And so, on February 2 2018 I clutched a euro in my right hand (louis d'or being unobtainable) and flipped my pancake with my left. It landed on the floor… owners of gluttonous dogs turn their crêpes with a spatula.

There are many crêpe recipes, but I favour the basic pancake recipe in my gravy-spattered copy of Delia Smith’s 1976 Frugal Food. (reissued in 2008). You can find the same recipe here.

In the French calendar every day is dedicated to a saint. My birthday commemorates St Léonce. February 14 is St Valentine’s Day. Like so many Christian festivals, St Valentine’s day has pagan origins: in this case Lupercalia. – see above.

Le Criquet, our monthly free magazine, is always full of ads for Valentine’s Day gifts and meals. John and I rarely succumb, but last year we reserved a table at Le Marode in Corbigny, where we enjoyed several meals while our new kitchen was being installed. Their Valentine dinner was a triumph at 35 euros a head including kir and champagne. They are doing it again this year, same place, same price. 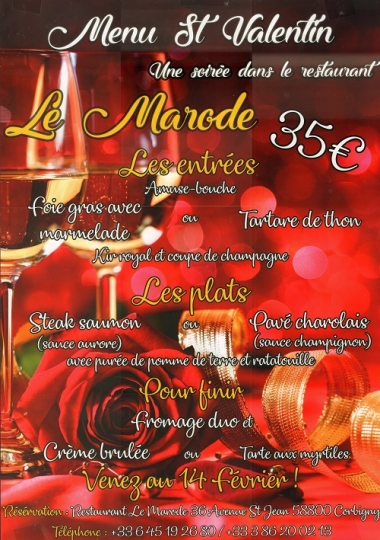 So let’s hear it for La Saint-Valentin. Why is St Valentines’ day La Saint Valentin in French? This puzzles a lot of students since “Saint Valentin” is masculine, therefore the article associated with it should be “le”. It’s a good question. However, what we mean here is “la fête de Saint Valentin”…fête is feminine, hence the “la”. Pedantry rules OK.

A cheerful website tells you more than you ever wanted to know about Saint Valentine (there are several candidates, all Christian martyrs) and also the village of Saint-Valentin in the Indre, not very far from us. It seems to be the only St-Valentin in France, although I came across one in Quebec.

During the St. Valentin Festival, the whole place is decked out with flowers… You can get married in the garden gazebo, pin your love notes on the Tree of Vows, plant a tree that will hopefully flourish or commemorate your love on the Tree of Eternal Hearts… Apart from getting married, you can get your letters stamped from the St. Valentin post office, watch chocolate makers in full heart depiction mode, buy postcards and special gifts, and of course, this being France, have a very good meal and whirl your partner around the dance floor. There’s also a market and a special church service.

Supposedly, Charles the Duke of Orleans sent the first modern Valentine’s Day card, along with poems and other love letters, to his wife from his cell in the Tower of London after being captured by the British at the Battle of Agincourt in 1415.

I found disappointingly few romantic cards in our local shops. My favourite is this one from the Amazon website: 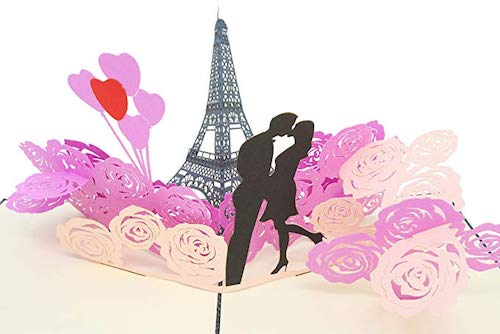 AB Services never acknowledged my email attaching the January Expat Focus effusion. They seem to hope we’ll lose interest and go away. The next question is whether to choose mediation or litigation. Both worry me because I know so little French law. I have not so far succeeded in finding a French investigative journalist. I recall Esther Rantzen – now a Dame – who presented That’s Life! for 21 years. She would have named and shamed AB Services, between denouncing a dodgy dishwasher and putting a talking dog through his paces.