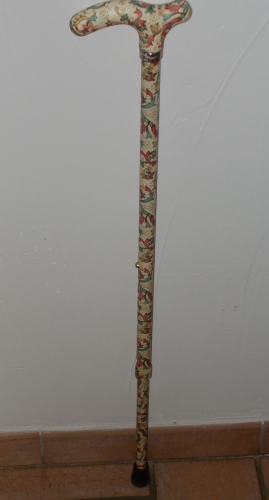 ‘Quelle canicule!’ everyone exclaimed: ‘What a scorcher!’ June was exceptionally hot and dry, and I took to recycling our bath water to wash the car and water the geraniums on the patio. Then, on June 27, just as we were driving home from Avallon (more of that trip anon), the heavens opened. Since then it has been blessedly cool, and the grass is green again.Avallon, almost an hour’s drive from Maré, has supermarkets, two excellent museums and a Chinese restaurant with an all-you-can-eat buffet. However, we were searching for a new electric oven. Spares were no longer available for our existing oven, which had a dodgy element and an unreliable thermostat. So John measured the housing and we drove to Conforama, which sells furniture, electrical appliances and IT supplies. A pleasant young man used a clever electronic gizmo to take the measurements of every oven in the shop. Just two would fit our housing, and one of them was a display model at a much reduced price. Anyone who knows me will guess which model I chose.

In our glory days we would have brought home our new oven then and there, but we paid 25 euros for delivery and installation. I look forward to baking a cake at the Pâtisserie setting rather than ‘Pizza maximum temperature’.

I am stiff in my joints nowadays, and weeding the flower beds on my knees is no longer an option. I took to keeping my late Dad’s walking stick in the car. Eventually I mentioned this to our family doctor, who asked if I would like une canne anglaise, a modern walking aid with an elbow support. Why English? I enquired. He did not know. Well, filer à l’anglaise is to take French leave… The pharmacy offered a bewildering choice of sticks. I chose an adjustable model with swirly patterns reminiscent of mediaeval manuscripts. It cost very little after the pharmacist had swiped my carte vitale.

A carte vitale is, according to my trusty Harraps, ‘a smart card on which information about a patient is recorded, used when making payments to a doctor or a chemist for purposes of reclaiming medical expenses’.

A visit to your GP costs 25 euros up front, then he swipes your carte vitale and most of the money is reimbursed automatically. There are of course arrangements for the poor and needy, but John and I both believe the 25 euro fee discourages ‘frivolous’ consultations.

When the proceeds of The Limes, our house in Suffolk, hit our bank account, John and I refrained from wild extravagances. However, we decided to give Charity Cottage a treat. With the help of our son Hugo, here on a visit from California, John installed wifi in the cottage. Previously anyone staying there had to bring their laptop onto our patio, as internet access in the cottage was so dodgy.

Then we decided to make the cottage habitable all the year round. People who have stayed there in winter (typically neighbours with more Christmas visitors than they can accommodate at home) needed several electric heaters and a ‘door sausage’ to combat the howling draughts from the ill-fitting french doors at the front. Additionally the key to the front door lock no longer functioned, so entrance was via the bedroom…

The cottage has an upper floor, accessible by an outside staircase. When we arrived there was a great deal of junk discarded by the prevous owners, who were downsizing. There was the occasional treasure among the trash, and for years I wombled successfully for garden tools. Now it was time to make the area decent, if not fully habitable because of the low ceilings. 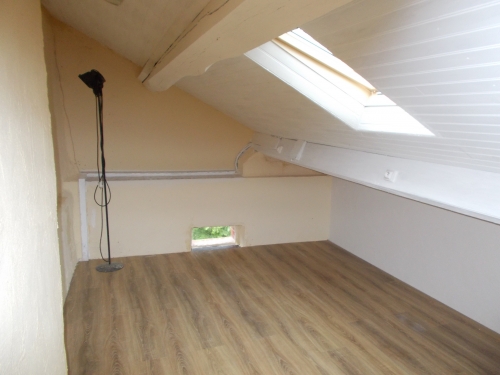 Then he fitted new PVC french doors at the front of the cottage to match the french windows Monsieur Charlot installed when we first converted the cottage. We commandeered half the adjoining woodshed to create a bedroom with a splendid French window (echoes of Gerard Hoffnung’s ‘There is a French widow in every room, affording delightful prospects’). 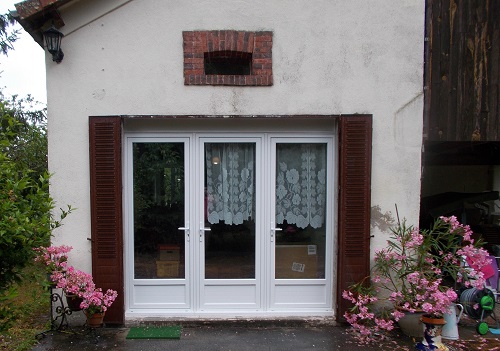 Bless him, our builder came when he said he would, did what he agreed to do, and stuck to his devis.

Un devis is a precise quote as opposed to a finger-in-the-wind estimate.

When we’ve got our breath back we’ll ask him to start on the main house: the beautiful oak exterior woodwork needs attention and I am wondering about a new kitchen to replace the 1970s avocado model we inherited when we moved in.

Thereby hangs a tale. Georges Delcros installed a wonderful electrically powered awning, extrerior lighting and an intercom between the gate and the main house. Then he ran out of money, and transferred the kitchen units from his old home. Formica-faced chipboard does not last forever, and some units have been repaired several times. Additionally, I am too short to use the highest shelves. John and I are researching kitchen units. Watch this space.