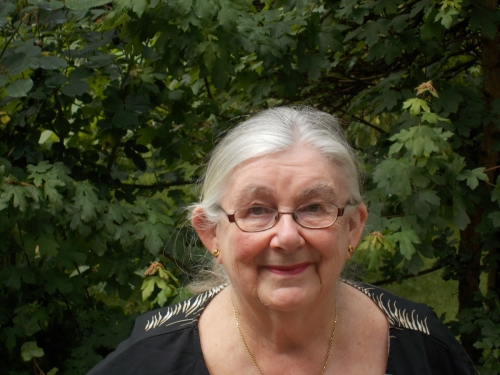 Charity Cottage, the holiday home we run in aid of Combat Stress, stood empty throughout May, June and July. We do not advertise in tourist guides because this could affect those whose livelihood depends on their gîtes. Well, several people made bookings, then either cancelled at short notice or simply failed to turn up. I doubt whether they would do this in respect of a commercial gîte. Eventually I insisted on a £50 cheque payable to Combat Stress as a non-returnable deposit, unless I knew the people.

August was a triumph. Even the weather obliged. After the prolonged canicule in June and July, we had several downpours and the parched grass was soon green again.Charity Cottage welcomed Jon and Kathy from England, who booked for two weeks. Kathy shares my passion for patchwork. I told her the tale of a quilt I stitched, which was entrusted to dear friends to be backed and was taken to their local charity shop by mistake. Well, few husbands know the difference between a future heirloom and a bundle of old bedlinen…Fortunately John had photographed the quilt for the archives, and I hope that whoever bought it gave generously to the hospice.

Well, Kathy came back from a vide-grenier with a small patchwork quilt in shades of blue, picked up for 10 euros. I was entranced. The quilt , laundered and stretched, now hangs on the wall of the bedroom in Charity Cottage.

On August 14 we attended the Voisinade, the summer shindig at Maré le Bas, not to be confused with Maré le Haut or Maré les Bois.

Digression: Un voisin/une voisine is a neighbour. Voisinade is absent from my dictionary, but check out voisinade online and you will see several accounts of jolly village shindigs, though not at MLB.

The MLB voisinade always takes place on a Friday evening in summer. The Morvan’s relative proximity to Paris (three hours on a good day) makes it a popular place to buy weekend homes, and the MLB weekenders make a point of attending the voisinade for rosé-pamplemousse and socialising. Rosé-pamplemousse mixes rosé wine with grapefruit juice. The Web gives the recipe but no indication of the origin.

This year we borrowed M Martin’s barn. As always, there was a bewildering choice of good things to eat, from quiches to crudités, from cakes to canapés. As we were celebrating 10 glorious years in the Morvan (more about that below) I added a whole dressed salmon to my usual curry puffs. Opportunists brought three hungry kids and a packet of crisps and showoffs contributed trays of exquisite amuse-gueules of the foie gras and quail egg persuasion.

Digression: In France un canapé is a sofa pure and simple; a pre-prandial nibble is an amuse-gueule. 'Refined' people say amuse-bouches; une gueule is a gob…

The following weekend Steve and Julie arrived for a return visit. On 29 August we celebrated the 10th anniversary of our arrival in the Morvan with a barbecue, with Steve as Official Chef. I bought a proper toque online.

Among the guests were our postman, Patrick, who has delivered our mail for 10 years, and his wife, Monique, Scrabble buddy Claudine (10 years of wordplay and chat), cleaning lady Yvonne (inherited when we bought the house), various neighbours and – oh joy! four very old friends from further north. Robert, our only Brit, handed out drinks and contributed a huge tray of amuse-gueules.

Well, the sun shone, a riotous time was had by all, and I have pictures on my PC to prove it. I now acknowledge, however, that I am no longer 35, as our son Hugo in California (and in frequent contact by email and Skype) occasionally reminds me. Shopping, cooking, assembling the barbecue ingredients, not to mention doing the flowers and preparing the guest suite for our visitors from afar, are things I took in my stride until recently. This time I was gratified rather than offended when several friends insisted on helping to clear away after the feast.

The village bakery created a wonderful cake with ‘Rosy & John, 10 Années Glorieuses’ to enjoy with Crémant de Bourgogne, the local answer to champagne.

Our four friends from far afield stayed overnight, Julie and Steve joined us and we were 8 at table next day to continue the celebrations in our favourite restaurant, Perreau in Lormes, which has done us proud for 10 years. It seemed appropriate to take along what remained of The Cake to share with our friends there.

I make no apology for the very personal content of this month’s effusion. It will be a long time before we have an excuse to stage another shindig. Steve and Julie presented us with a garden shrub. At the time we did not know its name (for the record it is a Veronica), so Steve christened it Shindig and crafted a sign with the date of the party. He planted it in our abreuvoir (stone horse trough) where we can admire it.

The Rabsons are taking bookings for autumn 2015.