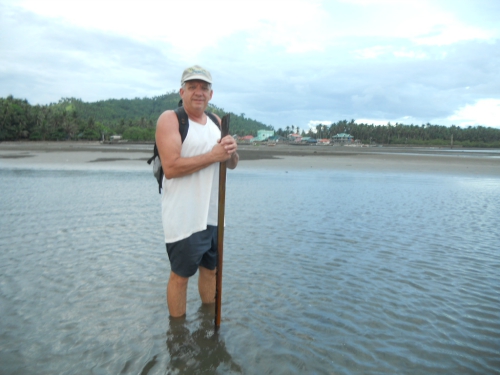 My name is Randy and I was born and raised in Illinios but, our family roots have long since been transplanted in Texas. I spent over 20 years with the U.S. Navy, some time thereafter with the National Weather Service, and eventually wound up my second career as a real estate broker. My wife and I lived and worked our last 20 years while residing in Tupelo, Mississippi. I retired to the Philiippines at the age of 58.Where, when and why did you move abroad?

We settled in Western Samar, the home of my wife’s relatives. Because of the economic climate in the U.S. at the time, we made the decision to close our two businesses, sell the house and our vehicles, liquidate all the stuff we didn’t want, and moved to the Philippines in July of 2013.

The biggest challenge was detaching ourselves from all the “stuff” we had accumulated in the last 30 years. We eventually decided to keep our furniture and all sentimental things, and liquidate everything else. That which we kept we shipped to our new home in two containers. One other challenge was bringing our two loving pets and the documentation process that was required. Travelling half way around the world with two felines is not an easy chore but, it was worth it in the end. One thing we managed to accomplish before we made our move was to get a good start on building a home here. We purchased property here several years before and over time, did our construction in managed stages. Once we arrived, all we had to do was finish up in time for our household goods shipment. 6 weeks after arriving, we moved in.

Yes, there are expats from the US, UK, Australia, along with some from several European locations.

Although we did choose to settle here because of family, Samar turned out to be a good choice. It’s provincial, with a slower pace of life, lower cost of living, no traffic issues, little crime, and very friendly people. We have a nice home on a large lot with all the amenities possible (especially air conditioning). Samar also offers uncrowded beaches and an abundance of natural beauty you will not find on some other islands or in the larger metropolitan areas. Now that we have arrived, a new mall and major grocery chain is building here.

Generally speaking, life is good. Communicating can be a real challenge as English is not widely spoken among the majority crowd here. Sanitation and environmental neglect is always a concern that requires turing a blind eye to most times. Overall, my biggest issue here are the inconveniences brought on by untimely power interruptions and the generally poor internet service.

The biggest difference has to be food variety. My menu liking is quite expansive so I don’t have a big problem with food choices, but I’d be remiss if I didn’t say I miss a good steak, pizza, cheeseburger, or some good Mexican food at times. My wife has learned to do very well with the availabiliity of ingredients and has learned to do some hybrid cooking.

One of the more obvious differences here is the loss of space and privacy as families tend to live in much smaller houses and under more cramped conditions. This leads to an under appreciation of overall privacy issues with the population (they do not understand the concept of privacy). Living in a non-secular and predominately christian society has its advantages also as everybody seems to be living on the same wavelength, much unlike where we came from.

Simply, I will say this. Know what you want, where you want to go, and what you are jumping into. Take your time, and never get in a big hurry to get where you are going. If you have never lived or visited extensively to the area where you plan to settle, then “Research” and “Plan” should be the two most prevalent words in your vocabulary. And if you have never been there, visit often before you make the move. Also, anybody moving to the Philippines should be aware that they will be hard pressed to make a living here so arriving with an established income is real necessity. Did I mention having a plan? My Blog documents much of our personal planning, decision making, and the actual moving process that we encountered in making our move abroad.

Aside from relaxing, maintaining good health and growing older, our plans include some international travel and definitely some local island hopping to visit with other friends and relatives scattered about. I may be Retired in Samar, but that doesn’t mean I buried my bucket list.

Keep up to date with Randy's adventures on his blog, Retired In Samar.