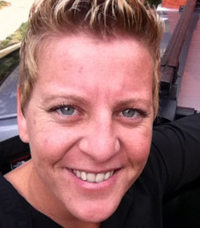 My path crossed with Corey’s when he contacted me about an author interview for my recent release, Becoming an Expat: Costa Rica. The more I found out about Corey Coates the more I wanted to hear his story, and so it goes…

“I like the interaction between the brain and the machine, I’m an audio learner”~ Corey Coates

Corey is from a small town outside of Toronto with just 5,500 neighbors. Music has been key throughout his life. He rocked out for most of his 20s as a professional musician, then transitioned into teaching guitar, working in a recording studio, and finally entered the world of radio editing. Seems like he found an excellent niche!Coates is present day director of Overseas Radio, and recently launched, Podfly (a podcast production company). He has lived in Costa Rica for the last eight years, which is why he is the talk show host for podcast, This Week in Costa Rica! Although, originally from Canada, Costa Rica was the change that was a long time coming.

“In Canada, everything was spelled out for me, it was easy to envision the next 40 years of my life, and it scared me.” ~ Corey Coates

After Coates turned thirty he realized he really hadn’t challenged himself much, nor had he explored the world. He felt stagnant, and decided it was time for a change, a gap year, if you will. Corey chatted with a few friends who were also looking for a change and together they completed the language course. They didn’t initially know which country they wanted to move to, it was whittled down to Costa Rica and South Korea. The two couples went out for Korean food and hated it! It was settled, Costa Rica was their place!

“I spent the first month without an internet connection, no phone, zero Spanish ability, challenging myself on every level, personal and professionally.” ~ Corey Coates

After walking the streets and many interviews Corey selected work with the company he thought had the most potential for growth, and grow he did! Within three years, he was their operations director for four schools in two countries!

“I always enjoyed the teaching more than the administrative work. No matter how the end of the day goes, you can always close the door in a classroom and have a real human experience.” ~ Corey Coates

He was able to mobilize his income by adding a skill, a TESOL certification, and hone his podcasting and radio editing skill-set. He has capitalized on two very different professions that he enjoyed in order to create an international lifestyle.

Overseas Radio Network contacted Corey in his sixth year working for the Costa Rican language school. They wanted him to put together a podcast for expats living in Costa Rica. It was a huge hit. Soon, they asked Coates if he was interested in becoming the program director. They planned to move the international company to Costa Rica!

Now that we’ve made it full circle, you may wonder what was the hardest part for Corey to make the leap abroad?

“Fear. Not speaking the language, not having a job lined up, only knowing what I could read in a book about the culture, not having a safety net, being away from family, entering a profession with zero experience, yes, I’d say fear.” ~ Corey Coates

Before every happy ending are trials, Coates was no exception. There was a six month period when the ceiling came in on him. He learned his wife didn’t love him and wanted a divorce, he lost his job with the language company and had no idea what he should do. He thought, “I could go home with my tail between my legs, or stay and start all over. So I stayed.” He was rewarded. Now his average day is balanced and healthy. It includes: yoga, meditation, Costa Rican coffee, writing, work, exercise, enjoying Costa Rican produce, swimming, strolling along the beach, and spending time with friends. Not a bad way to pass a day.

To find out how you can join Corey in Costa Rica read Becoming an Expat: Costa Rica, your guide to a Costa Rican life.