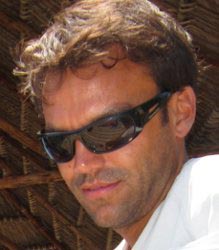 It could have been anywhere – it just happened to be in Mexico. Despite loads of bad press, the vast majority of people here are good, hardworking, decent folks. But the exceptions can be exceptionally bad.

The Hidalgo market is a crumbling structure about twice the size of a high school gymnasium. It sits on the slopes below the Terresona, Toluca’s mountain backdrop. My friend and I flew down one of its steep streets after a morning of rugged mountain biking deeper in the mountains. I realized we were going to pass the market, so I hollered at Marco to stop. I needed some new headphones.

Hidalgo isn’t just a market, but a fayuca, a place for stolen or knock-off goods. But down the corridor from all the bootleg DVDs is a regular market, full of food, especially fruits and vegetables.“While we’re here, let’s get some juices,” I said. All over Mexico you can get big one-liter Styrofoam cups of any juice mixture, always fresh. The cheapest and best are in markets.

I sat on the concrete platform by the front entrance, keeping an eye on the bikes while Marco went in for the juices. On the grass out front stood on old indigenous couple, the woman in a dress with a red and white checkered smock, the man with jeans and a cowboy hat. On the ground before them were four clear plastic bags of potatoes.

Sitting there worn out from the bike ride, I imagined it all – the little shack and patch of land somewhere up in the mountains. Digging, cleaning, and bagging the potatoes. The long bumpy bus ride that would cost them at least 36 pesos. Each bag was probably worth 10 or 15. Why did they come? To buy some medicine? Another product not available in their pueblito? Or did they have someone to visit here in the big city?

The juice was taking a long time. I had asked for alfalfa, which is ground up with pineapple, guava, and other things I have no idea what to call in English. Maybe Marco was chatting up the juice girl.

Four young guys with slicked back hair and new clothes – white collared shirts and fashionably frayed jeans – hustled toward the market from the street. I put my feet up on the bikes.

They came up behind the old couple, surrounding them, and each one snatched a bag of potatoes. Then they rushed back to the street and jumped in the bed of a rusty white pickup, which sped right away.

The old couple looked at each other and at their empty sheet on the grass. Just then Marco came up with the juices. I explained what I’d just seen.

“Do you have any change?” I asked. He had a 50-peso note, worth about four dollars. I asked him to give it to them. They thanked him, looking as if they were in shock. Right after Marco, a girl came out of the market and handed them another 50. So they ended up with more money than they would have gotten for the potatoes.

Marco and I tried to figure it out. Maybe the markets pay these guys to shake down people selling outside because they are competition for the fruit and vegetable stands inside. Maybe they were the potato syndicate. Mexico operates like New York in the days of the mafia – everyone has to pay someone off.

If they were the potato syndicate, it’s still an outrage, although I can understand it on a weird level. But you’d think that they would just ask the old couple to leave, not steal their potatoes.

If they weren’t the potato syndicate, if they were simple thieves, well then that’s not quite so understandable.