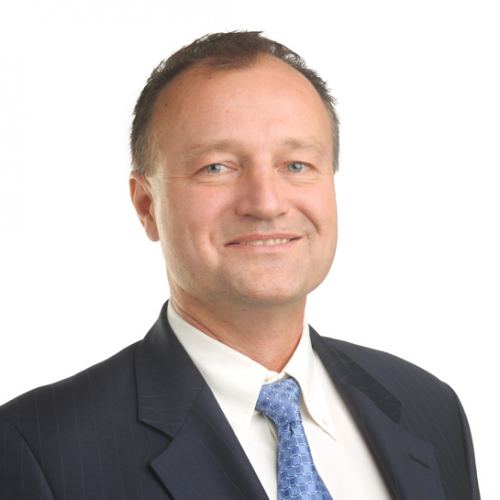 The Coronavirus pandemic has thrown all predictions out the window and analysts and portfolio managers are focusing on trying to understand the economic fallout from what has essentially been a global shutdown of industry – an event unprecedented in modern times.China has re-opened for business and the situation seems to be improving in many parts of Europe, with Germany most recently also re-opening in a limited way. In the United States we are at the tail end of the spread of COVID-19 in the developed world and are probably just in the middle of its effects, although even here we have seen signs that the trajectory of the virus’ effects is getting better in a number of places and recently several States removed stay-at-home orders. 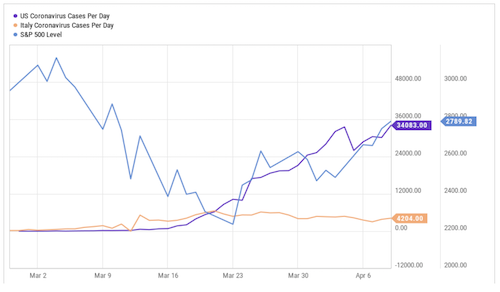 As can be seen from the above chart, investment markets hit bottom March 23rd and have rebounded since then. I did expect an upturn once it became apparent that things were substantially better in China and improving in Europe but the length of this rebound in markets quite frankly surprised me because it came at a time when things were just starting to get bad in the USA with respect to the virus. What I thought would happen is that we would get a further downturn, perhaps down to the previously hit bottom, when things got worse in the USA – and this I thought would present a buying opportunity. So far at least this hasn’t materialized, we have not as yet seen the second downturn I expected.

As the chart above shows, we hit the market bottom right around the time the trajectory of the virus, in terms of cases per day, started to improve in Europe. Then we had a rebound and it looked like there was going to be another downturn at the beginning of April just as things were getting worse in the USA. I was thinking this second downturn would be more severe, perhaps taking us to the bottom we reached a week previously; however, the markets turned around and proceeded higher even as the virus continued to get worse in the USA. It is just in the last few days that there are signs that perhaps the trajectory in some places in the USA has gotten better, and this is where I expected the market to bottom out at least temporarily depending on how bad the economic fallout turns out to be.

It is difficult to time the market and so not surprising to not get it exactly right. Even though markets have bounced back substantially, does that mean that the pain for investors is over? I think it is difficult to take that view because beyond the immediate COVID-19 effects on the market, perhaps even more difficult to gauge are the longer-term effects. There will almost certainly be a recession (defined as two quarters or more of negative economic growth) – but how big a recession will it be? Have a look at the two bottom charts in this Bloomberg article.

The second from last chart shows how long recessions have lasted going back to 1960. As you can see, most last about half a year, 2 quarters (peak to trough in the chart). The “Great Recession” of 2008 lasted just over 18 months and it took 2 years to recover to the economic highpoint reached previously. The unemployment rate is one key element of a recession, which is the last chart in the Bloomberg article. Normally the unemployment rate increases as the recession progresses and gets to its worst point at the trough of the recession, which makes sense since when employers stop laying off and start hiring again that would be a sign that a recession is over.

This time is different though. The world has stopped very suddenly and so we will not get the gradual decrease in unemployment that we usually get, and economic output has fallen off a cliff rather than slowly decreasing. Using previous economic models is likely not going to be very useful here because another element is the vast financial support being offered to the unemployed and to businesses during this Coronavirus pandemic – so while many people have lost their jobs, at least temporarily, they haven’t necessarily lost all their income and there are incentives in place in many countries to rehire workers once things return to normal.

When this first hit, I thought the effects of the pandemic would be relatively quick to reverse, that people would want to get back to work and normal life as soon as they could. However, I can’t help but think that while the effects of the virus itself will likely pass relatively quickly, within weeks if what we have seen so far holds up, the stigma of the pandemic and fear of a resurgence may be with us for some time. Will people book cruises and vacations again right away? Will we start going out to restaurants and mingling the way we used to as soon as the bans on social distancing are lifted?

I think there will be some trepidation and perhaps even permanent or at least long-lasting changes in human behavior. Reports from China show that people have gotten back to work quickly although with some modifications such as health testing through aps and social distancing at factories. However, non-essential activities like going to the gym, dining out, piano lessons, and so on, as well as activities that can be delivered remotely, like schooling for example, have not gotten back to where they were before.

With this in mind, I think we need to treat this recent bounce-back in investment markets with caution. This upward market move is a result of the recent good news that there is light at the end of the tunnel for the pandemic and to the massive government stimulus. It seems unlikely that investment markets should regain their highs just on the basis of this good news when we still have the economic fallout to deal with, which will take some time.

It also seems clear that this pandemic and the aftermath will affect companies and industries differently. It looks like tourism and non-essential services will be slower to recover but perhaps the severe market reaction in the banking sector and certain other industries has been overdone – it doesn’t seem like this will be a financial crisis like the one we had in 2008. Some industries and companies are in fact benefitting, and perhaps in a permanent manner. I imagine a lot of people have discovered Netflix, computer games, and online shopping over the last few weeks even more so than before. Makers of in-home gym equipment have probably benefitted and once people buy such equipment perhaps they might get rid of expensive gym memberships permanently.

Some investment opportunities appear only at times of panic and only very fleetingly. As an example, have a look at the chart below, which is for the preferred shares of a company called Annaly, which is a company that deals in mortgage loans. Preferred shares usually trade around what is called “par value”, which in this case is $25/share. At that price, these preferreds pay a dividend of 7.5%, which is pretty good already. However, if we can buy them at $16/share then the dividend yield is almost 12%. The problem is that price may hold for maybe a day or even just for several hours so it is easy to miss.

There are other such opportunities around but the question is always whether we buy now or whether things could get cheaper and therefore we should wait. For the time being I think it is wise to avoid the broad market investments and pick and choose individual companies and investments that seem to make sense given the circumstances – and try to take advantage of panic behavior.

The question then arises as to when things will get back to normal and when it will make sense to once again invest in broad markets and in shares of the most affected industries. Perhaps once a vaccine is created that may be the turning point, which could happen within a few months. Until that happens, I think it unlikely that markets will regain their previous highs, certainly we will have at least a couple of quarters where many corporate results will be negatively affected and outlooks will be difficult to make. At the same time there has been a large market correction already, and so perhaps the most likely scenario is that we will see a sideways market reaction for a period of some months.

Contact Tom for a free, no-obligation discussion of your financial situation if you are a US citizen living abroad or a foreign national living in the USA.

Articles are for informational purposes only; they are not intended to offer advice or guidance on legal, tax, or investment matters. Such advice can be given only with full understanding of a person’s specific situation.