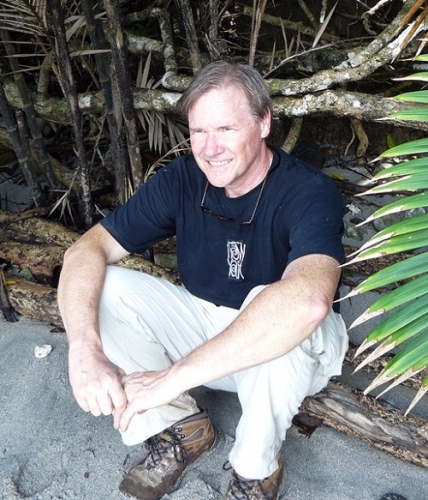 I’m Casey Bahr, a retired software engineer who moved to Costa Rica with his wife and younger son. I am the author of a Costa Rica-centric blog, A Dull Roar (and 3 other blogs), and I perform part-time copywriting for extra cash. My wife is an accomplished architect and artist in several media including watercolors, ceramic mosaics and jewelry.I recently wrote a how-to book on copywriting.

Another activity is my “kitchen-table” charity Costa Rica PC Rescue that restores discarded PCs and gets them to the poorer Costa Rica families that have never owned a computer. So far, we have donated about 63 PCs to these families.

After on-the-ground research, my wife and I selected Costa Rica’s Southern Zone and purchased bare land northwest of the largest city in this area, San Isidro de El General. We bought our land in 2007 and relocated about a year later. We were chasing a dream of country living, a milder climate and the chance to design and build our dream home. We also wanted to give our son, who was 10 when we moved, the chance to experience another culture and learn a second language.

Dealing with all the “stuff” one collects over decades of normal suburban life in the U.S. was not easy. We managed to get the remainder into a 30-foot trailer, but if we had to do it again we’d probably take far less down.

The first couple of years were the most challenging:

– We had to learn Spanish (mine was OK, but no one else spoke it)
– We seemed to constantly be battling with the strange, new bureaucracy, which often appeared to have no rhyme or reason
– We had the normal stresses of building a home while living in nearby temporary rental
– Although we were in awe of the astounding natural beauty around us, we also had to learn to deal with a whole new set of plant and animal pests

There are actually a lot of expats here in La Zona Sur but we are all rather spread out. Many have been here for decades but there are new arrivals every year. They skew towards retirement age, but there are many younger people too. We have made dozens of new local friends since moving here.

The climate where we live at 4000 feet is about as ideal as one could hope for. Temperatures average between 68 and 78F throughout most of the year, rising a bit in the Costa Rica summer months from Jan to April.

We really enjoy our Tico neighbors and the many Tico friends we’ve made. They are very friendly and helpful. We enjoy the much less regulated life here, the ability to grow food all year and the good cheap medical care. We spend about 25% less than we would living in the States and have a stupendous view we could never afford there.

We love being less than an hour from uncrowded (often deserted!) pristine tropical beaches with warm water all year around. We equally love being able to visit the cool (sometime cold) mountains where we can fish for trout.

The Costa Rica roads. There are far more unpaved roads than paved ones outside of the Central Valley and they deteriorate badly before they are repaired. They take a toll on your vehicles.

When it’s summer in the U.S., we might complain about only having 12-hour days here, but of course that’s reversed when it’s U.S. wintertime.

We miss the big box hardware store (there is EPA here, which is like Home Depot, but only in San José), the garage sales and the discount clothing stores in the U.S. We also miss fresh blueberries!

The most positive cultural differences in Costa Rica are the much more laid-back lifestyle and the laissez-faire regulatory environment. We really do not miss the ever-present 24/7 marketing pressure so prevalent in the U.S.

A negative cultural aspect is that much of Costa Rica still does things in old-fashioned, less efficient ways. There are a lot of things done here that create paper trails that we did away with 20 years ago in the States. And, many things just simply take longer to get done here. That is just part of what you get used to and even come to appreciate.

Rent and live in several areas before buying property (if that’s in your plan). We didn’t and it worked out great, but in hindsight we can see where things could have gone wrong.

Expect your adjustment period to measure in years, not months. You will certainly have moments when you feel that you have made a huge mistake, but these moments will become fewer and dissipate over time. The path to expat life is certainly not a straight (or even continuous) line.

Learn the local language. Even though a lot of Ticos speak English and their number is increasing, the expat experience is a lot more fun when you can linguistically engage your neighbors.

Right now, we are in a holding pattern while our son finishes high school here and we send him off to university after that.

However, we are (half-heartedly) trying to sell our small farm in order to be in a better cash position, afford more travel and help out our kids.

We are actually even considering another relocation to perhaps South America or Eastern Europe. I guess once you get the expat bug, it stays with you!

Even if none of that comes to fruition, it’s hard to imagine a better place than southern Costa Rica to end up spending the rest of our lives.

You can keep up to date with Casey's adventures on his blog, and you can find his book about copywriting on Amazon.