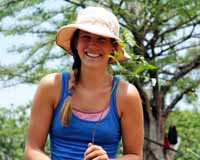 I am a woman in my mid-twenties from Minnesota, United States. I went to undergraduate in Arizona and gained a BA in Social Psychology. I then went on to earn my MA in Social Entrepreneurship from a university in California. I enjoy writing and reading, especially novels about utopian/dystopian and conflicting ideals. I enjoy living near the ocean, as I grew up in the Midwest and could only visit the ocean on vacations. I also love trees, as I believe they possess a knowledge and patience beyond what humans have been able to appreciate and comprehend. I enjoy traveling and feeling the energy of the morning in a new place.Where, when and why did you move abroad?

I decided to move abroad when I was studying Social Entrepreneurship for my MA degree in California. The focus of Social Entrepreneurship is to create sustainable business models that work towards a triple bottom line- effectively helping people solve world problems. I wanted to see some of the “third-world” dynamics firsthand, so I decided to move to Costa Rica. The country has had great growth recently, and the residents have benefited greatly. I wanted to take in firsthand the experience of living in a country that was considered “third-world”, but was now growing into a new market as they gained resources.

Deciding to move to Costa Rica was a challenge, as I had never before lived outside of the United States. As a young woman traveling alone, I was enraptured but nervous about the move. I sold a large amount of my belongings, and settled for storing the rest with family in the US. The main challenge I experienced during the move was just maintaining the feeling of courageousness every day. It was important to recognize the situation for what I would (hopefully) gain, rather than the fears that struck me every once in a while. Once the decision was made, I just kept pushing myself to make the next move.

I believe the best way to find a place to live in Costa Rica, or a similar country, is to be there. This is tough because it goes against common sense of wanting to know exactly where you are heading. However, not many people are advertising their smaller rentals on the Internet at this time, so it really is best to get into the area and start making connections with people. Find a hotel or hostel where you can afford to stay for an extended period of time until you are able to find a place of your own. This is also the best route because it allows you to see the place in person and feel comfortable with the amount you will be paying.

Where I lived in the Orosi Valley, there were a handful expats who were living there either permanently or for an extended period of time. It was nice to be able to connect with them when I went into the local city of Paraiso to shop at the bakery or have coffee. But, to be more involved in the expat lifestyle, I would need to venture just a bit further to the city of Cartago. The area I lived in was located in a valley, with various small towns scattered throughout. In these towns, I would often see foreign travelers making their way through the local sites, and usually staying over for a few nights to a week at a time.

Costa Rica is a very friendly place, and nearly all of my interactions with the locals were extremely pleasant. I enjoyed their company greatly as I acclimated to living in a new area. The locals were always very helpful when I was looking for a specific product at the local farmacia, or shopping at the local supermarket. These people came to know me as a familiar face in their town. I became friends with a few of the locals, and enjoyed dinners with friends and was welcomed to their homes and truly felt like both a guest and a friend.

What I loved most about where I lived in the Orosi Valley was the incredibly gorgeous scenery. Living high up on the side of the valley provided expansive views of neighboring towns, coffee farms, and of the historic ruins of the oldest church in Costa Rica, Ujarras. The area is relatively undeveloped according to western standards, and the towns were small and untouched by commercialization. The Orosi Valley allowed me to live among the trees and clouds, waking up to the sounds of a magnificent waterfall and wildlife. I enjoy that the town of Paraiso is within walking distance (about 40 minutes, but pleasant). It was also convenient that public transportation on the buses could transport me to Paraiso or Cartago easily.

There is not much I disliked about expat life, aside from being away from friends and family in the United States. It was a bit of an adjustment to get used to the differences in culture, although I came to realize that things in Costa Rica were not much different at all, albeit a bit more relaxed and serene. I did not have a car, and I did at times miss the convenience of living in a large city like Los Angeles. However, it only took an hour’s ride by bus into San Jose to really feel like I was in a city again- looking at the same fast food chains I would see on any corner in the United States.

I would say if you have a desire to live in Costa Rica- go for it! Don’t let any fears stand in your way. If you have the means to travel and live in this country, you will learn things about the world and experience a culture that is warm, welcoming, and has a true feeling of pura vida. The mountains of the Orosi Valley is one of the most beautiful place to gain quiet, while still positioning yourself close enough to some action. If you’re not ready to make the move, I suggest visiting for an extended period, and I’m sure the place will envelope your heart and make you want to come back in due time.

After living in Costa Rica, I moved one country north to Nicaragua. I wanted again to expand my knowledge and ideas about living in a particular country, and was eager to be able to compare life in the two countries- but I’ve found that they are nearly impossible to compare. Costa Rica has truly positioned itself as a growing and moving economy. They have taken on tourism without yet losing too much of their cultural identity. There is open space and freedom to roam, yet amenities that are necessary for living. I plan to live in Costa Rica again, and would love to spend more time traveling near the beach. I think the next place I will spend time is Santa Teresa in the spring.