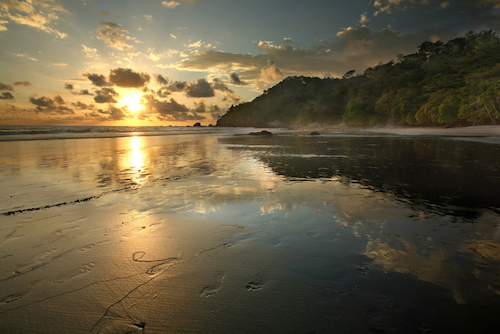 If you’re concerned about the environment, are interested in the ecology and are thinking about moving to a country which has a commitment to sustainability, then it’s likely that Costa Rica will be one of your first choices. It’s a fascinating place in its own right; one of the go-to countries for studying nature conservation and high-altitude cloud forests, Costa Rica has an ethos of ecotourism which is genuinely established and does its best to avoid ‘greenwashing.’ Despite having a tiny 0.035 of the world’s landmass, the country contains 5% of its biodiversity, meaning that the mangrove forests, volcanoes, rainforests and beaches of Costa Rica are like a microcosm of our planet. Both public and private initiatives in the nation lead the way towards increased sustainabilityThe Costa Rican government has pioneered PES (payments for environmental services) to encourage landowners to maintain beneficial environmental services, such as water management. Concerned that poorer members of the community were being left behind, a parallel funding stream was established by the NGO Fundecor, in which small-scale farmers who protect forests earn carbon credits. They can then sell these credits on to national industries to enable them to offset their greenhouse gas emissions.

“PES supports projects that bring long-term benefits for all – such as small cocoa enterprises for women, furniture workshops, and scholarships for doctors and nurses. The nation is also leading the way in ecotourism, defined by the International Ecotourism Society as: “responsible travel to natural areas that conserves the environment and improves the well-being of local people.”

This has been described by ecotourism researcher Kimberly A. Kleszczynski as going ‘hand in hand’ with sustainability. The scheme’s Certificate of Sustainable Tourism has been adopted by the UN as a model for possible roll-out in other nations.

“The Certification for Sustainable Tourism (CST) is one of the first systems… to achieve the integration of the principle elements of sustainable tourism, analyzing good management practices, the environmental and social impacts of services, as well as the client's perception of image and the congruence between the service offered and the product's promotion.”

The CST itself encourages businesses to participate in sustainable practices by awarding credit and compensation. Introduced in 1997, the CST covers hotels, restaurants, tour companies and car hire companies among others.

“Businesses that hold five level markers (leaves) in the CST program are carbon neutral, integrate authentic, locally made products into its offerings, give back to Costa Rica’s rural community and more.”

However, the Costa Rican government is not just concerned with the ecotourist market. It’s also committed to reducing the use of single-use plastics, is aiming to be carbon neutral by 2021, has reduced deforestation and has doubled its forest cover from 26% to 54% over the past three decades. In 2017, the government announced its strategy for replacing plastics with water-soluble and renewable alternatives. In 2017, Costa Rica attained a new record in clean energy generation and was awarded their latest Biosphere Reserve declaration by UNESCO. Some 99% of the country’s electricity now comes from renewable sources such as geothermal, wind or hydro-electric methods.

This is all the more impressive when we consider that the country is not among the wealthiest nations. It has relied in part on aid from the USA, receiving more than $1.6 billion in US assistance since the 1940s. The country ‘graduated’ from USAID in 1996 but still falls under the United States’ Strategy for Central America and the Costa Rica USA Foundation (CRUSA). However, some of the environmental funding also comes from an increase in taxes and initiatives such as ‘green’ bank cards, by which users accumulate points and the bank then donates a percentage of funds to biodiversity.

Funding also comes from the Sustainable Biodiversity Fund (FBS), a trust fund created by the Environmental Bank Foundation (Fundación Banco Ambiental; FUNBAM), which was created in 2008 to administer funds under the Ecomarkets II programme; funds which were in addition to those that Costa Rica might receive in the future. FUNBAM consists of representatives from relevant ministries, forestry financing, and conservation area management. The goal of the FBS is to conserve biodiversity in private property by: “guaranteeing independent long-term financing for Costa Rica’s Payments for Ecosystem Services Programme (PPSA) in the buffer zones around protected areas and in biodiversity corridors”.

The Global Environmental Fund (GEF) provided an initial seed capital of US$7.5m and aims to match contributions up to US$15m. However, Costa Rica is intending for the FBS to grow to the extent that it reaches at least US$50m by 2020, eventually increasing to more than US$100m of assets.

In 2015, the Costa Rican foundation Fundecooperación para Desarrollo Sostenible reported they have ₡750 million ($1.3 million) available to finance small- and medium-sized businesses which aim to improve quality of life or promote gender equality. The Fundecooperación has invested $35 million in more than 300 projects since its foundation in 1994.

José Montero Peña, from the foundation’s Credit Promotion Department, said: “The funds are part of our custom-made credit program aimed both at individuals and companies with environmentally sustainable projects or businesses.”

The foundation’s principal aim is to assist businesses or projects ‘related to agriculture, forestry, sustainable energy, clean technologies, sustainable tourism and gender equality,’ and others. It has opened a credit line for ‘cultural value’ businesses, encouraging both local people and expats or groups of people to apply for projects that involve the manufacturing or marketing of traditional Costa Rican goods and services.

Applying for this takes 40 days and as we’ve noted, it’s not just for local people. José Montero Peña says: “There are various projects by expats currently in operation. Among them are tourism, recycling and souvenir manufacturing businesses.”

Several smaller institutions also award funding, such as the UK-registered Rufford Foundation charity, which funds nature conservation projects across the developing world. The Foundation has awarded grants to more than 4000 projects in 156 countries and also operates in Costa Rica.

Have you lived in Costa Rica? Share your thoughts in the comments below, or answer the questions here to be featured in an interview!