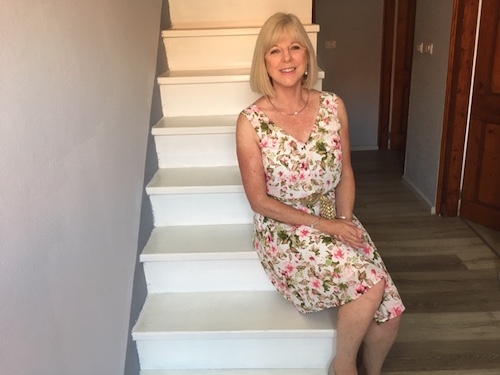 My name is Tina Donovan and I am Australian with dual nationality (UK). I am living in Istria, in the north west of Croatia, and have now been here for ten months.

For many years I have wanted to live in Europe. I visited Italy many times while still living in Australia and loved it. In some way it just resonated with me – I felt, right from my first moments on Italian soil two decades ago, that this should be my home. I always say that I have a European soul!My former partner and I talked about moving to Italy to live together, and this would have been easier than my eventual journey because he speaks Italian and holds Italian citizenship. When we separated, about five years ago, I assumed that my dream of living in Italy was over. However, I continued to travel there each year, on my own, and after a couple of years I started to think that maybe I could still live in Italy – perhaps I was strong enough, brave enough to do it alone.

I started to make some early preparations, such as finding out more about visa requirements, exploring the cost of living, and making some changes to my financial arrangements in Australia. It was clear that the only way I could get a longer term visa for residency was through my UK citizenship. Then the bombshell hit – Britons voted to leave the European Union. This brought my timetable forward by at least two years, as I needed to be settled and holding temporary residency before 29 March 2019. I set my departure from Australia at July 2018 to give myself plenty of time to make the necessary arrangements.

In January 2018 I was on holiday in northern Italy with my son and grandson and we decided to drive from Venice to Pula as I was interested to see what Istria was like. The weather has cold and rainy and not particularly conducive to sightseeing but somehow the region wove its magic anyway.

The thought occurred to me that I could live in Istria instead of Italy. The cost of living is lower; it is quieter and less chaotic than Italy; it blends wonderful aspects of Croatian and Italian culture; the people seemed more welcoming; and after all Italy is only 75 kilometres away. This thought quickly took hold and by the time our holiday was over I had decided that I would live in Istria, not Italy.

Moving here was very straightforward as I only brought clothes and basic essentials with me, leaving most of my possessions in storage back in Australia.

My first challenge was to find a house or apartment to rent, and I started my search while I was still living in Australia. This proved to be more difficult than I had expected because most property owners do not let their properties on long-term leases, preferring to make them available for tourists in the relatively short summer season. During the time I was searching there were only four properties for long-term rent in Pula. I had found a Facebook page called Expats in Istria so I placed a post on there asking for advice or recommendations for good websites to find a property to rent, and a member of the group offered me the opportunity to rent part of his house long-term. It was located in a small town not far from Pula called Vodnjan. I decided, after some discussion, to take it and it was the best decision I have made.

After arriving in Istria in August 2018, it was time to start the process of getting temporary residency. I had heard that this was complicated, bureaucratic and time consuming. The visa gods must have been smiling on me because, as an EU citizen, the requirements were pretty straightforward but it did take a couple of months to collect the necessary documents. By December, I was granted temporary residency for five years and I knew that my dream to live in Europe was now a reality – an amazing feeling.

I then set about the next tasks on my list: getting a Croatian driver’s license, obtaining national health insurance, buying a car and making friends.

The first tasks were relatively easy as long as I followed the bouncing ball step by step through the bureaucratic process and took advice from people around me. Making friends also was not too difficult but I soon discovered that if I did not reach out to the expat group in istria I would be quite lonely.

It takes time to make friends with locals. They already have full lives which includes their family and friends and they don’t need me. I need them more! Slowly, I am winning the trust and friendship of the people who live in my village. In the meantime I have created many new friendships with fellow expats. There is quite a strong and active group in Istria, all living within about 50 kilometers of me. My life is now very busy with social activities meaning that I have not even started to look for some volunteer work, something I intended to do months ago. I am just too busy enjoying myself!!

I love everything about my new life. Every day brings a new experience. It has given me the opportunity to extend and test myself, as I have made this move alone so can only rely on myself to solve problems. I can honestly say that there is nothing that I dislike about living here, except for the fact that too many people smoke which makes taking a coffee indoors on a winter day less pleasant than it might be. Apart from that, how could I not love this amazing land and seascape, the fabulous Istrian food and wine and the welcoming warmth of the people of Istria?

I do not know how long I will stay here, but it will be at least five years and probably much, much longer. I have decided to buy a home here because I cannot imagine living anywhere else.

If you have a dream to leave the comfort zone of your own country and move abroad to live, my advice would be to just do it! There will always be other expats who have gone before you and who are overwhelmingly generous in providing support and advice. And the happiness and sense of fulfillment that the experience brings far outweighs any short-term challenges that you may face.