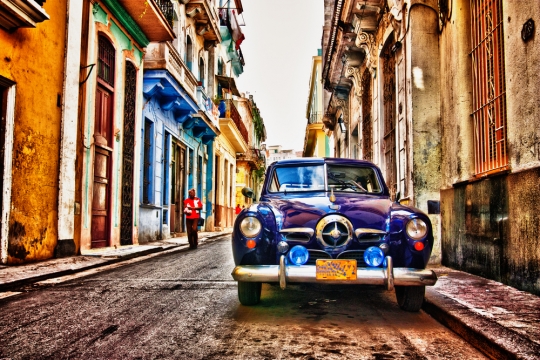 The Caribbean was the stage on which last acts of the Cold War played out, and while the curtain has not quite fallen on the decades-old stand-off, Cuba’s part is nearly over.

Just 90 miles from the United States, the socialist state has been far removed from the world stage thanks to an embargo that lasted nearly 50 years.Fidel Castro led his bearded revolutionaries to victory over the oppressive regime of Fulgencio Batista. While relations between Washington and Castro’s new government started off well, they quickly soured when the revolutionaries nationalised American-owned businesses in a wave of socialist changes.

US policy could not tolerate a communist neighbour so close to American shores, meaning the Eisenhower government implemented economic limitations on Cuba. Kennedy expanded these restrictions, leaving the island to rely solely on the Soviet Union for trade, aid and support.

The thaw in relations really began with President Obama’s 2009 decision to allow Cuban-Americans to freely travel to their homeland for the first time in half a century.

Further restrictions have been eased or lifted entirely, allowing the Cuban economy access to the American market place. Businesses across the globe are now eyeing Cuba as a boom-economy-in-waiting. Investors are stumping up capital to build factories and ferry ports on the island.

The lifting of the embargo is not the only change in Cuba. The retirement and eventual death of ‘Comandante’ Fidel Castro allowed his more liberal brother Raul to ascend to the presidency. This change in leadership ushered in a previously unseen level of economic freedom and opportunity for Cuban people, who can now start their own businesses, own their own homes and trade internationally. Many local people are seizing these new opportunities with both hands.

With so much economic potential and so many opportunities for entrepreneurship, visitors are flocking to the island. President Obama, Pope Francis and even the Rolling Stones have visited Havana to promote the re-opening of international relations.

Cuba is gearing up for an influx of tourism, resulting in a sprucing up of the tired parts of Havana, while maintaining the city’s iconic charm. There are even rumours of a US company setting up a retirement community on the island.

Despite these exciting new opportunities, it’s still not easy to start a new life in Cuba. It’s simple enough to obtain a 30-day tourist visa, but not so easy to remain in the country for longer. Even the Business visa has a limit of one month, requiring extra paperwork to prove your links to a Cuban business.

The state still has a hand in the allocation of jobs, meaning it is difficult to find work in Cuba without an existing connection. At present, most expats are likely to be working in a diplomatic capacity or in the American enclave at Guantanamo. As the country continues to open up, new opportunities will undoubtedly follow as industry develops.

There is a growing community of American people living in Havana, albeit only for a few weeks at a time. Tour operators who take groups around the island come and go throughout the year, claiming a new specialist visa each time they visit.

At present, if a Cuban person can do a job, they have priority over any migrant. This complicates the process of applying for a work permit. In order to qualify for a permit, you are required to already have a job offer. Even if you can find a job through this means, you will only be paid what a Cuban person would be paid, equating to about USD$25 a month.

Probably the easiest route into Cuba at the moment is as a journalist, writer or photographer. However, as a state with a tightly-controlled press, it can be a headache to get the right permits and permissions. And that’s before you try using the slow-moving internet connections to submit copy.

If you are lucky enough to find work in Cuba, the visa to apply for is the temporary residence, which allows a year of residency following the issue of a Carné de Identidad identity card. Currently, the only way to gain permanent residence is to marry a Cuban citizen.

If you happen to fall in love with and marry a local person, moving in with them is likely to be easier than trying to find your own accommodation! Like jobs, accommodation was tightly controlled under the Castros and is still in limited supply.

Many temporary expats elect to stay in hotels or ‘casa particulares’, which are en-suite rooms in a Cuban family’s house. These rooms vary wildly in quality, but cost is tightly regulated. It is possible to rent rooms and apartments for short-term vacation stays, but longer-term accommodation is harder to find.

Even for contractors working at Guantanamo, accommodation options are limited, and prices inflexible. Access to medical, dental and educational services are given to military personnel first. Contractors can find themselves left in the cold despite the Caribbean sun.

After decades in exile, Cuba is changing rapidly. Some Cuban residents express concern that their new-found freedom may come at a cost. They don’t want to lose the benefits of free healthcare, education and an economy where prices are controlled.

Cuban people recognise the opportunity that re-joining the global community provides, but as yet, there is no gold rush, charging headlong to Havana. Cuba’s past was tumultuous, her present is cautiously optimistic, her future is still not clear.

Have you lived in Cuba? Share your experiences in the comments below, or answer the questions here to be featured in an interview!