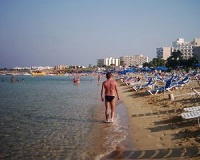 The Mediterranean island of Cyprus is blessed with abundant sunshine all year round. Its varied topography includes sandy beaches, cliffs, bays, forests and volcanic hills that serve as ideal locations for different types of activities. Cyprus is also known for its warmth and respect for foreign cultures, something that makes expats feel right at home. Another huge bonus of living here is the high standard of living, which is comparable to European standards. Here are some of the most popular locations in this ‘island in the sun’.Ayia Napa

The resort of Ayia Napa is located at the far eastern end of Cyprus’ southern coast. It is known for its vibrant nightlife and spectacular natural beauty. A large number of western expats have made their home here and there are good opportunities for those who want to invest in property. Ayia Napa’s most famous location is ‘The Square’ where plenty of nightclubs, restaurants and cafés are located. Due to its incredible topography, there are a variety of water sports to explore too. Ayia Napa is hugely popular with tourists and this may be a hindrance to those expats who prefer a more slow-paced island lifestyle. The summer season in particular can be very busy, as it’s the peak time for the tourism industry.

Known as the culture capital of Cyprus, Paphos boasts a rich cultural heritage. Some of the main attractions in this coastal city are the Adonis Baths Water Falls, the Tombs of the Kinds and the Kato Paphos Archaeological Park. For expats, the benefits of living here include good quality schooling for their children. Cyprus in general is a family-friendly location and Paphos in particular has some very good international schools such as the International School of Paphos. Healthcare is also of a high quality here and the general hospital in Anavargos is a reputed facility equipped for routine and emergency medical conditions. Paphos also has its own airport and is well connected to other locations on the rest of the island.

The second largest city in Cyprus, Limassol is an ideal location for those who enjoy the proximity to the sea, but also want to be near business and social networks. It is the country’s largest port and is connected by shipping lines to three continents. The expat population in Limassol is mostly of the professional category. There is also a considerably large Russian expat population living here. As with most locations in Cyprus, it’s also popular with the tourist crowd. Limassol plays host two festivals, the Carnival in February – March and the Wine Festival held in September. The atmosphere in Limassol is that of a lively metropolis filled with many modern restaurants and trendy shopping destinations. As a result, the property prices for apartments and villas tend to be on the higher side.

This is among the oldest cities in Cyprus. The coastal villages of Mazotos, Kit and Pervolia have seen considerable development over the years and offer some good accommodation options. Going inland, there is the mountain village of Ayia Anna with its unique stone buildings and archaeological sites. The trendier area of Larnaca is the strip that runs from Larnaca to Dhekelia. This is a tourist hotspot and has many restaurants and bars. There are some moderately-sized beach-facing apartments here, for those who want to stay close to all the action. Larnaca has seen a great deal of growth in recent years and many of the small villages have turned into suburbs. Expats usually prefer to secure accommodation along the seafront or in the main town area in Larnaca.

Platres on the southern slopes of the Troödos Mountains is a great place for pleasant hikes and picnics. For the more adventurous, there is skiing in the Troödos Mountains during the snow season that lasts from December to April. It’s the perfect spot to live if you want to be far from bustling city life. Rich with greenery, Platres is located about 40km northwest of Limassol and is a popular investment destination for property buyers. It draws a steady stream of tourists and therefore is equipped with good infrastructure. Apart from excellent holiday homes, there are also plenty of hotels, camping sites and restaurants in Platres.