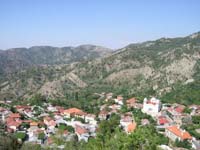 The Mediterranean lifestyle and pleasant climate makes Cyprus the ideal destination for those who want to strike the right balance between work and leisure. The island country also retains its historic heritage and has many archaeological sites, ruins and museums. The people of Cyprus are as warm as the 340 days of sunshine the country receives and foreigners are treated with great hospitality. Here are some of the reasons why moving to Cyprus may just make you happier.Vibrant culture

Cyprus has an incredibly rich culture and age-old traditions are kept alive through the generations. Cypriot people are known for their warmth and friendliness and visitors and foreign residents will have little trouble feeling at home here. Celebrations are commonplace and every week witnesses an event of some sort such as a festival or a day dedicated to a particular saint. The island owes its cultural heritage to the influences left behind by several civilizations as it served as an important trading post for a long period of time. Towns like Paphos, Larnaca and Limassol all have their own festivals that draw many visitors from within and outside the country. Expats can also look forward to some of the traditional festivals such as Carnival, Anthestiria (Flower Festival), and Kataklysmos Day (Festival of the Flood).

Cyprus was once a British colony and became independent in 1960. The country still houses a considerable number of British nationals. The legal system and banking system is based on the British systems. Cyprus has the distinction of having the third highest percentage of foreign citizens in the EU. This includes citizens from other EU countries and non-EU countries. The British expat community is the largest, but there are also well-established communities of expats from other countries. Moving to a country with an already existing expat community is an advantage for many newcomers, as it makes the transition process easier.

The healthcare system in Cyprus meets international standards. Most of the medical professionals are trained overseas and are fluent in English. It is also easy to conduct business here as the much of the population speaks English. Both English and Greek may be used while conducting business. Getting accommodation is relatively easy in Cyprus as the process is straightforward and rental costs are affordable. The road system is commendable and has both Greek and English signage. Cyprus also has an efficient postal service. Expats will be able to choose from a wide variety of reputed schools for their children. Restaurants, cinemas, art galleries, clubs and gyms can be found across the island. In addition to the low cost of living, expats will also benefit from the favorable tax system and the local infrastructure, which is encouraging of businesses. Cyprus also has two international airports and port facilities that make it easy to travel in and out of the country.

Cyprus is the nature lover’s paradise with its forest-covered mountains, long stretches of sandy beaches and stunning coastline. Cyprus lies along the migration path of birds between Europe, Asia and Africa and therefore serves as an ideal location for bird watching. The island also has a treasure-trove of plant life in the form of carob, olive and citrus trees that are found in the fertile plain of the northern coast. In autumn and spring, the Mesaoria Plain is lush with wildflowers and flowering bushes and shrubs. Cyprus’ national animal is the Cyprus mouflon, a variety of wild sheep that live in the forests of the Troodos mountain range. The beautiful, clear waters of the island are home to Mediterranean monk seals, Loggerhead sea turtles and dolphins. The warm climate makes Cyprus an excellent place to enjoy the sea and sand and engage in a variety of outdoor activities.

Cypriot cuisine is best enjoyed slowly, outdoors and with family and friends for company. Cypriots love their food and are passionate about it. Any conversation almost always features some small snack or beverages such as coffee or beer. The cuisine bears Greek and Arabic influences and features popular dishes such as the traditional meze, a series of home-cooked dishes on small plates such as moussaka, grilled spiced meats, casseroles and Cypriot halloumi cheese.