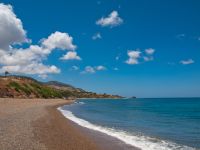 As determined by the Köppen climate classification system, Cyprus is a subtropical, semi-arid climate, a designation it shares with much of Australia, South Africa, Spain and the main island of Japan (Honshuu.) For those unfamiliar with the term, this denotes weather features such as a wet season during the winter, during which period temperatures rarely sink beneath 6-13°C. Subtropical regions can vary in both their level of vegetation and their temperatures from one ‘regime’ to the next – the savanna regimes of the sub-tropics, for example, have their wet season in the summer rather than the winter. What being in a Mediterranean subtropical regime means for Cyprus, though, is a highly predictable pattern of weather events, which you may notice makes the locals fairly indifferent to things such as weather forecasts when the summer rolls around.

The population center of Nicosia provides as good an example as any of what Cypriot citizens deal with weather-wise: mean temperatures during the summer months of June-August are virtually always hot and sunny, with daily high temperatures typically ranging from 34-37°C. Such temperatures, for the initiated, will make it clear why the similar Mediterranean climate of Spain invented the mid-day siesta to avoid working during peak heat hours (as well as the month-long holiday period in July or August.)Air conditioners in the city can be pushed to their limits at times of peak heat, being one definite source of the power outages to affect both halves of the island, and so – as an extra precaution – you might want to seek out alternate means of cooling off. If given the choice, you may want to select an apartment or hotel room higher off the ground to increase your comfort level. If you dislike hot temperatures, and are bothered by the additional stress that tightly compressed humanity can add to the mix when you feel overheated, then August – the local tourist season – is probably a good time to avoid visiting Nicosia or other urban areas of Cyprus.

Average precipitation during the summer period is unimpressive, and this sharply differentiates it in “feel” from the humid type of subtropical climate found in Eastern Australia, the southeast United States, and much of Japan. Nicosia’s rainfall during June is usually no more than 1.3 days of the month, with August being even more parched (at 0.1 total days of rainfall equaling 1mm or more.) Given that Cyprus as a whole is highly reliant on rainfall for its water supply, this is something important to note for those who hope to avoid offending the locals: the threat of water shortages means that, as a rule of thumb, it is a good idea to be conservative with water use.

The low availability of summer rain also means that areas closer to the sea may be more suitable for those not yet indoctrinated in the ways of warm weather (as well as those who have severe allergies, for whom the sea air can have tremendous curative properties.) In other words, a port city like Limassol, Paphos or Larnaca will be more attractive than the inland environs of Nicosia. Evenings along the coast can be a pleasant time for social gatherings and relaxation.

It’s also useful to note that Cyprus is hardly a Kansas-like flatland, and there are some areas of elevation that may allow for an escape from the monotony of hot and sunny days. However, transplants from arctic climates, and those just nostalgic for some snow, will have to seek refuge in the Troodos Mountains located in the middle of the island (skiers can rest assured that there are multiple ski slopes located at the high peak of the majestically named Mount Olympus, and worshippers of Aphrodite will be comforted to know that one of the promontories is a temple to the goddess.)

For refugees from Europe’s colder or rainier climes though, the predictability or consistency of Cypriot weather can be just the ticket: compared with the paltry, double-digit number of sunshine hours that England receives in December, the coastal areas of Cyprus can claim close to 200. Familiarity can breed contempt for just about any type of climate, so you may wish to consider Cyprus as a travel destination if you feel that a subtropical climate might be a welcome change of pace.