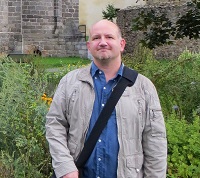 My name is Kevan Vogler. I’m originally from Edmonton, Alberta in Canada

I moved to Brno, Czech Republic in 2004. Partly for romantic reasons and partly for a much needed change in life in general

The biggest challenges were bureaucratic ones. There was a lot of paperwork as the Czech Republic can be very bureaucratic.Are there many other expats in your area?

Brno has a significant expat population for its size. There’s quite a lot of foreign workers and students here.

Generally quite good. The Czechs are a pretty relaxed group of people overall and not difficult to get along with once you get to know them.

The pace of life is fairly relaxed and there’s lots to do in a fairly small place.

There’s not a lot to dislike in my experience. Though the initial bureaucracy gave me fits at times.

There’s not a lot of political correctness in the Czech Republic. When I left Canada, it was part of life and sometimes it felt like you couldn’t open your mouth and say anything without someone telling you it was “offensive” in some way. I’ve never really run into such attitudes here. People might disagree with you here, but I’ve never seen anyone tell you that you couldn’t say something because it might offend this, that or the other individual or group.

In most regards, I find that my Czech Koruny will go further in relation to my income than my Canadian Dollar did.

Czech cuisine is, for the most part, typical central European fare. That is to say it’s rather the old school peasant food with lots of calories and starches to see you through a full day of equally old school farming. There’s lots of very tasty dishes, but many of them will make you a bit sleepy after eating.

There’s a few dishes in Czech cuisine I’m not keen on, but the real downside of it is that there’s relatively little in it fit for quick, light snacking or quick preparation. It’s mostly substantial meals that take significant time and effort to prepare.

Strictly in the context of the Czech Republic, my typical advice is as follows:
1:Not all Czechs like beer! Beer is a big part of the country’s history and stereotype, but I’ve met several Czechs who hate the stuff. Don’t assume all Czechs love it.
2:If you have the opportunity to learn some Czech before you leave your homeland, do it!
3:Find out what papers you will need for your reasons to be in the country BEFORE you leave home.
4:Make Czech friends quickly after you arrive, they will make your transition much easier.
5:Czech cuisine is VERY meat oriented. If you’re vegetarian, expect difficulties.

To take life as it comes