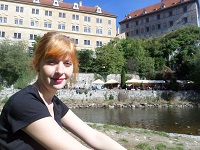 Ahoj! I’m Cynthia, an American expat from Washington state who is now living in the Czech Republic with my fiancé (then boyfriend).

I initially moved to Prague in November 2012 because I really wanted to live and work in Europe, and I ended up in the Czech Republic because I was taking a teaching certification class there. I had been to the country twice before, and knew I would be perfectly happy living there for awhile. In early 2013, we made the move two hours south to České Budějovice, located in the South Bohemia region of the country and have remained there ever since.What challenges did you face during the move?

The biggest challenge was the fact that we thought our move was going to be temporary. We had just been traveling through the UK, France, and Germany for three months and thought (incorrectly) that our move to Czech Republic might be for six months to a year, maximum. Because of this, we had almost no possessions (besides what could fit in a large backpack) for over a year! I didn’t want to collect any belongings if it meant pulling up stakes in a few months time. The feeling of impermanence always bothers me, even today.

We were lucky to receive personal assistance from my fiancé’s boss, who found a great flat for us that met our criteria and set up a rental agreement with a wonderful family that was happy to take in an American couple into their building!

When you move out of Prague, your contact with other Native English speaking expats or other Americans goes waaaay down… there just aren’t so many of us outside the capital. I haven’t spoken with another American in over six months! Our relationship with the locals has been wonderful, and I’m grateful we’ve met so many wonderful people. A parent of one of my students has loaned me her bike indefinitely and we’ve even been invited for holidays at a friends’ home. I am always astonished when I think about the wonderful, kind locals we’ve met here.

There is so much to like, which is probably why we’ve stayed so long! First of all: the pace of life is slow and people are so relaxed down here. I love that the town is small enough to walk most places you need to go, and public transport is excellent. I love how South Bohemia is sort of tucked in this took between Bavaria and Upper-Austria– the location is so central that it makes travel (one of my favorite hobbies) a breeze.

The nightlife scene is really not to my liking, unfortunately… there are some pubs, bars, and clubs but it’s rare that a really good band comes through on their tour to this small city of 100,000. I miss English-friendly cultural events, festivals, and feeling like I’m in the center of everything like I did living in Seattle and working in the heart of downtown everyday… big city life. The shopping (both food and clothing) is not really on par with what I’m used to back home, and of course, trans-Atlantic plane tickets are so expensive in and out of Prague making trips back home very far and few between.

Initially I would have said all of the grumpy faces from passing strangers compared to back home, but after I passed the two year expat point, this started to not bother me anymore! These days, I would say that Czechs are so much more hospitable and giving than I am used to. Never empty handed, always ready with a birthday or Christmas gift, and they look you in the eye when you clink glasses. Back home, my own best friend probably wouldn’t even buy me a birthday gift!

Quite a bit! We have to go to two or three different grocery stores on an average week to pick up all of the items we’re looking for as many grocery stores here are not exactly “one stop shop” establishments. Since I’ve moved to Budejovice, I’ve bought all of my clothes at H&M or Marks & Spencer unless I can hold out for when we go on a trip! (not so much selection) My fiancé has experienced a slight frustration that he is unable to buy contact solution almost any drugstore in the country (besides Rossmanns) and buying it at a pharmacy is about twice as expensive as what it would cost back home.

Czech food is fine, but I’m not a big meat-eater so I cook for myself most of the time… however there actually are decent vegetarian options to be found even at most traditional Czech restaurants! I love česnečka (garlic soup) served with croutons and cheese. It’s the perfect thing for a cold day or when you’re feeling under the weather! We both are not a big fan of Czech bread, however… we typically buy Norský chleb (Norwegian bread) made by high-quality local bakery. In this way, I guess we’ll never be truly Czech!

If you’re thinking that moving to the Czech Republic might be for you, I would say go for it… and don’t be afraid to leave Prague! I feel like I’m really living in the true Czech Republic (and not just the hard-to-leave Prague bubble), and It’s been an amazing cultural experience so far. If you move outside the capital, it would help a lot to learn a bit of the local language. Don’t forget your winter jackets, a great pair of walking shoes or boots and your favorite cosmetics and clothing from back home.

That’s a really good question… one that’s hard for even us to answer! We are heading back to the United States for the first time in almost three years (I know, that’s a long long time) this spring to get married and visit with our friends and families. However, we’re headed back to South Bohemia afterwards to resume normal life. Moving might be in the cards for us in the future (maybe to a different country?), but for now, we are really enjoying the relaxed life here.