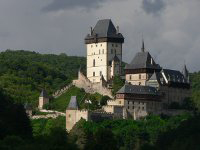 The Czech Republic is a land of fairy tale castles, delicious cuisine and fine beer. There are numerous things to do here, but if we really had to pare it down to just five must-have experiences, we’d choose these:

Concert in a cave

The Kateřinská Caves were named after a shepherdess, Catherine, who, according to local legend, found the cave while looking for her lost sheep. Situated in the heart of the Moravian Karst, it is about 2 kilometers away from the Punkevni caves. The most famous part of these caves is the stalagmite ‘witch’, which is beautifully lit by colored spotlights, and the Bamboo Grove, where you can see several stick-shaped stalagmites.One of the cave chimneys even contains the skeletal remains of cave bears. The caves have excellent acoustics and serve as an ideal place for concerts. These take place in the main dome, which is 95 meters long and 44 meters wide.

Off the beaten path

Olomouc is the old capital of Moravia and a highly underrated destination. Tourists hardly visit this city, and therefore it is far cheaper than the more popular tourist areas. Olomouc is as scenic as Prague, and some claim its cityscape is the most attractive in all of Europe. You can do many things here: visit the astronomical clock in the town hall; explore the streets around the old city center, where you can also see the Holy Trinity Column; feast on delicacies such as fruit dumplings, honeycake and Olomouc’s famous cheese; sample the nightlife of Olomouc by visiting its many pubs, breweries and cafes; or explore this quaint city and all its lakes, mountains, castles and caves by bike.

One of the most rewarding experiences you can have in a new country is to get invited to someone’s home for a good meal. This will give you a taste of real Czech cuisine, different from that which is available in most restaurants. Traditional food is often cooked on holidays or Sundays. Some dishes that are rare, if not impossible to find, in restaurants include the simple and rustic Brambory na loupačku, which means ‘potatoes to be peeled’ and consists of whole unpeeled potatoes boiled in a large pot. You simply take a hot potato, peel it yourself, sprinkle some seasoning along with butter or some curd and eat it. This is usually followed by a tall glass of cold milk. It’s a popular countryside dish, much loved by the locals.

Mushroom picking is a common activity in the Czech Republic. You don’t generally find forest mushrooms in restaurants, but they are used generously in home cooking. One instance of this is Smaženice, which consists of mushrooms stewed with onion, caraway and some fat, along with eggs. There is also Smažené bedly, in which the caps of parasol mushrooms are breaded and fried; Černý kuba, made from dried mushrooms and barley; Houbová omáčka, a mushroom sauce served with meat and drumplings; Bramboračka s houbami, a type of potato soup with mushrooms; and Kulajda, a mushroom and cream soup.

You can even go on a little mushroom picking expedition on your own. Just remember that there are many different mushroom species, and not all of them are edible – some may even be poisonous. It’s a good idea to take along an experienced mushroom-picker who can show you the ropes.

Partying in a nuclear bunker

Bunkr Parukarka is a lively nightclub in what was once a 1950s underground nuclear bunker. Enter through a graffiti-covered steel door that is set into the hillside and wind your way into the music-filled bunker below via a metal staircase for a truly unique experience.

A taste of culture

For a taste of some cultural history, you can visit the Jewish Quarter, north of the Old Town Square, the place where writer Franz Kafka spent a considerable portion of his life. Stroll through the streets of the little district that used to be home to Prague’s Jewish population. With a ticket, you can also visit the Jewish Museum. Other activities include visiting the Lennon wall, where everyone can contribute to the mural dedicated to John Lennon; and exploring the ruins of the Vysehrad castle and the adjoining graveyard where the Czech Republic’s most noted playwrights, poets, scientists, artists and composers are laid to rest.