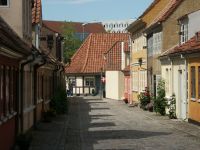 The Danish city of Odense is the country’s third largest in terms of population, taking the bronze to Copenhagen’s gold and Aarhus’ silver. Though the population of Odense only amounts to roughly a fifth of Copenhagen’s, it boasts a number of impressive features that make it suitable for those who are interested in the Scandinavian lifestyle, but prefer a compromise between hyper-urbanization and the close-knit ‘small town’ community.

Odense is located right in the middle of the Funen Island, which itself lies between the isle of Zealand and the Jutland peninsula. As such, the more condescending residents of both Aarhus and Copenhagen sometimes joke about it as being nothing more than a service station along the E20 highway that connects the two cities. Proud Odense residents are likely to return fire by claiming that – as it says on an official website promoting the city – Odense is at the geographical “heart” of Denmark.Things to do in Odense

Odense has a quaint charm and sense of youthful nostalgia to it that can be attributed to, among other things, its status as the birthplace of Hans Christian Andersen, one of the world’s preeminent writers of fantastic tales (The Ugly Duckling, The Little Mermaid and The Emperor's New Clothes being just a couple from his catalog of well-aged moral fables). Statuary of Andersen can be seen around the city – including one unorthodox design that is partially submerged in water – and his influence also lives on in an Odense-based commemorative gardens and museum. An unofficial motto of the city – “to play is to live” – also says much about the childlike sense of wonderment and inquiry that is seen as an asset here (by the way, there are no fewer than 240 public playgrounds in the city).

On the other hand, there are decidedly more adult pursuits represented in town as well, such as a few acclaimed watering holes: the Christian Firtal bar along Vintapperstræde, when hosting its annual Pale Ale Festival, is occasionally recommended as a more low-key alternative to the busy Copenhagen Beer Festival. Gastro pubs and other fine dining options are not in short supply: local favorites like Druen og Bønnen provide professionals with an opportunity to unwind with some coffee and gourmet chocolates; while the Bull Diner will help to ease the homesickness of expatriates from the world’s more burger-friendly regions.

Recreation is also on tap in the form of cultural events (e.g. the Odense Symphony Orchestra) and sporting clubs, such as the Odense Golfklub. The local football club – Odense BK – have a fanatical following that still speaks reverently of its “Miracle in Madrid” during the 1994-1995 UEFA Cup run. All told, Odense should be very culturally satisfying for all but the most restless and energetic individuals: and given that it has the highest percentage of student population in all of Denmark, it is already well equipped to cater to restless and energetic individuals.

There are plenty of livable areas in Odense outside of the dreary Vollsmose suburb, which is often the focus of the Danish media’s crime-related stories (gaining special notoriety for the home-grown terrorists captured there in 2006). Sadly, a Web search for “Odense neighborhoods” or the like will bring up numerous stories about this area before returning results dealing with areas that are less prone to social conflict. Whatever your opinions are upon reading some of these stories, though, it seems that there is very little need for a professional expatriate to be living in or regularly passing through here.

The central neighborhood along Filosofgangen, near the Munke Mose Park, hosts several very highly regarded hotels (e.g. the AnsGarhus Motel) and is a remarkably peaceful living environment given its centrality to the action in the city. “Walkability” is very possible here, and home prices are not extravagant for individuals who are high earners. For example, a three-bedroom residence within Odense can typically be rented for 9,000 Danish kronor a month (roughly $1,500 USD; £1,000 GBP).

Business exists within Odense in areas that may be surprising to those just discovering the city: one well-kept secret about Odense, for example, is its status as the third largest research and development city in the world for robotics. Meanwhile, international investment in the city is also expected, over the next decade and a half, to reach 3.2 billion Euros. Among current developments are a light-rail system for the city, which intends to link the Campus Odense with the New Odense University Hospital (both the rail project and the hospital have expected completion dates of 2020). The city’s ambitious self-set goal of becoming “the most sustainable city in Denmark” is another venture in which foreign help may be sought out; as such a broad goal requires the specialized knowledge of everyone from energy industry employees to policymakers.