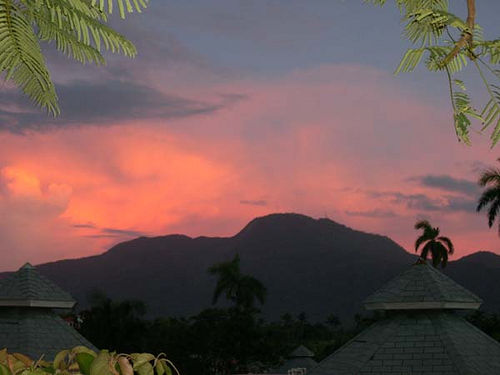 Making a new life on a Caribbean island is a common expat dream. The Dominican Republic tends to be one of the more common choices, for a number of different reasons. In many ways, life in the Dominican Republic is great – expats love the sunny weather, the relaxed pace of life, the natural beauty, the local culture, and the warmth of the people. However, every place has its darker qualities, and many would see that the Dominican Republic has more than its share of them.Natural disasters

One of the factors that draws people to the Dominican Republic is the climate. The weather here is more diverse than most outsiders realize, due to the diverse topography, but in general, it’s safe to say that the country enjoys a tropical climate, with a long and intense monsoon. For the most part, this is great, but the Dominican Republic also suffers quite a few tropical storms, hurricanes, and cyclones, and while the last really severe one was a while ago, there’s a certain amount of disruption and damage every year. The Republic is also in a region that is extremely prone to earthquakes. Again, the last really major earthquake was a long time ago, in 1946, but there were smaller ones in 1984 and 2003, there are rather frequent tremors, and there’s always the risk of a big earthquake striking.

In many ways, the infrastructure in the Dominican Republic is quite poor. Electricity is the biggest problem – some areas have 24-hour electricity (or close to it), but in other areas, there are regular power cuts. No matter where you live, it’s important to have an inverter as a backup, and the size and capacity will depend on the supply in your area and on your needs. If the power supply in your area is particularly poor or if your needs are high, you might prefer to get a generator.

In general, services in the Dominican Republic aren’t great, although in many cases this is just a matter of everything moving slowly. Things will get done, but they’ll get done on island time.

Crime and other dangers

Safety is of course a much bigger concern for expats, and the Dominican Republic doesn’t have the best reputation here. Unfortunately, this reputation isn’t far from the truth. There is a lot of crime in the country, and a good bit of it is violent. The good news, however, is that most expats live peaceful and safe lives here. If you encounter any crime, it’s most likely to be petty thefts and scams. There is of course always the danger of something worse, so it’s important to be cautious and alert, as you would anywhere else in the world. Some parts of the country and of each city are worse than others, and may be best avoided. As long as you’re not careless, and don’t flaunt your belongings, get involved in anything illegal or take unnecessary risks, you should be fine.

Driving in the Dominican Republic has been described as particularly dangerous, and this is another area where you will need to be cautious and alert. The country has in fact been described as the most dangerous in the world for drivers, and almost all of it is due to the general disregard for traffic laws and road safety, by both law enforcement and the general public. This also affects pedestrians, who make up a large proportion of traffic fatalities. There’s no way to completely eliminate this risk, but you can considerably reduce it by following the traffic rules and staying safe yourself, no matter what people around you are doing.

The Dominican Republic has been described as one of the worst countries in which to do business. In fact, a recent report placed it right at the bottom of the list, after countries like Jamaica, the Kyrgyz Republic, and Pakistan. This is partly due to some of the factors already mentioned here – the poor infrastructure, the slow/poor services, and the susceptibility to earthquakes and hurricanes. But in addition, there are the massive problems of corruption, bribery, red tape, and harassment by police and local authorities, as well as unethical business practices. The difficulty of doing business in the Dominican Republic is major factor driving expats away from the country.

All that having been said, many expats do of course move to the Dominican Republic and have a wonderful time there. Always remember to do your research and decide what you will and won’t be comfortable with before you make the move.