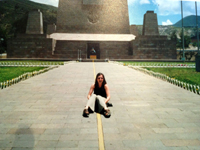 My name is Leigh Anderson. I’m a freelance writer from Canada and I love the opportunities my work affords me to constantly meet new people and live in new places. Through my work, both professionally and on a voluntary basis I’ve been able to spend several years living abroad, first in South America and then in South East Asia. Although there are unique challenges that come with being an expat in a foreign culture, the life experience gained far outweighs any costs. Most importantly, I’ve made life-long friendships with people I would never have met had I passed up the opportunity to move to a new place.

I moved to Quito, Ecuador in 1999-2000.I was disillusioned with my work in the banking industry and was ready for a major life change. A trusted friend and world traveler who had just returned a volunteer construction project in Ghana, Africa suggested that I should look for opportunities to move to a less developed country where volunteers were needed. When the opportunity arose to move to Ecuador, I jumped at the chance and happily, my younger sister did too. To the surprise of our family, we quit our jobs and quickly starting making arrangements with contacts in South America.

While we had done our best to make arrangements ahead of time, we quickly realized when we landed in Quito that there were going to be some serious challenges we had not anticipated. Safety was especially an issue because we were two young women traveling with fairly limited Spanish. The apartment we had rented sight-unseen was in a small town with no other foreigners. In addition to being a complete spectacle and the target of some unwanted attention where ever we went, we also realized that we were not compatible with the landlord and her family who lived below us, who felt at liberty to come and go through our apartment at any time of the day!

After just a few days of living in the apartment we had arranged before arriving in Ecuador, we realized that we would have to find a better living arrangement closer to the center of Quito. We paid an extra month’s rent as a goodwill gesture and moved our things to a hotel in Quito while we began searching for a new place to live that was more suited to our needs. Although an unexpected move so soon after arriving was stressful, having contacts within our volunteer network was a tremendous help, and we were quickly introduced to an Ecuadorian/Canadian couple who were looking to sublet two extra rooms in a large condo apartment.

There are expats almost everywhere you go in Ecuador, even in small towns and destinations that are far off the beaten track. Of course, certain pockets of the larger cities and coastal towns appeal to surfers and backpackers, who eventually decide to make Ecuador their home and will set up a small community of guesthouses and cafes that appeal to other expats. We met many other Australians, Americans and Germans who had moved to various parts of Ecuador either for work or for personal reasons. There is an instant connection when you meet someone in similar circumstances and we’d often find ourselves swapping hilarious stories with perfect strangers about the joys and perils of living as a “gringo” (expat) in Ecuador.

Overall, our experience in Ecuador was an extremely positive one. The couple we sublet our apartment from quickly accepted us as part of their extended family and would often include us in their parties and get-togethers. In our volunteer work, it wasn’t unusual to be invited into the home of a complete stranger or to be given help when we ran into obstacles and challenges due to the language barrier. Local children could not hide their curiosity about us and we would often find smiling faces outside our window as they tried to get a glimpse of our daily activities. Interacting and enjoying the nuances of day-to-day life in Ecuador was one of the highlights that we would never have experienced had we visited only as tourists.

One of the most enjoyable aspects of Ecuador is the relatively easy and affordable travel. With just a short flight or a day’s bus ride, you can easily travel from spectacular mountain areas, to pristine beaches, or jungle resorts. The diverse scenery Ecuador offers within a small country really is unmatched. We enjoyed having access to some of the comforts of home that were accessible while living in the city, but when we felt the need to get away, or to have a “warm-up” at a beach during the cooler part of the year, it was nice to know we could do so.

There are certain dangers that are to be expected in moving to a third world country and Ecuador is no exception. As mentioned earlier, safety can be an issue when traveling alone or even as a group of two to three single women. Break-ins and other thefts are extremely commonplace. Driving can also be a terrifying experience, with the combination of narrow mountain passes and untrained drivers. The wreckage caused by a runaway bus or tractor trailer is a common sight, and Ecuador is often listed as having some of the most hazardous driving conditions in the world. In less urban areas, access to good levels of healthcare can also be an issue.

Prepare, prepare, prepare. Read as much as you possibly can to educate yourself about the unique customs, culture, lifestyle and challenges of life in Ecuador. If you are not already fluent in Spanish, take a course or purchase software to help you learn at home. Being able to communicate effectively with local people will help you assimilate and enjoy life much more quickly than if you are limited to making friends with other expats who speak your language. Be open to new perspectives and ways of doing things and try to let go of any preconceived ideas or prejudices. Understand that as an expat, you will at times experience frustrations but as much as possible, treat local people with dignity and respect, keeping in mind that you are a visitor in their home territory, no matter how long you’ve lived there.

Now that I have young children, I feel it’s important to provide them with as many experiences and exposures to new cultures as possible. Over the years, I can say we’ve really gotten the process down to an art – we know what we need and how to settle in to make a new place feel like home and our kids are accustomed to travel. I would love for my family to see where I lived in Ecuador and although we have no plans to move back on a permanent basis, I would take the opportunity to visit and reconnect with old friends in a heartbeat.