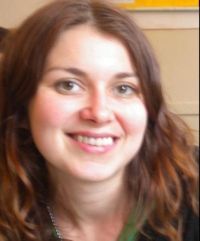 I’m a 34 year old Slovak girl (I write a ‘girl’ and not a ‘woman’ because I still feel very young), who lives in Ireland. I’ve just finished my bachelor’s studies here: in languages, linguistics and culture. This was not the first time I studied though – I really like studying! I suppose I’m unusual in this compared to my counterparts: I’ve never had a job longer than half a year, I don’t drive, I’m not married and I don’t have children. I live in a small rented apartment in central Dublin. I enjoy travelling, reading, watching movies, walking/hiking and playing board games.

I arrived in Ireland in December 2006.At that time, I wasn’t very happy in my office job in Slovakia so when my Slovak friend mentioned that they had a spare bed in their rented house in Ireland and that I could come, I took her up on the offer. My friend lived with her Slovak boyfriend and another female Slovak friend in Gort (a small town in the west of Ireland, close to Galway). For some time, I was sharing the room with the other Slovak girl. The original plan was to stay for about half a year – earn some money, experience something new and go back to Slovakia. However, this is not what happened and I’m glad about it.

At the beginning I thought that I only came for a short time, therefore I was bringing some of my things back to Slovakia during holidays, only to miss them later, when it was obvious that I was not leaving yet. I still don’t like the fact that I have some things in Slovakia and some here, so I can’t feel at home neither here nor there.
I still haven’t succeeded in finding my dream job here – Irish employers might prefer to employ their own nationals, which is only understandable. Translation jobs are scarce and there’s a big competition for administrative roles. And although there is a demand for Slovak community interpreters, I prefer working at the computer.

At first I was lucky because I could stay at my friend’s. However, after four months of living in the small, quiet town, I grew tired of it and wanted something new. With my room-mate, I moved to Galway – a bigger and more exciting town full of tourists and students. Again we shared a room, but after some time my room-mate needed more space. Finally, we separated and since then I have not lived with other Slovak people. I actually prefer living with the Irish or with foreigners now – it is not good to stay in your own small enclave when you’re abroad. Since December 2006, I’ve lived in as many as nine different places and three different towns. In 2010, I changed Galway for a yet bigger city, Dublin. To search for new accommodation, I was first using newspaper (Galway Advertiser) and then internet (daft.ie).

Dublin is a multicultural city, with plenty of expats – sometimes it’s even hard to meet an Irish person! Joking. But you would see many foreigners here, especially in retail and catering jobs. As for Slovaks, the community is quite tight. There is even one Slovak grocery shop here (there used to be two) and at least three Czechoslovak pubs/restaurants. Slovaks even have their own magazine Slovak in Ireland and ‘Slovak in Ireland House’ houses Slovak library and offers various services and advice for Slovaks.

There is also a Sunday Slovak mass, annual Slovak ball and various concerts and events featuring Slovak artists. That said, I’m not very engaged in these happenings. However, I went to watch old political documentaries about the fall of communism in Czechoslovakia as part of Slovak cultural week, and I enjoyed it a lot.

I’m a person who doesn’t necessarily need to keep in touch with many fellow Slovaks. I only have three good Slovak friends in Dublin. My other Slovak friends from Gort and Galway have already left Ireland for good.

I have good relationship with the locals; however, they are not that spontaneous. I haven’t found any real Irish friends yet – maybe it’s also because of my age and personality (for example, I don’t go out too much). While I still shared accommodation, I got on well with my Irish flatmates – we would still keep in touch on sporadic basis; however, it’s not like we would call one another or stop at our houses for a casual chat.

I find it easier to have foreigners as friends – people who have also experienced the same as me (leaving their home country and struggling with similar problems). Irish people are friendly and chatty, but relationships with them can be a bit superficial. This changes when you get to know them better (although achieving this is hard) – I have an Irish boyfriend and both he and his parents are lovely to me.

I like that the salaries here are quite high and therefore the standard of living is better. For example, I like to eat organic food, which would be hard on average Slovak wages. Even though the salaries here are almost four times higher than in Slovakia, prices of some products (clothing, electronics and some foods) are the same.

I also enjoy being close to the sea and ocean and the fact that it never gets too hot here (although this can be a disadvantage too at times). Another thing that I enjoy is that there are so many cultural events and festivals here, many of them for free. Life is more relaxed, people go out more, sit on grass, stroll in parks. Customer service is much better here; shop assistants and waiters/waitresses can be rather rude or apathetic in Slovakia. Last but not least, I enjoy being in a country where English is spoken – I’ve always loved this language.

I miss my family and friends in Slovakia; it’s a shame I can’t see them more. I don’t like the fact that even my Irish boyfriend isn’t in Ireland – you could say that he is an expat himself, studying abroad. So sometimes I feel lonely. On the other hand, living alone in a foreign country suits me; it would be ideal if everyone had more money and time to travel and visit more often. I also don’t like that it’s quite hard for a foreign person, unless he/she is really qualified and specialized in a particular field, to find a good job, other than cleaning, waitressing and call service.

Not everyone is suited to a life abroad. Some people come here and then they are unhappy – they constantly complain about the weather, about the high prices of alcohol, about the locals and their culture. They are here with a sole purpose of earning money and returning home as soon as possible. Even though such life is possible, it’s definitely not a good attitude. You have to enjoy your present life and search for good things all the time. You should broaden your horizons, meet new people, see new places and experience new food. You should be patient but also persistent and initiative – things don’t usually come on a silver platter.

I would like to stay in Ireland longer although I’m not sure if for good. Basically as long as I’m happy here, which I still am. I would like to find a good, fulfilling job – interesting and useful. I would like to put the knowledge I gained during my studies into action. I would like to spend more time with my boyfriend: rent, or even buy, an apartment together. My dream for the future is to live somewhere close to the sea and lead a simple but satisfying life. My immediate plans are: learn new skills, brush up on the old ones and be part of interesting projects. Oh, and visit my family in Slovakia soon.