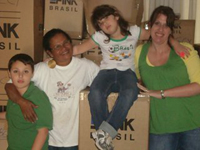 My name is Sharon F. and my family and I currently live in the metro DC area, but originally we are from Miami, Florida. I honestly thought living and growing up in Miami, a diverse multicultural city prepared me for what it would be like to live overseas. Boy was I wrong. Perhaps if it was just my hubby and I, maybe then we would have been prepared… but when we moved to Brazil my son was only 5 and my daughter was not even 3 years old. That said, it was a wonderful experience that I will always treasure.

My husband is a United States Federal Law Enforcement officer who speaks Spanish and Portuguese besides English. Because of his language skills, he was being sent overseas to Brazil a lot to work.He would go for sometimes a month at a time. The distance was hard on us, so when the opportunity arouse in 2006 for us to move over there and do a 4 year assignment… we jumped at it. Not only would be finally be together as a family… my hubby promised me a big house and a housekeeper to go with it! The 5 months it took to get all the paper work and our visas could not go quick enough.

The biggest challenges were the fact that we have a special needs child and trying to find services for our son was difficult. My boy has Asperger’s and at the time required Occupational therapy as well as speech therapy. Yes there were plenty of occupational therapist that spoke English we found, but trying to find a Speech therapist was much harder. We ended solving the problem when we found out that a certified American Speech Therapist who just so happened to be the wife of a Foreign Service officer was also stationed in Brasilia. When she left after her tour, we continued with her via the internet and Skype.

We were very fortunate as the Embassy found our housing for us. It did take a while though. We were stuck in a two bedroom apartment for about two months while they figured out where to put us. Also we were fortunate as the Embassy converted our home (electricity voltage wise) so all our appliances we brought with us worked. That saved us a lot of money. You see while service type things are very cheap in Brasilia, Brazil (things like housekeeper, gardener, even having someone come to your house to do a manicure) furniture and appliances are very very expensive.

We lived in Brasilia which is the capital. It is mostly a government time so it was filled with Embassy folks and yes some expat community members. At first we sought out other English speaking folks as it was easier. Trying to speak the local language all day is exhausting so hanging out with folks from the British, Australian and other English speaking countries was easier. Of course we became very involved in the American Embassy community too. My children attended the American School so that was another place we were able to meet people as even though the school was only about 30% American, 60% Brazilian and the rest international, everyone who went there obviously spoke English.

I would say after about a year we were comfortable enough to want to branch out and ready to really immerse ourselves in the culture and its people. Thankfully the Brazilians are some of the friendliest people I have ever met and as long as they see you trying to communicate, they will go out of their way to work with you. My children were so young when we moved there so they acclimated much quicker than I did. They had many Brazilian friends and therefore we became friends with their parents. It is such a warm culture that it was easy to slow down and appreciate it and their lifestyle.

The weather was fantastic and we had a huge home and yard. Every weekend was a different gathering: Kids birthday party, a backyard BBQ, drinks with friends. I miss that a lot. I also miss our “IZA”. Iza was much more that a housekeeper/nanny she became like a mother figure with me. My husband would often comment that he had no idea how we communicated as she did not speak a word of English and my Portuguese was horrible, but we did. My kids cried the day we left our Iza and still to this day send her cards and pictures.

When we lived there, there were no direct flights. Now thankfully there are. But for us that meant a 3 hour plane ride from Brasilia to Rio then the 8 hour flight to Miami. With layovers and time difference you are talking a whole day almost. Exhausting to do with kids, not to mention expensive. That was the other thing I did not like. The exchange rate was not great when we lived there and cost of living was high. But we saved and took advantage of being there and were able to still travel and see the incredible country that Brazil is.

DO your research ahead of time; especially if you have a child with special needs. Also don’t be scared, try and really live like the locals. I mean if you are only going to hang out with people like you then why live overseas? If you have kids go when they are younger as they are so much more adaptable and they quickly learn the language. And lastly I would say take advantage of being there and travel and see all the country. My favorite places in Brazil were Natal and Bahia. You only hear about Rio or the Amazon but there are some amazing places if you allow yourself a chance to explore.

We are here back in the States now and although I am happy be back I must admit I am getting a bit itchy to travel again. I would love to go to Europe next. My kids are older now and would really be a great age to appreciate all there is there. It is funny because even though we are proud Americans, my children are so different than most children here. They have seen how the very rich live and they have also seen poverty. They do not take for granted what a lot of kids here do because they have seen homes without door plumbing and children walking around with no shoes on. I know there are people like that here I America, but for some reason living overseas is different. My kids are more, well for lack of a better word, Worldly. I don’t want them to forget that.