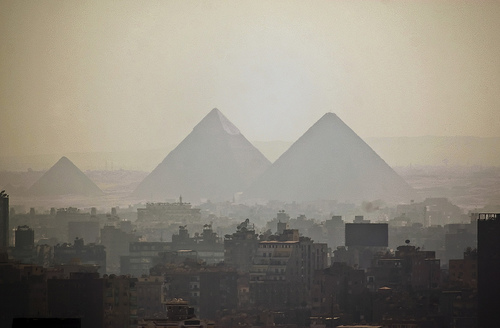 Egypt is a fascinating country, both historically and in contemporary times. Geographically, as well as culturally and politically, it ties together Asia, Africa, and Europe in many ways. Egypt is where we find some of the oldest evidence for key human inventions and developments such as agriculture, writing, cities, the nation state, and of course religion.

The ancient Egyptian religion was a complex polytheistic system that went through many changes over the 3,000 years of its existence.Most people across the world are at least somewhat familiar with certain elements of this religion, such as the pharaohs, the afterlife, the pyramids, mummification, the worship of cats, and so on. However, the ancient Egyptian religion no longer exists, except for in new, relatively small religious groups that are trying to revive and reconstruct it based on what we know about the past.

Today, the main religious beliefs in Egypt are Islam, Christianity, and Judaism – these are the only religions that are officially recognized and whose followers are granted freedom of religion. In addition, there are a small number of followers of the Bahá’í faith, as well as agnostics and atheists, but they are not recognized by the state and may suffer a considerable amount of persecution.

We asked Mohammed Khairat from Egyptian Streets whether it is easy to find diverse places to worship in Egypt.

“Egypt is a predominantly Muslim country, with Coptic Christians forming up to 10% of the population. In the past, Egypt had a significant Jewish population, but this declined following the formation of the Israeli state and the following conflicts in the Middle East.

In regards to places of worship, Mosques are widely prevalent in Egypt. In fact, Cairo is known as the city of a thousand minarets. Coptic Christians have long asked for greater freedom to construct churches, but this has proven to still be an issue.”

Below is a brief guide to some of the religious beliefs found in Egypt.

The majority of people in Egypt, roughly 90% of the population, follow Islam in one form or another. The country was once a secular state, but for several decades now, Islam has been the state religion, and the constitution requires that any new laws agree with Islamic law.

Similar to most other countries with a largely Muslim population (especially in the Middle East), Sunni Muslims are the largest group in Egypt, although many of them are also simultaneously part of native Sufi sects. Other Muslim groups, such as the Shias and the Ismailis, make up the rest of the Muslim population.

Even within these large groups, religious practice varies greatly in Egypt, both in terms of rituals and application to daily life. However, the idea that religion, Islam in particular, must inform the law is quite widespread. Egypt has a large, vocal, and influential number of Islamists, Muslims who are determined to eliminate all secular policies and make Islamic ideas the basis of all social, political, and personal life.

At the same time, there are many unique practices, especially in the more rural parts of Egypt, that would not be recognized as part of Islam in other Islamic societies in the world. These include the veneration of saints, ceremonies to drive away djinns and evil spirits, and many Sufi practices that include music and dancing.

Egypt has had a long Christian tradition, stretching right back to the earliest days of the religion. This is only natural, since the country is so close to the birthplace of Christianity. Today, Christians are the largest religious minority in Egypt, making up roughly 10% of the country’s population. Almost all of Egypt’s Christian population is Oriental Orthodox, belonging specifically to the Coptic Orthodox Church of Alexandria.

Other Christian groups include the Coptic Catholic Church and a few Coptic Protestant churches that have their origins within Egypt, as well as “imports” such as the Greek Orthodox Church, the Latin Catholic Church, and so on. However, many of these are not native Egyptians, but immigrants and expats.

Judaism too has had a long history in Egypt, and until relatively recently there have been Egyptian Jews who were active, influential, and popular in the country’s political and cultural lives. However, for the last several decades, hostility towards Judaism has increased, and because of this the Jewish population has steadily declined. The key events and phenomena that contributed to this change included the rise of Nazism in Germany leading up to World War II, the formation of Israel, the Suez Crisis of 1956, and the Six-Day War with Israel in 1967. Today, it is estimated that there are fewer than 100 Jews in Egypt.

Egypt has a small Bahá’í community, but for anyone outside the recognized religions, life remains extremely difficult. Obtaining identity cards and other documentation is complicated, and there is a great deal of persecution, including accusations of treason and sometimes violence.

There are also quite a few agnostics and atheists in Egypt, and although some say that their numbers are steadily growing, the religious and political climate in the country makes it difficult to form a clear picture. The state continues to count them as followers of the religion that they were born with, and they face threats and violence from the public, as well as the risk of trial for apostasy by the state.

The religious climate in Egypt should be taken into consideration if you are considering a move there. We asked Mohammed what the main misconceptions are that people have about the country.

“The most common misconception, promulgated by recent media coverage, is the country’s lack of safety. When an incident occurs, it is portrayed as if the whole country is falling apart, when in fact the incident is limited to one area that often fails to impact everyday life.

Other common misconceptions relate to the developmental state of the country (i.e. it’s not just a desert here!) and the extent of conservatism (Egypt’s no Saudi Arabia).

However, one stereotype that is in fact true is that Egyptians are extremely hospitable. You will most likely be welcomed everywhere you go – whether it’s by strangers, your co-workers or friends – and you’ll rarely feel lonely in the midst of the hustle and bustle of Cairo, Alexandria and other large cities.”

So what can expats do to make sure their move goes smoothly? Mohammed adds:

“Plan well in advance. Research the best areas for you to live as an expatriate (in Cairo, this is Maadi, New Cairo or Zamalek), try to learn simple Arabic phrases, and research local issues ahead of arrival to ensure you’re not completely ignorant. Moreover, make sure you read travel guides that will likely provide important advice regarding how to avoid scammers upon arrival in Egypt. Otherwise, safe travels!”

Have you lived in Egypt? How did you find the experience? Share your thoughts in the comments.