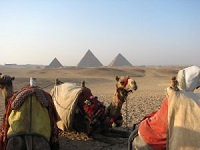 Figuring out what to expect in Egypt can be quite confusing for many expats. Most people across the world have a strange assortment of disjointed facts, myths, and complete fiction associated with Egypt. There are notions about pyramids and pharaohs’ curses, a vague awareness of a cat-worshipping ancient civilization (at least in the minds of most modern cat lovers), and some superficial knowledge of the political uprisings and upheavals of the last several years. Naturally, this fragmented picture depicts Egypt as much more other-worldly than it really is. In reality, Egypt is a modern, developed, diverse country that most expats quite readily adjust to. Nonetheless, it does have many cultural practices that may take some getting used to.• Greeting customs: Men will often greet each other with kisses on the cheek – in fact, multiple kisses, on alternating cheeks. This is typically done only when the relationship is particularly close and/or warm. In most other situations, shaking hands is quite normal, although the firm, quick handshake is not particularly valued. Handshakes tend to be loose and long-lasting. Expats may be initially uncomfortable with both practices, especially men, who, if they come from the US or most parts of Europe are culturally unused to as much casual physical contact. For women, the problem is slightly different – a man will usually wait for a woman to initiate a handshake, and if this does not happen, he will simply give a respectful bow. Unfortunately, a woman initiating a handshake may sometimes be judged as being too forward; it’s up to you to gauge your company and act accordingly. People of the opposite sex do not do the traditional kiss.
• El Shatafa: In Egypt, “Shatafa” is the word for the “bidet”. This is a little low-placed sink meant for washing the genitalia, buttocks, and anal area after one has used the toilet. It is not a uniquely Egyptian contraption (“bidet” is, after all, a French word), but physical hygiene being very important in Islamic culture, the shatafa has become extremely popular in Egypt. Expats often first mistake these fixtures for mini-tubs or oddly placed wash basins, and the idea of using one may well seem strange. However, after a while you will no doubt get used to it; and remember that some cultures might find toilet paper equally strange and horrifying.
• Fridays off: Friday is the day of rest for Muslims, and so for most people in Egypt, it’s the weekly holiday. Weekends are typically Friday and Saturday, which can be rather disorienting initially, for expats who have never encountered this part of the world before.
• Superstitions: All countries and cultures have their own superstitions. Culturally, Egypt shares some things with parts of Europe, and superstitions are on this list – warnings about cats, black magic, and jinxes will sound familiar. However, there are also some more unique local superstitions – for example, people will be quite appalled if you leave your footwear upside down. Some say that this is because the soles of shoes are considered unclean, and upturning them means facing them towards god. (As an extension, sitting in a position where the sole of your shoe is facing another person is also considered quite rude.) There are also superstitions regarding scissors and the color blue, and you may encounter others during your time in Egypt. The best course of action is to politely go along with them when you are in company, unless it causes you exceptional discomfort or outrage, in which case you can politely smile and say you don’t follow superstitions even back home.
• Attitude to punctuality: In professional life, Egyptians are relatively punctual, and tend to be even more so when dealing with foreigners. However, in most personal dealings, punctuality is not particularly highly valued in Egypt. (Also, when we say “professional” we mean mostly corporations and big businesses – your grocer and your electrician are likely to take a much more relaxed attitude to schedules.) This can be quite frustrating to many people, but our advice is to simply join them. Trying to fight this will only leave you frustrated, unhappy and stressed out. It’s not rudeness, it is simply a cultural attitude to time. Remember that it gives you great leeway too, when you’re running late.