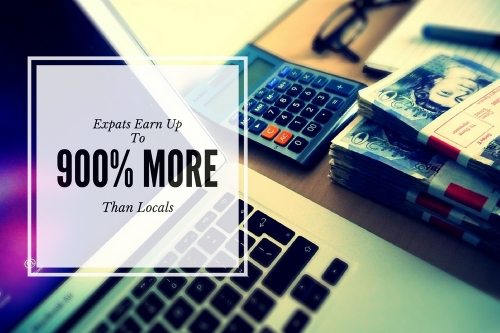 We often warn potential expats to be careful with their cash, making sure that their income overseas can not only support their lives abroad but feather the nest for the return home too. This has lead many companies to offer competitive salaries and generous benefits packages to expats, hoping to attract the cream of the crop.Attracting talent from overseas can introduce new ideas into a business and injects a new lease of life into operations, but bringing in experts from abroad can lead to undervaluing the local expertise.

It’s hardly surprising that some expats report encountering resentment from staff born and raised in-country. New arrivals in any business often ruffle feathers, especially amongst colleagues who may have been passed up for promotion into the newly-filled role. Imagine how galling it must be to find that not only has the new guy in the office been flown in from overseas, but he’s earning up to 900% more than you.

Even if you do the same work, with more experience in the business and a lifetime of experience in the local business culture, this new arrival is not only taking home more cash but enjoying extra perks. His kids may be going to the best school in town on business expenses and even the family’s luxury home may be provided on the company dime.

A study of aid workers’ salaries across the work showed massive discrepancies between expat and local earnings, even in a sector which aims to be equitable between the two types of employees.

Academics from Massey University in New Zealand and Trinity College Dublin, Ireland partnered with the UK’s Economic and Social Research Council (ESRC). The ERSC is a UK government funded think-tank which researches and advises on social and economic policy as well as supporting researchers in the fields.

The staff surveyed were employed across a range of sectors including aid, education, government and business, holding jobs as engineers, teachers and managers. Both the expats and the local staff included experts in their respective fields.

In some countries the local staff reported that their income was too low to survive on, with 80% of local workers reporting insufficient pay. Across the six territories investigated – Malawi, Uganda, India, China, the Solomon Islands and Papua New Guinea – the study found a massive discrepancy between the income of expats and locals.

Of course, the study does not compare every economy on the planet and notably absent from the survey are the booming economies which hold the biggest draw for expats. It is likely that expats still enjoy an elevated salary and extra perks not available to native staff. Japan, according to a survey by ECA, is the most generous expat employer in Asia, offering middle managers packages worth USD$375,000 a year.

The research’s main focus is on pay in the aid sector, providing a critical look at the failure of the Paris Declaration of 2005. At the Second High Level Forum on Aid Effectiveness, it was recognized by governments and humanitarian groups that aid work should be producing better results in the areas in which is was delivered.

The Forum concluded with the institution of five principles which would increase the effectiveness of aid operations:

1. Ownership: Developing countries set their own strategies for poverty reduction, improve their institutions and tackle corruption.

2. Alignment: Donor countries align behind these objectives and use local systems.

5. Mutual accountability: Donors and partners are accountable for development results.

ADDUP’s research implies that in the 11 years since the Paris Forum, little has been done to implement these principles and developing countries are a suffering due to the policies of wealthier nations. With expats receiving between 400 and 900% more pay than equally skilled local counterparts, questions are raised about the appropriate use of funds.

Moreover, ADDUP’s authors suggest that the inequality may be actively undermining aid efforts. “Although pay may not be a primary motive for development workers, discrepancies in pay nonetheless have the potential to influence perceptions of organisational justice, which can in turn affect work performance. Moreover, because injustice is a motivation for much aid itself, perceptions of unfairness in aid work may inherently undermine its necessary constituents, especially cooperation and capacity building.”

It’s not just the academics expressing concern over the situation. Writing for The Guardian as The Secret Aid Worker (TSAW), an experienced and well qualified East African describes their experience with pay inequality, “given my foreign qualifications, I negotiated hard for my salary of over USD$1,500 (£1,000) a month, making me one of the highest paid local staff,” they write. “On average, a local employee receives a third of that, (if they are lucky) as my organisation reminds me on those times I dare to raise my head above the parapet.”

TSAW goes on to describe how expat workers may earn as much as USD$3,000 and USD$8,000 each month, not an uncommon salary in the industry. They also allege that in one “particularly renowned UN programme, the highest paid local employee receives less than the international intern.”

Pay rates become even more inflated for experts brought in for short-term contracts and specific projects. “International consultants live on another planet entirely,” writes TSAW. “Usually the upper limit is USD$800 a day, but I have encountered short-term consultants being paid up to USD$3,000 a day. One consultant I know was flown in for 12 days and earned USD $36,000, six times the average annual salary of a local employee.”

It’s not just the pay that causes frustration. NGOs offer expats more rest days, luxury accommodation, security protection, improved dining facilities, subsidies for children’s schooling and a range of other perks. “Do I, as a local, not deserve the same standard of living?”, writes TSAW, “do expat colleagues deserve these privileges more than I do? Must I accept unequal treatment because they are bringing in goods and services that are otherwise unavailable?”

The disparity has been noted by the expat aid workers themselves. Working for the UN in the Democratic Republic of Congo, Valerie told thisisafrica.me, “as an expat, I am paid more than local colleagues who (obviously) have a better grasp of the country than I do,” She said. “And I sense that they suffer [because of] foreign ‘experts’ who are fundamentally less useful at the job, linguistically and culturally, and who are more likely to stay only for a short-term period.”

Valerie asserts that expats working for charities, NGOs and national governments are aware of the pay scales but, “most people turn a blind eye and pretend that this is okay, but it’s not.”

Promotion opportunities for local staff are also a bone of contention. Expats may see themselves rapidly rising through the ranks, climbing higher in an organization without necessarily having the experience to fulfil their roles. Zeinab told thisisafrica.me of an instance where a country manager had been the intern just two years before, securing the job over local staff with considerably more experience. “She knew absolutely nothing about the job or the local context and now she was my boss.”

This is causing dysfunctional working relationships between locals and expats assigned to the same projects. “They don’t listen, they think they know it all. I just watch them quietly,” said one Ghanaian working with an Italian construction company.

The Secret Aid Worker compares this situation to the colonial governments many developing countries struggled to win independence from. “Foreign ‘experts’ are assumed to know more about how to improve local lives than the locals themselves,” they write, “with foreigners holding the power and the money, the neo-colonialist legacy continues. We locals who are lucky enough to be employed by NGOs bite our tongues and accept our relative privilege over fellow citizens, not daring to risk questioning the inequality within the workplace lest we lose our jobs.”

The sentiment is repeated by thisisafrica.me. “The expat pay system also has more than just a tinge of racism about it – it contributes to foreigners feeling superior to locals, and that superiority is reinforced by their monthly pay checks.”

It’s not just the relations between expats, locals, NGOs and governments at risk; the discrepancy could actually damage the nations they are all trying to help. Not only are these pay strategies undermining their own poverty reduction initiatives, but they are swallowing up a sizable portion of the aid budget.

Nations like Australia are instituting significant reductions on the amount of money they spend on overseas development, meaning a greater proportion of their contribution is going straight into the pockets of expat staff. With less to spend on delivering programmes, their development is adversely affected.

The impact also has a long-term effect. With so many local staff facing financial hardship due to low wages, many are tempted away by jobs in the private sector or for jobs overseas.

This ‘brain drain’ effect harms the long term development of the country and undermines the ownership principle enshrined in the Paris Declaration. In order to combat this, ADDUP’s authors set up a partnership called ProjectFair with CHS Alliance and Birches Group. ProjectFair is “to develop evidence-informed good practice in the domain of sustainable livelihood and living wages for aid and humanitarian workers.”

It is hoped that new policies can be developed to ensure the sector still gets the best international talent, but without alienating local workers or harming the long-term development goals.

Whilst the study is focused on the aid industry, these same factors can come into play in other sectors but more research needs to be done into its effect on a country-by-country basis.

Until that is done, the aid community will hopefully address ADDUP’s findings and apply them alongside the goals that replaced the Paris Declaration. The sustainable development goals (SDGs) highlight the importance of equality and establishing sustainable livelihoods to beat poverty once and for all.