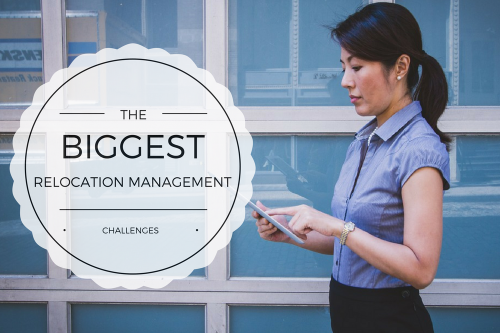 The number one issue for relocation managers, as reported by 78% of those questioned in a survey, is the pressure to control costs when relocating an employee.

While many relocation managers may highlight issues with moving families for an overseas assignment, that problem is outweighed by a ratio of 5:1 with issues over cost.

That’s because cost control is a big issue within organisations and they are looking for expat deployment to be a cost-effective and worthwhile undertaking.The next biggest problem for relocation managers is the challenge of having to comply with various regulations and laws.

Among the other most common issues are the long waiting times for obtaining a work visa, problems with payroll, and finding suitable housing.

These are just some of the challenges highlighted in a report from Cartus Corporation which helps firms move employees around the world.

Of those questioned, 63% of relocation managers said that complying with laws and regulations created a set of problems that varied from country to country.

Relocation managers say that lots of planning needs to be done ahead of the employee actually moving to a new country because of the time it takes to gain relevant visas. This can take anything from three weeks to six months, depending on the destination country.

The vice president of Cartus, Matt Spinolo, said: “Senior management find that the processes such as obtaining work permits can be lengthy and complex which can be a challenge for the business and often a frustrating one for the employee.”

The next big challenge facing companies wanting to relocate employees is the question of payroll.

Of those who responded to the survey, 51% of relocation managers said the biggest issue in payroll is currency fluctuation which, unless mitigating steps are taken, means that the employee’s pay will vary from month to month.

While this will cause headaches, and potentially some upset to the employee, there are also problems with payroll inflexibility and big differences between pay in the two countries.

Housing is also a major problem, according to 64% of relocation managers, who say that the high cost of finding somewhere for the employee to live is an issue.

Part of this is down to the employee’s expectations. They are often unwilling to move somewhere that is of lower quality than they are expecting or is not adequately furnished.

Mr Spinolo explains: “The challenge is for companies to set employees’ expectations upfront, and that is not just for housing quality but also for them to be decisive because competition for expat-style housing can be stiff.”

The age of employees who are being offered global assignments has also been getting younger. According to Cartus, the number of millennials undertaking assignments has grown by 3% in two years from 24% in 2013 to 27% this year.

This rise in numbers also helps to explain why there are fewer Generation X employees, that is people aged between 35 and 49 years, who are moving overseas for work reasons. That has dropped by five percentage points, from 56% in 2013 to 51% today.

In a separate report, Cartus also looked at the relocation issues for big employers who are looking to move up to 100 of their employees every year. Some of the problems being faced by these firms are very different.

While the question of costs topped the list of challenges, relocation managers for large firms also had to deal with exception requests from employees, managers making decisions about the relocation process that were outside of policy and inadequate tax planning. There is also, according to nearly one in five relocation managers, an issue with housing budgets not being accurate.

What surveys like this reveal is that an employer’s policy is often not meeting the needs of its desire to transfer workers around the world and when managers make decisions outside of established policy there are often problems as a result.

However, when relocation services look at where an employee is being relocated, the destinations are very similar. The top three are the US, Hong Kong and the UK, say Cartus.

While these are very popular destinations, they also bring with them unique and formidable challenges for the relocation manager.

US ranks top for challenges

The US ranks the top for creating challenges with housing delivering problems since costs are rising and the market for expat homes is becoming tighter. In addition, many landlords are also requesting that rents are paid upfront.

There’s also a lack of suitable housing for expats, particularly in rural locations, and housing budgets are affected by exchange rate fluctuations.

The problem in Hong Kong for relocation managers is in finding quality schools for expats with children.

While there are new schools being constructed and more opening over the next few years, there’s a distinct lack of international school places. Relocation experts say expats with families looking to move to Hong Kong should begin their planning well in advance so they can obtain a school place.

It should also be noted that 77% of relocation managers said there was a lack of places in desirable international schools around the world for expat children.

Expats in the UK

When expats are being moved to the UK, housing is also a major problem, particularly in London, where price growth outstrips the rest of the country. There’s also a huge demand for quality rental properties and again this is an issue for 64% of relocation managers who say housing costs cause problems.

When the data is analysed, 52% of relocation managers say that their employees found that the quality of their housing during an assignment was very different to their expectations.

When relocation managers in the UK are questioned about the most popular destinations for job assignments, the survey revealed that the United States is in first place, followed by India and then Switzerland.

UK-based relocation managers also highlight problems with the US curriculum which may cause challenges for UK expats with school-age children. The managers highlight that when an assignment comes to an end, the children can experience difficulties when they come to re-enroll in the UK’s schooling system.

This issue of finding schools for expats with families has also been highlighted in a report from real estate firm Knight Frank, which says that finding the right school is the biggest challenge when it comes to relocating families.

That’s despite whether the employer is moving an employee 100 miles away or to the other side of the world. In a report, the firm points out that children are leaving their friends and family behind and still face challenging hurdles when moving to a new school where they have to make new friends. That’s on top having to do well in their new school.

Knight Frank quotes one magazine that says many expat families are now demanding that a school placement is found before an executive accepts a new overseas assignment.

The firm also says expats should visit the school in question, or indeed several, before they move overseas and also look at local housing, particularly homes that are close to the school itself.

Again, when expats are moved to India, housing is the biggest challenge, with most expats looking for homes in one of the many gated communities in the country. Supply is severely restricted however.

Employers are also finding problems when searching for housing online in India since the information is often outdated and unreliable and some landlords continue to show property until a lease has been signed. This means many employers and relocation managers have unrealistic expectations about the number of homes that are available since many will remain online but are effectively unavailable.

Housing is also a problem for expats from the UK relocating to Switzerland, with employers looking for value on housing costs.

When surveys look at the importance for business goals, North America ranks in first place, followed by Europe and then China with relocation managers saying their employers are looking to exploit opportunities in these regions.

The reason why the US is crucial to many employers is that it has the world’s largest economy and it is where businesses need to move their top talent to enjoy the opportunities available.

In fourth place in the Cartus relocation managers survey is the problem of moving employees to a country with limited infrastructure, an issue for 39% of relocation managers, and finding suitable candidates in an employer’s local market.

Relocation managers also face issues with compensation packages and they struggle to attract suitably qualified candidates for an international assignment; that ranks as the seventh biggest challenge on the list.

There are also problems with safety and security for 26% of relocation managers, while in 10th place, for 25% of respondents, are issues with payroll and currency.

Among the trends that are beginning to appear for relocating employees around the world is a growing need to relocate same-sex partners, regardless of their recognised status, and for 80% of employers there is a slowly growing demand to re-locate elderly parents though employers offering full support is rare.

The issue of finding suitable candidates for an expat assignment has been reflected in a survey carried out by the Global Alliance in Business Education (CEMS) with 87% of HR managers believing that foreign-language skills are important for an overseas assignment.

Indeed, the survey also highlights some issues that are not flagged up by the relocation managers’ survey and they include expats struggling to understand a new culture, for 48% of HR managers, culture shock for 24% and communication and language issues for 16%.

The survey also highlights issues with finding a suitable position for when an expat returns home and for controlling costs and visa problems.

The executive director of CEMS, Roland Siegers, said: “Many employers are still having trouble recruiting the right people and respondents identify the challenges involved in placing employees around the world including language barriers and cultural awareness.”

Another survey also highlights a problem with ‘trailing spouses’ of expats who undertake an overseas assignment.

The findings from InterNations, a social group for expats, revealed that the biggest problem is that the expat’s spouse struggles to find work. It’s an issue for 76% of those who responded despite their spouses being highly educated, with around half of them having degrees.

Essentially, relocating employees to undertake work assignments around the world has never been an easy task, and it appears from the research that it’s not getting any easier either.

This means that despite the trials and tribulations in helping to move an employee overseas, the rewards for doing so are reflected within the business and in personal growth and satisfaction.