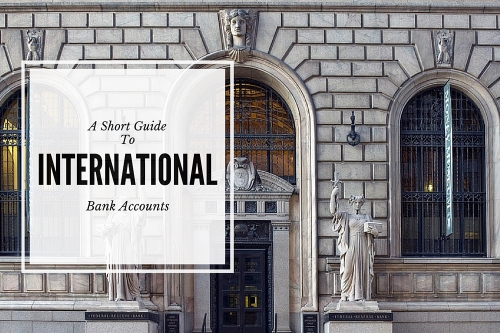 For those thinking of moving regularly while overseas, an international bank will be the best financial solution for their needs.

While they may consider retaining their existing bank account, they will soon appreciate when they withdraw local currency that their transaction costs will begin to mount through currency conversions. However, with an international account they can save money on these charges.Some expats also don’t appreciate that just because their bank may be an international organisation, this does not mean they will save money by just using their normal account.

Finding the right international bank account is an important process and there are several options available.

It’s a simple process to open an international bank account before moving overseas though it also makes sense to retain the original bank account for visits home or even for a return after completing an expat assignment.

It’s also important to have some transactions passing through the original account on a regular basis. Many expats, for instance, will have a mortgage that needs be paid on their home.

Indeed, some banks will require a minimum of cash being deposited or for several direct debits to be carried out every month to avoid steep charges – or even from having their bank account closed because of ‘inactivity’.

International bank accounts allow an expat to operate with different currencies and should really be arranged before leaving their home country, since they may need a residence address before the bank will allow the account to be opened.

In addition, having an international account means the expat can bank between two currencies and also transfer cash more easily between the two accounts.

It’s this ability to transfer money more easily which is the big attraction since transaction fees will be kept to a minimum, though the account may carry a monthly charge.

In addition, expats can be reassured their money will be safe in an international bank account, and it will also make moving their hard-earned cash back to their home country much easier when they decide to return home.

For instance, a British expat working and living in the US can choose their international bank account to be in US dollars; if they live in Europe, it can be a Euro account.

It should be noted too that some expats will use their offshore account for playing the exchange rates as a way to boost their income, so when sterling is weak they will cash their currency back into pounds. This is a risky endeavour since a poor exchange rate will also risk the profits made when it comes to changing the savings that are made back into sterling.

It’s not just expats working abroad who gain by having an international bank account. Those who are planning to retire overseas can save themselves money by opening an offshore savings account, which will enable them to choose between currencies and then change it back easily to their own currency when the exchange rate is more favourable.

Many banks now have specialist teams to ensure that expats get the right international bank account for their needs – there is a huge number of banks and accounts to choose from.

It should also be appreciated that international bank accounts are usually, but not always, offshore accounts which means they are based in places like the Channel Islands or Gibraltar, for instance. However, expats should also appreciate that some international accounts are simply an account in a UK-based bank which conducts its transactions in a foreign currency.

An expat could open a bank account in the country where they are working or living, which makes being paid in the local currency and ability to conduct their day-to-day banking much simpler. These accounts make sense for those who like to ‘keep things simple’.

It’s also important that any expat who is thinking of opening an offshore savings account ensures they are aware of any tax commitments and they should always seek suitable financial advice from someone who understands how they work and what the reporting obligations are.

Indeed, for British expats particularly they should be aware that some offshore accounts are backed by the Financial Services Compensation Scheme (FSCS) so if they lose money – currently up to £75,000 – they will receive compensation. For those banks not covered by the FSCS, the expat will have no source for recompense.

However, the account may be governed by the country in which it is registered. For offshore banks licensed under the Guernsey Financial Services Commission, the first £50,000 is covered under their compensation scheme. In the Isle of Man, a similar scheme will protect up to £50,000 per saver.

It should also be appreciated that international bank accounts have traditionally been seen as a way to avoid tax, but this view no longer holds true since many jurisdictions will reveal details of those who have an offshore bank account to the account holder’s own tax authority.

The bottom line is that international or offshore bank accounts are suitable for anybody who is working overseas or who wants to make a foreign investment; most High Street banks will provide banking services for expats but some of the charges are also quite hefty – for instance, some offshore banks will charge £25 for a withdrawal which makes them less appealing for expats who need regular access to their cash; though some banks do allow accounts be opened with just £1.

Possibly the best known bank for expats is HSBC, who offer an expat current account. New customers should be aware that the initial minimum deposit is £5,000, and customers are also expected to have another £60,000 invested or saved with the bank. The bank offers a Visa debit card in various currencies, international banking and telephone support.

This HSBC bank account is ideal for those who already have an account with the bank, and who are planning to travel regularly between countries. It’s also a great account for those outside of the UK who are looking to make regular international payments and need to save in various currencies.

The attraction of 24/7 telephone banking is also a major plus and while there’s no annual or monthly charge, charges may apply for some transactions. There are no country restrictions so long as the expat keeps their bank account above the minimum balance.

Standard Bank also has its Optimum account which has been designed for expats with a minimum deposit of £4,000 – or $6,000 or the equivalent in another currency – which is necessary to avoid monthly fees and charges. Another important aspect to the Standard Bank’s offering is that it’s no longer just for high net worth individuals.

Alongside its small deposit, the bank offers its Optimum account in either dollars, Sterling or Euros. Again, it’s a good choice for expats who are planning on moving between countries and who need a Visa debit card for transactions. This account is also good for those looking to study abroad.

For expats who will be earning large salaries while working overseas, the Lloyd’s Premier International account is worth a close look. It’s particularly good for someone who is needing to manage various currencies. The account is held offshore in the Isle of Man or Gibraltar. Again, the account comes in either dollars, Sterling or Euros with a Visa debit card in any currency.

Another big attraction for the Lloyd’s offering is the expat will have a dedicated relationship manager and the account comes with worldwide travel insurance too.

Essentially, this account is ideal for those expats who earn more than £100,000 a year or who also have savings of a similar amount. It’s also a nice choice for those who would like to enjoy a private banking experience.

Barclays offers expats a range of banking solutions and like HSBC, the account holder will need to maintain at least £25,000, or its currency equivalent, in investments and savings with them. However, clients must also have at least £100,000 invested with them and they will have a dedicated relationship manager to help the expat plan their financial goals. As with their competitors, Barclays also offers multi-currency accounts and the ability to manage money offshore.

The Barclays International bank account allows an expat to open an account in either Sterling, dollars or Euros and the funds can be held in the UK or offshore in the Isle of Man or Jersey. The accounts are accessible by telephone or online banking – open the account in Sterling and the bank’s mobile phone banking can be used, for instance.

Another consideration for expats looking for international bank accounts is to check whether the bank is offering an international savings account when opening a current account. For some this will be a very useful addition.

Offshore savings accounts also come with both fixed and variable interest rates with the latter offering easier access to the expat’s money while having introductory bonuses. Fixed rate accounts are usually for expats to lock away their savings for up to five years.

As with their onshore siblings, offshore savings accounts also offer fairly low rates of interest. For instance, the Skipton International is offering a day-to-day offshore savings account with a variable rate of 1.25%, with interest payable monthly or annually. The NatWest account pays 1.51%, as does the Isle of Man Bank, though Nationwide International is offering a three-year fixed bond at 1.6% with interest payable monthly. The Lloyds Bank International Regular Saver account pays 1%, as does the Santander Manx Loyalty eSaver and the Barclays Wealth International Reserve, an offshore variable account, which pays 0.25% with no notice.

While offshore bank accounts are no longer the disreputable way for evading tax, the interest will be paid without any tax being deducted. For British expats, the rules changed in April 2016 so offshore and onshore savings account will not have any tax deducted from the interest paid because basic rate taxpayers have no tax to pay for the first £1,000 of interest while for higher rate taxpayers, the threshold is £500.

It should also be noted that all deposits and interest for an offshore bank account should be declared to the relevant tax authorities since failure to do so could lead to a large fine along with interest being charged on the amount owed.

However, expats should also appreciate that many countries operate a ‘double tax agreement’ so their income will not be taxed twice.

Expat Focus does not endorse or recommend any offshore bank and the bank details here are purely for information. It is important before making any financial decision that expats seek independent financial advice to ensure they get the international bank account best suited for their needs.