When expats move abroad for work they want to earn the best money and enjoy their new life, but which are the best locations for expats to enjoy both?

The question isn’t easy to answer since we all have different needs as well as expectations when we decide to follow a career path overseas. However, with surveys available of people who have already moved abroad, finding the most popular countries and cities is made much easier.And that’s regardless of where the expat originally comes from, whether they are from the US, UK or Europe.

The most recent survey by NatWest bank found that Singapore was number one with expats for money and quality of life.

Indeed, there’s a lot to recommend Singapore, which has a very large expat community with around four in 10 of the working population coming from another country. Also, Singapore is welcoming to expats and flexible over immigration.

The money is also good. Two in three expats report that they are earning more than £125,000 a year in industries ranging from finance and construction to manufacturing.

The other big attraction for moving to Singapore for work is that for an expat under the age of 25 they do not need a job in place; they can apply for a six-month work only visa and find work there.

A spokesman for NatWest’s international personal banking service said: “While Canada and Australia are still highly rated, particular by retiring expats, growing numbers are going abroad for their career which is leading to countries like Singapore becoming increasingly popular.”

Alongside this, expats also rated Singapore as their number one choice, up from fourth place in their previous survey.

However, the NatWest rankings are based on a variety of criteria where quality of life is highly rated.

The reasons for Singapore’s popularity, according to the survey, is that 86% of respondents said their health had improved after moving there and they were drawn by better weather and jobs.

NatWest’s head of international personal banking, Dave Isley, said: “Singapore is a vibrant nation with lots of opportunities for career-focused expats. There’s improved health and beautiful surroundings so can blame ambitious people who are choosing the sunny city state?
It’s also a good example of not having to choose between pleasure and business!”

According to NatWest, the United Arab Emirates is in second place followed by China, which is growing in popularity among expats from around the world.

They are followed by New Zealand, Hong Kong and Canada – expats are increasingly moving to this North American country because they can get more for their money and enjoy stunning scenery.

In seventh place is Australia, which is seeing growing numbers of expats relocate permanently rather than for temporary jobs, as many people are looking to make a fresh start. 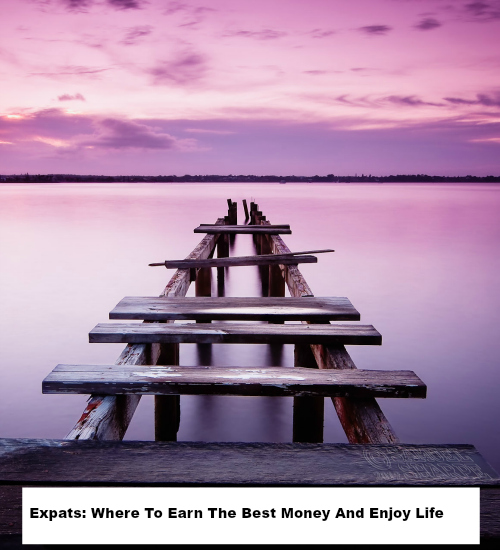 Indeed, there is a growing trend of expats moving abroad for better living conditions rather than pursuing an ambitious career, as underlined by a survey from MoveHub, an international relocations company.

In addition, 63% of expats said they were happy or very happy, compared with 53% of those were not worked abroad.

Another key indicator is that 40% of expats who had returned home were living on a good salary; just 28% of those would never worked overseas said they had a good income.

Expat surveys also highlight the age range of expats and the type of work they are going for.

The older the expat, the more chance they are looking to spend their retirement in the sun, but one in four expats are now aged between 25 and 35, and they are heading overseas for temporary jobs.

It’s also much easier now for expats to obtain temporary work visas for growing numbers of countries which are keen to employ ambitious, educated and experienced people. This helps to explain why countries that have been popular destinations for years are now being overtaken by the likes of Singapore, China and Hong Kong.

Life as an expat is also increasingly appealing to women, who now make up nearly half of all expats – just four years ago only one in three expats were women.

A from expat networking group InterNations questioned expats living in 195 countries. They found that Ecuador was the most popular country for the second year running.

Among the reasons given by expats living there were the low cost of living (91% of respondents), quality affordable healthcare and good weather.

However, it’s the quality of life expats are finding in Ecuador that also helps them rate the country highly; many expats said their personal happiness had been boosted and they have a wide variety of leisure activities to undertake. It is also easy to move and settle into the country.

One of the least popular countries for expats is Kuwait, where respondents said it was difficult to make friends and to settle in, there were few leisure activities, and happiness and quality of life were low.

The remainder of the survey reveals Mexico, Malta, Singapore and Luxembourg are very popular, as are New Zealand, Thailand, Panama and Canada, with Australia in 10th place.

The best country for integration is reportedly Mexico, where respondents said they learned the language easily, made lots of friends and found everyone friendly. Indeed, the US’ Migration Policy Institute has highlighted that Mexico is home to the largest number of US expats outside of America – there are 850,000 living ‘over the border’.

The best destination for expats’ family life is Australia, where respondents said education and childcare were excellent and their feelings of well-being improved. The worst country was Saudi Arabia.

Looking at cities rather than countries, the findings from consultancy firm Mercer gave some surprising results, with the Austrian city of Vienna being ranked number one.

Mercer says that despite economic uncertainty, cities in Western Europe continue to enjoy some of the world’s highest quality of living standards. Seven European cities are in the top 10.

After Vienna, the top five is made up of Zürich, Switzerland; Auckland in New Zealand; Munich in Germany; and Vancouver, Canada. The rest of the list consists of Düsseldorf and Frankfurt in Germany in sixth and seventh place; Geneva, Switzerland, in eighth; Copenhagen, Denmark in ninth, and in 10th place is Sydney, Australia.

Interestingly, Singapore was only ranked as the 26th best city in the Mercer study with popular destinations such as New York, Paris, London, Dubai and Hong Kong also not making the top 20 best cities for expats.
Surprisingly, the highest rated US city is San Francisco in 28th place, followed by Boston at 34, while Chicago is in 43rd place and New York ranks in 45th. Paris is rated 37th, while London is at 39th.

In last place is Baghdad, Iraq, which beat Bangui in the Central African Republic and Sana’a in Yemen for the dubious accolade.

Where expats stay the longest

For instance, the HSBC survey reveals that while the United States is not the most popular destination for expats, it is popular for those who stay the longest.

Around 65% of expats moving to the States live there for more than five years, whereas just 44% of US expats spend a similar length of time in their host country.

Also, when the number of first-time expats are questioned, the US ranks third and those moving there are more likely to put down roots and commit themselves to becoming members of the community and starting families.

Indeed, 37% of expats told HSBC that cultural immersion in the host country was a vital part of expat life and 42% said they socialise more with Americans than they did with fellow expats. 37% of expats to the States said they found their long-term partner during their stint there.

When US expats are questioned, 39% said they preferred to meet with other expats rather than socialise with locals, two thirds said they integrated well into the host country and 58% said it was easy to build new friendships.

However, not all expats are looking for better lifestyles no matter where they hail from. 45% of those moving to the US said money was the key motive and 39% earned more than $100,000 a year. Expats also found their living costs were higher, though 59% had more disposable income.

When American expats were questioned, 30% said money was the main motivation for moving overseas and they were earning less than expats who had moved to the United States; 45% made less than $60,000 a year and just 27% made more than $100,000. Nearly all expats, whether in America or abroad, found organising their finances became more difficult.

For many expats, the issue of missing their home countries proved to be a distraction. While many of them will forge strong friendships with fellow expats, it’s the ability to feel at home which could also prove crucial in ensuring they remain for as long as they want to.

This is why a separate HSBC survey also proves fruitful, since it reveals the top 10 countries where expats can feel at home in under 12 months.
Considering that the global average is just 48% of expats feeling at home in less than a year, Bahrain tops the list with 66%, India is second with 63% and Malaysia comes third.

It’s interesting too that on 57% are Taiwan, Oman and Russia. The top 10 is completed with Spain, Indonesia and Vietnam on 56%.
The bottom line for all expats looking for more money and for a better quality of the life overseas is to think very carefully about your own personal criteria and whether the country you want to move to will provide that for you.