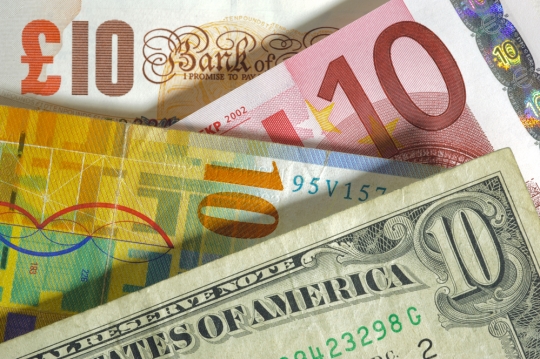 Moving abroad can be a long process with a never-ending to-do list – buy a house, find a job, learn a new language, find the kids a new school, transfer savings overseas – the checklist can be daunting to say the least. One of the most important things you can research before you go is your new destination’s currency and what causes it to fluctuate.This will be useful when you need to make international money transfers, like the kind you’ll use when you buy a house overseas. Brushing up on what can impact your chosen currency pair can help you to make smarter decisions about when to make a transfer and potentially help you save massive amounts of pounds, euros, US dollars, or whatever other currency you might need.

Why do exchange rates affect a house purchase?

No matter whether you’re buying in Tokyo, Texas, Brisbane, Los Angeles, or Berlin, you’ll have to consider what the exchange rate is doing before you move. If for instance you have a £300,000 house hunting budget for a property overseas, with currency fluctuations and market developments, it’s likely your budget will change every day.

Perhaps even more importantly, if you had agreed to buy a house in June and the process took a few months until September or October to complete, you could find yourself €60,000 short, causing you to start your new life abroad on a tighter budget.

Only seven major currencies make up 80% of the foreign exchange (forex) market. Exchange rates can move on a number of things – one day you might see a great rate and the next day you might be disappointed and find that it’s fallen. One thing to bear in mind about the market, is that it’s always moving.

Predominantly, market fluctuations are caused by economic data releases. There are plenty of economic calendars which list different pieces of data that show how an economy has performed in recent months. For larger countries like the US, some data are published more frequently than smaller countries like New Zealand.

These pieces of data aim to offer some insight into the health of the economy, measuring factors like inflation, growth rate, employment, retail sales, and confidence. These figures can cause exchange rates to fall or soar, and so if you’re thinking of making a currency transfer, it’s important to plan when to trade so you don’t find yourself stuck with a less appealing rate. A poor exchange rate could see you receive thousands less when you transfer your life savings or funds to buy a house overseas.

Another factor that can cause currencies to become unstable are political events. If there’s an election, a referendum, or political instability in a nation, it’s likely the domestic currency will fall. Markets don’t like uncertainty and so you may find when there’s geo-political tensions, currencies weaken and commodity prices (like gold) strengthen.

Brexit is a perfect example of this; following the June referendum the pound softened against other currency majors as investors attempted to price in the damage leaving the European Union would have on the British economy. This is something experts are still trying to work out as negotiations continue, which makes Sterling volatile at the moment.

Additionally, environmental and unexpected factors can hit a currency dramatically. For instance, if a country suffers an act of terrorism, the currency will usually decline. The same goes for any natural disasters like a tsunami or major earthquake. In a lot of these instances, popularity of safe-haven assets will soar.

Some currencies are prone to extra fluctuations dependent on how a commodity – usually exported by the respective nation—is performing; these are known as commodity currencies.

The Aussie dollar is sensitive to a number of commodities, meaning that its movement can be varied. Australia is the world’s third-largest producer of gold and so when the value of the precious metal increases, the Australian dollar tends to appreciate along with it.

The Australian dollar is also impacted by the price of steel as its largest commodity is iron ore. Developments in the world of construction, especially in China as it’s Australia’s largest trading partner, can cause movements in the currency market.

Although quite isolated from the rest of the world, the Australian and New Zealand economies are closely linked due to their close proximity to one another. If one country does well, it’s likely that the currency of both nations will increase.

Just a stone’s throw away from Australia, New Zealand’s native currency, the Kiwi dollar, is also impacted by commodity prices – in particular, dairy. New Zealand’s most lucrative commodity is dairy products and the currency value can correlate to how well prices are performing.

New Zealand has dairy auctions every fortnight and the Kiwi dollar may sink ahead of the event in anticipation, as well as moving in the aftermath of the auction.

If oil does well, the Canadian dollar is especially likely to increase against the US dollar (CAD/USD) as oil prices are denominated in US dollars.

There are two main safe-haven currencies that investors tend to lean toward if something dramatic happens in the world. These are the Swiss franc and the Japanese yen. These safe-haven currencies are expected to hold their value, even if the market is in turmoil. If you’re planning on expatriating to Switzerland or Japan, it can be hard to know when the most favourable time to make a trade is – especially amid so much global uncertainty and unfolding political events.

The yen has been a safe-haven currency for a number of years and investors gravitate towards it whenever uncertainty shakes the market. If you look at Japan’s economic backdrop, you may struggle to see why the yen is so popular. The economy is relatively weak and the level of public debt is through the roof, not to mention there’s the almost constant risk of deflation the country battles.

Japan is a big exporting nation so it’s racked up decades of current account surpluses, which has made Japan a net creditor to the world. The total worth of foreign assets held by foreign investors is significantly lower than the value of Japanese assets held by Japanese investors too. Japan’s net external assets reach over US$3.2 trillion. Risk aversion can drive Japanese investors, companies and insurers with funds overseas to transfer money home, which will push the yen higher.

The yen is also favoured because of its carry trade. The nation has low interest rates – a monetary policy decision made by the Bank of Japan (BoJ) to ward off deflation and revive flat-lining economic growth. Investors borrow yen with low interest rates and invest it in other higher yielding assets. When the market’s in turmoil, investors will unwind their positions to pay back the yen loans and therefore cause further demand.

Some of the yen’s safe-haven properties are down to perception too – if traders know the world is in crisis, they also know the yen is going to rise so it makes sense to buy it. It’s this perception that’s branded the yen as a safe-haven asset and it seems unlikely now that it will change at any point in the near future.

The Swiss economy is also a massive exporting nation and like Japan, has surpluses of billions on its trade balance sheet. The franc is regarded as a safe-haven asset and its rise in popularity came after the Global Financial Crisis (GFC) because of a few factors. Firstly, the stability of the financial and political systems in Switzerland allow the franc to be a popular market choice.

In addition, Switzerland has a low rate of inflation and the Swiss National Bank (SNB) has quite a lot of respect in the financial world. However, the SNB did take markets by surprise when they removed the Swiss franc’s peg from the euro unexpectedly, despite bankers saying that the tie between the two currencies was important for their monetary policy just a few days earlier. If the franc becomes too popular in uncertain times and rises too much, it’s possible the SNB will step in once more, taking markets by total surprise again.

Factors that can affect USD, GBP, and EUR

The pound and US dollar are both in a similar boat at the moment, with political change taking place in both the US and EU. Sterling is likely to swing on Brexit discussions and developments as the UK enters the unknown. It’s impossible to gauge precisely what will happen when ties with the EU are severed, but economic data will be a good indicator as the process continues. If a smooth Brexit takes place, the pound may be offered some stability.

The US recently welcomed a controversial new president, one who has made lots of promises for the economic future of the country. If president Trump can uphold these promises and bolster America’s economic growth, the US dollar (also known as the Greenback), will generate more interest and rise against other majors.

Meanwhile over in the eurozone, the prospect of political change has been a major factor to influence the euro. One of the big events for the EUR exchange rate this year was the French elections that began in April. If a right-wing political leader had been elected, it would have been only a matter of time before French citizens were given a vote to decide on whether to leave the EU too. As this didn’t happen, eurozone leaders could breathe a sigh of relief and the currency rallied against its major peers.

How to navigate the market when buying a property overseas

So now you have a rough idea of some of the factors that can cause exchange rates to shift, you’ll be able to look at the markets with some more insight ahead of your overseas property purchase. But how do you possibly navigate all of these factors and predict when will be the best time to make your international money transfer? What’s more, can you coincide it with buying your house?

Speaking to a broker is one way of ensuring that you’re making the most of the market. A broker is an expert in their field and can help guide you through the process of an international money transfer and highlight important events that may cause your exchange rate to rise or fall. They can sign you up for market alerts and they can also contact you if you chosen exchange rate is experiencing noteworthy movement.

One of the other options a broker can offer you is the ability to choose an exchange rate now that might be particularly competitive, for you to use at some point in the next two years. If you know you’ve got a great exchange rate, you can start house hunting without worrying about commodity price shifts, political events or economic data, meaning your move is that much simpler.